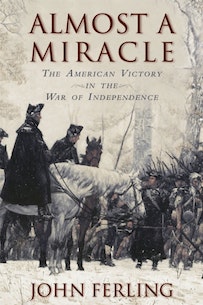 Almost A Miracle: The American Victory in the War of Independence by John Ferling

On September 11, 1777, British troops led by General Sir William Howe defeated General George Washington's American army in a particularly gruesome fight known as the Battle of Brandywine. This excerpt from John Ferling's Almost a Miracle begins with Howe's force suddenly appearing on the Americans' vulnerable right flank, an area left unprotected by Washington due to poor reconnaissance and the presence of another large British and Hessian force at the main crossing of Brandywine Creek to the south. The book shares soldiers' awed reactions to the resulting carnage, which proved a definite setback to the Americans—but not the all-out destruction Howe had hoped.

Howe's columns emerged from the thick woods and crossed Jeffries Ford in the midday heat. They had made extraordinarily good time, having covered nearly twelve miles of thick and tangled terrain in a bit more than seven hours. His men were hot and tired, and Howe paused to give them a well-deserved rest and to reconnoiter, but by about 1:30 p.m. the redcoats were on the move again. As they advanced, the British were amazed to find that a narrow defile that they had to traverse had been left undefended. They knew, however, that they could not go undetected much longer, and indeed at about this very moment word reached both [American General John] Sullivan and Washington of an enemy column so large that it caused 'Dust [to] Rise back in the Country for above an hour.'

Though still not convinced that Howe's force constituted a real threat, Washington called off the planned counterattack in the center and sent limited reinforcements to his right wing. Ninety minutes later, at 4:00 p.m., the engagement on the American right began in earnest, commencing with a ferocious bombardment that could be heard twenty-five miles away in Philadelphia, followed by the advance of ranks of British infantry, marching to martial music played by their military bands. Serious fighting began along Osbourne Hill and Birmingham Hill, where a Quaker meetinghouse stood. It was grim and bloody, and crucial. One soldier described it as 'Excessive severe.' Another characterized the armies as 'obstinate on both sides.' This was one of those moments when a truly decisive victory lay within the grasp of the British. In the past, they had often squandered these opportunities by not fighting. This time Howe's army fought, and fought hard and capably, to achieve what all knew could be a pivotal moment in this tough war.

The fighting was savage. One redcoat was amazed by the 'most infernal fire' on this field, as balls whistled and set 'trees crackling over one's head' and 'leaves falling as in autumn.' Much of the combat was at close quarters, 'almost Muzzle to Muzzle,' according to one rebel. A French volunteer with the Continentals, who had fought in many battles in Europe, declared that he had never witnessed 'So Close & Severe a fire.' A Delaware soldier thought the 'small arms roared like the rolling of a drum.' A Marylander, who had been in the army for only three days, somehow lost his gun in the midst of the battle, 'but made my escape.' Another rebel was not so fortunate. 'I was wounded,' a New Jersey soldier said, 'having a Ball with the Wad shot through my left forearm & the fuse set my coat and shirt on fire.' A private in the Bucks County, Pennsylvania, militia remembered 'bombshells and shot fell round me like hail, cutting down my comrades on every side, and tearing off the limbs of the trees like a whirlwind.' Battles are confusing to participants, a collage of noise, frantic movement, and blinding terror. Private Elisha Stevens, who fought at Brandywine, left a description that in its breathlessly unhinged way captures the disorder that he had just experienced: 'The Battel was... Cannons Roaring muskets Cracking Drums Beating Bumbs Flying all Round, men a dying woundeds Horred Grones which would Greave the Heardiest of Hearts to See Such a manner as this.'

The British had almost twice as many men in this sector as the Americans, at least at the outset, but they could not overwhelm the rebels. Some Americans—one wing of Sullivan's force—broke and fled, but most fought well. The rebels were driven from Birmingham Hill five times. They retook it four times. 'We broke and Rallied and Rallied & broke,' was how one American soldier described it. But after ninety minutes of desperate fighting the British prevailed, due primarily to sheer numbers and a spirited bayonet charge. The Americans reeled back in some disarray...

The Battle of Brandywine was a British victory. One redcoat sergeant insisted, perhaps correctly, that the rebels had 'escaped a total overthrow, that must have been the consequence of an hours more daylight.' A rebel concurred, confessing that by nightfall 'our army was something broke.' Not only did Howe possess the field, but the Americans had taken the heaviest casualties, losing about 1,000 men. The British lost about half that number. Howe once again had outgeneraled his rival... Nevertheless, Howe gained little from his victory. To achieve a truly pivotal triumph, he had to destroy Washington's army. Howe had performed ably, while Washington had again been indecisive, but at day's end the Continental army remained intact."