The British Are Coming Back! Historic Sites Commemorate 240th Anniversary of British Occupation of Philadelphia

Living History Event at Museum of the American Revolution, Oct. 14-15

PHILADELPHIA, SEPT. 18, 2017 — You know that Philadelphia was the capital city during the Revolutionary War, but did you know that it was seized by the British in 1777 and occupied for nine long months? And did you know that Independence Hall – where the Declaration of Independence was adopted in 1776 – was later used as a prison for American officers? 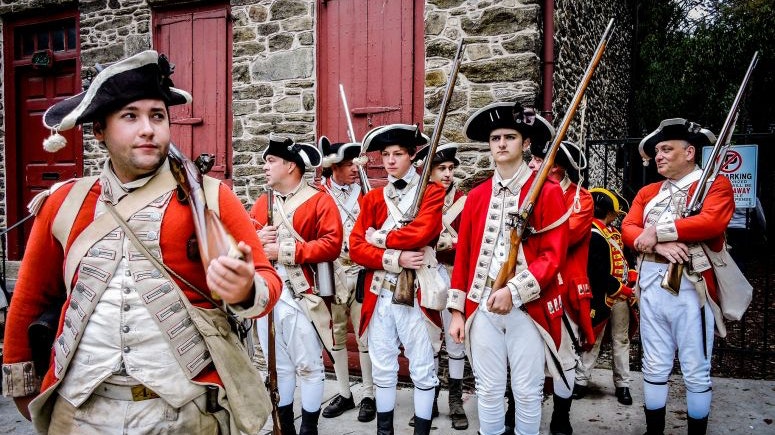 This fall, historic sites in Philadelphia will explore these lesser known stories of the Revolutionary War in commemoration of the 240th anniversary of the British occupation of Philadelphia, featuring reenactments, family-friendly activities, walking tours, and more.

On Saturday, Oct. 7 from 8:30 a.m. – 5 p.m., the Revolutionary Germantown Festival, sponsored in part by the Museum of the American Revolution, will host a full-day event featuring two reenactments of the Battle of Germantown with more than 400 reenactors on the grounds of the historic estate of Cliveden (6401 Germantown Ave.). This event is Philadelphia’s largest one-day history festival and America’s only reenactment in an urban neighborhood. Admission is free. More information is available at www.revolutionarygermantown.org.

From 4 – 8 p.m., a Battle Bash will be held at at Grumblethorpe (5267 Germantown Ave.) Join the British troops as they celebrate their victory with music, food, beer provided by Evil Genius Beer Company, and family-friendly activities.

To learn what happened after the Continental Army lost the Battle of Germantown, visitors are encouraged to visit the Museum of the American Revolution the following weekend for Occupied Philadelphia: The British Are Coming Back!, a two-day living history event on Saturday and Sunday, October 14-15. Throughout the weekend, the Museum will offer guided walking tours, special programming, and family–friendly activities exploring what life was like in the city while British forces controlled the Revolutionary capital.

Every 30 minutes from 10:30 a.m. – 4 p.m. on Saturday and 10:30 a.m. – 2 p.m. on Sunday, walking tours will step off from the Museum’s outdoor plaza, which will feature several marketplace stalls where historical interpreters will engage with visitors. The 60-minute tours also will stop at Powel House (244 S. Third St.), a PhilaLandmarks site, and City Tavern Restaurant’s back garden (138 S. 2nd Street) where visitors will meet soldiers, civilians, and spies as they learn the untold stories about the American Revolution’s darkest days.

Join the tour and receive a packet of materials that will unlock the experience, including a spy challenge to collect information on the British Army’s location and a loyalty oath that visitors can sign if they decide that they would have remained loyal to the King. Tours are free with Museum admission. There is limited capacity. Visitors can pre-register here to guarantee a spot.

Inside the Museum, guests can try on revolutionary clothing, heft a flintlock musket, and explore the galleries, where costumed educators will highlight the dark days of 1777. A printed gallery guide will highlight artifacts and exhibits related to the British occupation of Philadelphia. In the lobby, guests can cast their vote – was the British presence an occupation or a liberation? – to see where they stand among other visitors.