Revolutionary War Diary Reveals New Details about Deborah Sampson, Who Disguised Herself as a Man to Join the Continental Army

A hand-written diary of Massachusetts Revolutionary War corporal Abner Weston (1760-1830), which was recently acquired by the Museum of the American Revolution, reveals new details about the now-famous female soldier Deborah Sampson, who disguised herself as a man to fight in the Revolutionary War. 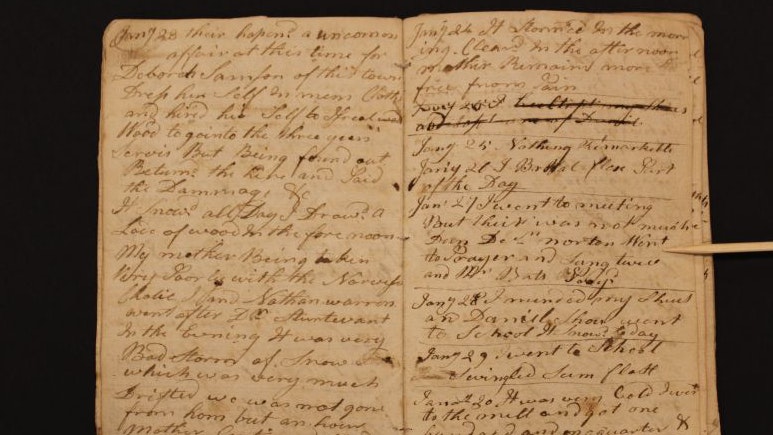 While Weston’s journal provides a significant record of his wartime experiences between campaigns, including details about drilling, training, and caring for weapons when away from the battlefield, the most noteworthy entry is his January 23, 1782 description of fellow Middleborough resident Deborah Sampson’s first documented attempt to join the Continental Army. Key details of this enlistment attempt were, until now, entirely unknown. Somewhat mysteriously, Sampson herself apparently tried to keep the story of this enlistment a secret.

“This exciting discovery sheds new light on Deborah Sampson’s incredible story and challenges assumptions about how and why she enlisted and how it was perceived by her community,” said Dr. Philip Mead, Chief Historian and Director of Curatorial Affairs for the Museum. “Finding puzzle pieces like this allows us to complete a more accurate picture of a person’s life.”

The only other 18th-century source that documents Sampson’s first enlistment is a 1782 church record from her Baptist congregation, which is unspecific about the timing of the enlistment attempt. In 1797, a biographer named Herman Mann helped Sampson assemble and publish a memoir titled The Female Review. Mann had heard early rumors of her earlier enlistment attempt, but dismissed them, saying: “I have no account of this from her, nor is the report in the least authenticated.” (Quoted in Young, Masquerade page 76)

“If Mann had had access to this journal in 1797,” Mead says, “Sampson’s story might have come down to us differently. It raises the intriguing question of why she chose not to include it in her biography.”

In addition to providing new details of Sampson’s story, Weston’s strikingly matter-of-fact account of her enlistment shows that rather than a scandal, at least one soldier simply considered her actions “uncommon.” His account gives an ordinary soldier’s perspective on a woman breaking the boundaries set by social convention, offering an important glimpse into gender attitudes in 18th-century and Revolutionary New England.

“As someone who has spent years researching and writing about Deborah, I found this account of her first enlistment fascinating,” said Alex Myers, a descendant of Sampson, who wrote Revolutionary, a fictionalized novel based on the true story of her 17 months as a soldier. “There are so few first-person, written at or near the time accounts from ‘average’ soldiers in the Revolutionary War. This new source opens up some rich possibilities.”

The diary, which features daily entries from March 28, 1781 to August 16, 1782, is one of three now known to have been kept by Weston during the latter years of the war. The other two were submitted by his widow in her Revolutionary War pension application and remain in the National Archives. The newly acquired diary appears to have been the one he kept when at home, while the other two record his journey to the army and his life as a soldier on campaign.

The never-before-displayed diary will be displayed as part of the Museum’s 2020 exhibit exploring the critical roles and contributions of women during the American Revolution and how they preceded the women’s rights movements that followed, in celebration of the 100th Anniversary of the passing of the 19th Amendment.