Diamond Eagle was Presented to Washington in Philadelphia in 1784

Display Will Complement the Museum’s Exhibition of a Recently Discovered Watercolor by Pierre L’Enfant, who Designed the Eagle

PHILADELPHIA, DEC. 6, 2017 — The Diamond Eagle — an exquisite jewel-encrusted medal owned and worn by George Washington — is now on display in Philadelphia for the first time since it was presented to Washington in this city 233 years ago. 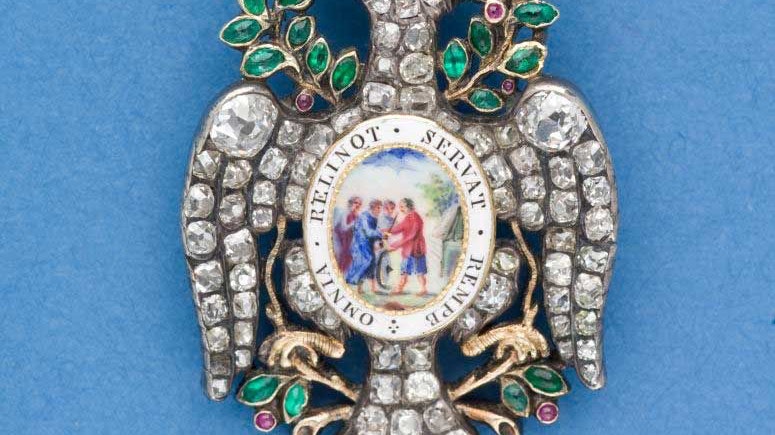 The Diamond Eagle is the badge of office of the president general of the Society of the Cincinnati, an organization founded by officers of the Continental Army at the end of the Revolutionary War to preserve the memory of the American Revolution for all time. Members of the Society wear a gold Eagle insignia.

The officers of the French Navy commissioned the Diamond Eagle — fashioned in gold and silver and embedded with nearly 200 diamonds, emeralds, and rubies — as a special tribute to Washington. It is on view at the Museum of the American Revolution from Dec. 6, 2017 through March 4, 2018, marking only the fourth time it has been publicly displayed in the United States.

The Diamond Eagle was presented to George Washington in May 1784 at Philadelphia’s City Tavern, just steps away from the Museum, during the first general meeting of the Society of the Cincinnati. The name “Cincinnati” was taken from the heroic Roman general Cincinnatus, who relinquished dictatorial powers after saving the Roman republic from invasion. The modern Society of the Cincinnati is the oldest patriotic organization in the United States and created the American Revolution Institute in Washington, D.C., to fulfill the historic mission assigned to the Society by George Washington and his fellow officers. The Diamond Eagle is the most prized possession of the Society.

The Museum has made extraordinary security provisions for the priceless Eagle, which is displayed in a specially designed, high-security case adjacent to the Washington’s War Tent theater, where Washington’s headquarters tent is dramatically presented.

“The Diamond Eagle epitomizes the idea of Washington as the ‘American Cincinnatus,’ the ultimate citizen-solider who put the good of the nation ahead of his own and returned his power back to the people,” said Michael C. Quinn, President and CEO of the Museum of the American Revolution. “It is fitting for us to present it alongside Washington’s War Tent, which signifies Washington’s selfless devotion to the cause of the Revolution and his tireless support of his soldiers. We couldn’t be more grateful to the Society of the Cincinnati for allowing us to present this precious artifact to the American public.”

Pierre Charles L’Enfant, a French-born military engineer who is most renowned as the master planner of Washington, D.C., served in the American Revolution and designed the Society’s insignia, basing it on the American Bald Eagle. In 1783, L’Enfant traveled to France to have the Eagle made by Parisian goldsmiths. Officers of the French Navy commissioned the Diamond Eagle, and L’Enfant carried it with him in 1784 on his return to Philadelphia and presented it to Washington on their behalf.

The display will coincide with the Museum’s exhibition of a recently acquired watercolor painting also by L’Enfant. The painting depicts the Continental Army’s encampment at Verplanck’s Point, New York, in 1782, and includes the only known wartime depiction of Washington’s War Tent. On display from Jan. 13 – Feb. 19 and entitled Among His Troops: Washington’s War Tent in a Newly Discovered Watercolor, the limited-run exhibit will bring together works of art, weapons, and other artifacts from the Revolutionary War to explore the history surrounding the remarkable recent discovery of this painting by the Museum’s curators.

The Diamond Eagle exhibit is included with regular museum admission. Museum tickets can be purchased here and are $19 for adults; $17 for seniors, students, and active or retired military; and $12 for children ages 6 and up. Children ages 5 and under are free. All tickets are valid for two consecutive days. Group tickets for parties of 15 or more are currently available for a reduced price by calling 267.858.3308. Memberships are also available for purchase here or by calling 215.454.2030.