PHILADELPHIA, April 17, 2017 —Taste the Revolution! Not only is the Museum of the American Revolution officially joining the landscape of Historic Philadelphia on April 19, but so is a brand new eatery: the Museum’s Cross Keys Café. Local restaurants and breweries are welcoming these new neighbors by creating everything from Hamilton-inspired entrées to a gelato flavor based on Martha Washington’s cake recipe and offering discounts to Museum ticket-holders. 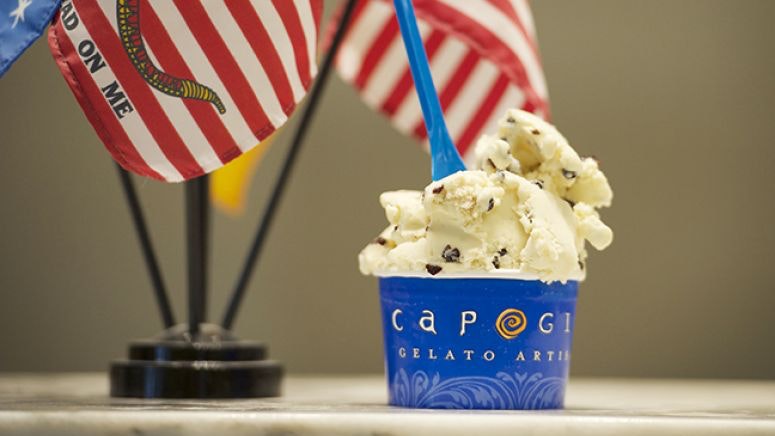 With an Alexander Hamilton-inspired name and colonial-era décor, The Little Lion restaurant is the perfect complement to its new neighbor. In honor of the Museum’s opening, the restaurant has added a new entrée to their menu – the “Hamilton Steak” special. The entrée, based on research on Hamilton’s favorite foods, will be marinated and grilled, served with pickled red onions and green tomatoes, along with an herbed butter compote. Proceeds from the entrée on April 19 will be donated to the Museum. The restaurant is also announcing new hours of operation to coincide with the Museum’s opening, beginning with a continental breakfast buffet from 8 a.m.-11 a.m. seven days a week.

Located directly across Chestnut Street from the Museum, Capofitto Pizzeria and Gelataria created a new Revolutionary-flavored gelato created especially for the Museum. The flavor is based on Martha Washington’s “Great Cake” recipe – it has a cream base with sherry, candied currants, orange and lemon zest. Capofitto unveiled the gelato to guests at the Museum’s 285th birthday celebration for George Washington in February. It will be available on a rotating basis at all Capogiro/Capofitto locations.

Operated by Chef Walter Staib, host and creator of the national television series “A Taste of History,” City Tavern is a grand restaurant originally opened in 1773 and was host to the first Fourth of July Celebration in 1777. Located just steps away from the Museum, City Tavern boasts three floors of dining, staff adorned in historically accurate attire, a large garden area and, of course, authentic 18th century Philadelphia fare. Offering the famous West Indies Pepperpot Soup served by Washington to his troops before the famous Delaware River crossing, Martha Washington’s Turkey Pot Pie, The Ales of the Revolution made by Yards Brewing, fresh bread and desserts baked daily and much more. In honor of the Museum, City Tavern will provide a complimentary toast of Madeira for diners with a ticket stub from the Museum. Madeira was enjoyed by our Founding Fathers and is the perfect way to end your meal at City Tavern. The restaurant is open for lunch and dinner daily starting at 11:30am. City Tavern’s Chef Staib also serves as a historical consultant to the Museum’s Brûlée Catering.

Shane Confectionery, the candy shop owned by the Berley Brothers, will offer several Revolution-inspired items in anticipation of the Museum’s opening:

The Franklin Fountain ice cream parlor and soda fountain, also owned by the Berley Brothers, is a living museum in its own right. The Franklin Fountain is selling single servings of pre-packaged ice cream in the Museum’s Cross Keys Cafe. Flavors include Washington Vanilla, Jefferson Chocolate and Creme de Lafayette (French Vanilla with Raspberry and Blueberry compote).

Old City brewery and restaurant 2nd Story Brewing Co. collaborated with Museum curator Mark Turdo, who has a wealth of knowledge about historic fermented beverages, to create Drinker’s Table Beer, featuring brown malt, flaked oats, and a portion of smoked malt in the grist. The historically-inspired beer is named after the Drinker family of Philadelphia who brewed table beer for themselves and their guests. Drinker’s Table Beer will be available at 2nd Story Brewing Co. beginning April 8.

Located across Chestnut Street from the Museum, Revolution Diner reopened to the public this month. The diner, now open from 7 a.m. – 11 p.m., features a Revolution-themed menu featuring items such as Revolution Wings, the Colonial B.L.T. Burger, and the Americano Burger with American cheese, pickles and onions all wrapped up in pizza dough. The recently renovated restaurant will offer 20 percent off to all Museum ticket-holders on April 19.

Art in the Age

The Art in the Age Tasting Room and Home Bar Supply in Old City is the workshop and testing ground for Quaker City Mercantile, and the only place to taste the company’s newest innovations. Art in the Age is a one-stop-shop for the home bartender. The shop stocks bar tools, mixers, bitters, and glassware. They also offer educational workshops, tastings, and home mixology training. Art in the Age will offer a 20 percent discount on any branded merchandise, including the George Washington mug that is a reproduction of the original that is housed at the Museum, for any Museum ticket-holders.