Museum of the American Revolution to Open April 19, 2017

Philadelphia, PA, June 16, 2016 — On April 19, 1775, a shot rang out across the North Bridge in Concord, Massachusetts, igniting the Revolutionary War and changing the course of history forever. Philadelphia’s new Museum of the American Revolution will bring to life the dramatic story of our nation’s founding when it officially opens on April 19, 2017, the anniversary of “the shot heard ‘round the world.”

The Museum also announced today that it has received a challenge grant of $10 million from Board Chairman H.F. (Gerry) Lenfest that will double the impact of new gifts made toward completing the $150 million campaign. Lenfest previously made a $40 million matching gift that has been fully matched. The Museum has currently raised $130 million from supporters across every state in the nation. 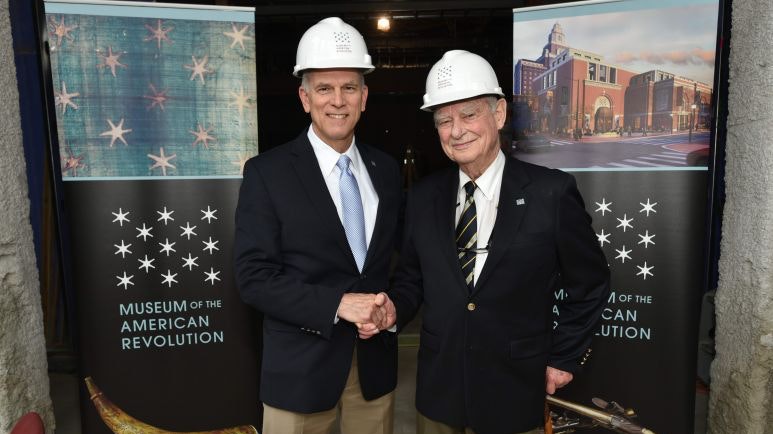 Michael Quinn (left), President and CEO of the Museum of the American Revolution, shakes hands with H.F. (Gerry) Lenfest, the founding chairman of the Museum. Kelly & Massa Photography

“Thanks to Gerry’s tremendous generosity, the Museum of the American Revolution will open on April 19, a date that marks the beginning of one of the most important and exciting stories in history,” said Michael Quinn, President and CEO of the Museum. “At last, this priceless collection of artifacts – a century in the making – will be available to the millions of people who come to Philadelphia from around the world to learn about America’s founding.”

“I am so grateful to those who have joined me in supporting this important cause,” Lenfest said. “The story of our nation’s founding and its enduring legacy must be understood, and there is no better place to experience that story than historic Philadelphia.”

Through the Museum’s expansive collection of Revolutionary-era weapons, personal items, documents, and works of art, visitors will experience the remarkable story of the American Revolution from its origins to ultimate victory and its continuing relevance. From General Washington’s Headquarters Tent—one of the most iconic surviving artifacts of the Revolution—to a soldier’s wooden canteen branded with “UStates” at a time when the phrase was merely an aspiration; and from British, French, Hessian, and American firearms to the first newspaper printing of the Declaration of Independence, the collection reflects the multiplicity of men and women whose struggle and sacrifice contributed to the founding of our nation.

The Museum will display a number of artifacts that witnessed the first fighting of the Revolutionary War on April 19, 1775. These include the gun carried by Captain David Brown, leader of a company of Concord minutemen, as he confronted a British force across the North Bridge, and a British musket a soldier of the 4th (King's Own) Regiment of Foot. Both are from the Museum of the American Revolution's collection. The Concord Museum, in Concord, Massachusetts, holding one of the nation’s most important collections of Revolutionary War materials, has loaned: an original timber from the North Bridge; a mirror from Captain David Brown's house that was damaged by a British soldier on April 19; and a powder horn and sword carried by men who stood with Captain Brown to confront the British troops at the bridge.

In addition to authentic artifacts, the Museum will use immersive galleries, dynamic theaters, and re-created environments to bring to life the events, people, and ideals of our nation’s founding. Immersive experiences include a full-scale replica of Boston’s Liberty Tree, where the first stirrings of revolt were discussed and debated; the Battlefield Theater, where visitors will experience the sensation of facing a British assault on the Continental Army’s front line; and a re-creation of Independence Hall when it was reduced to a prison for American soldiers during the British occupation of Philadelphia.

The Museum, which has been under construction since spring of 2014, now stands at Third and Chestnut Streets in the historic district of Philadelphia. The building encompasses 118,000 total square feet, including permanent and temporary exhibit galleries, theaters, education spaces, collection storage, a café, a Museum retail store, offices, and a welcoming lobby. The internationally recognized firm of Robert A.M. Stern Architects created a landmark design for the state-of-the-art facility in a style that reflects and honors the rich history of the neighborhood.