Museum of the American Revolution Names Theater in Honor of $8 Million Gift from Alan B. and Jill Miller

PHILADELPHIA, MARCH 15, 2018 — The Museum of the American Revolution today announced the naming of the Alan B. Miller Theater in honor of an $8 million gift from Museum Board Member Alan B. Miller, Chairman and CEO of Universal Health Services, Inc., and his wife Jill Miller. The Theater houses one of the most iconic surviving artifacts from the Revolutionary War, General George Washington’s War Tent. 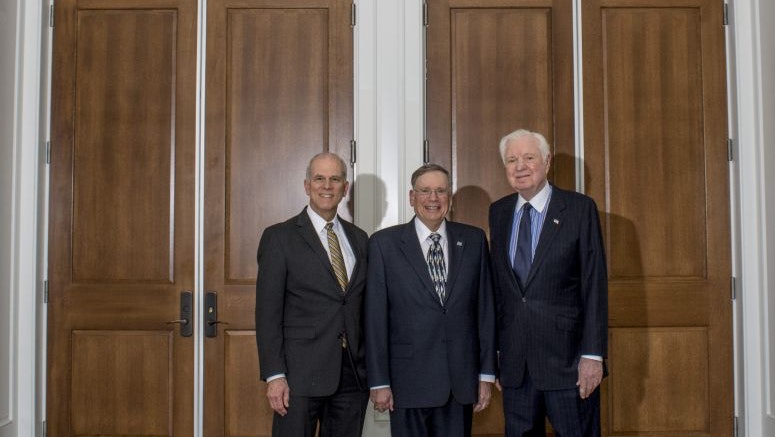 The new name was unveiled on Monday for more than 300 guests at a private event hosted by Universal Health Services, Inc. at the Museum.

“Washington’s War Tent is the heart and soul of this Museum and we couldn’t be more delighted to recognize Alan by naming the Tent’s state-of-the-art home in his honor,” said Michael Quinn, President and CEO of the Museum of the American Revolution. “The Tent has already survived several centuries as a witness to the establishment of our nation, and Alan and Jill’s incredible generosity will help ensure that it survives – and is celebrated – for many more.”

Washington’s War Tent is the cornerstone of the Museum’s unmatched collection of artifacts. The “rock-star object” (New York Times) is dramatically revealed as part of an innovative, multi-layered, mixed media theater presentation that has quickly become a signature visitor experience. The presentation has been called “engrossing, dramatic” (Washington Post) and “strikingly original” (New York Review of Books).

The Museum most recently won a 2018 Institutional Award for the presentation of Washington’s War Tent from PA Museums, Pennsylvania’s statewide museum association. The award will be presented at the Pennsylvania Military Museum on April 16, 2018. In October 2017, the Museum was awarded a 2017 Pennsylvania Historic Preservation Award in the category of Preservation Planning for the years-long process to conserve and display the tent.

“I’ve always been an admirer of George Washington,” said Alan B. Miller. “Washington exemplified the highest ideals of leadership in the Revolution—his unyielding determination, his resilience, his devotion to his soldiers, and his intuitive grasp of strategy and the core values of America are awe-inspiring. To be associated with the most important symbol of his leadership—the tent that was his headquarters—is a privilege. I’m delighted to be able to support the Museum in this way.”

The Museum announced in January that it had exceeded its founding campaign goal of $150 million by 10 percent, raising an extraordinary $165 million to build, open, and endow the Museum. This gift brings the capital campaign total to $173 million of which $48 million has been allocated to endowment. The Museum opened on time, under budget and with no debt in April 2017.

About Alan B. Miller

Alan B. Miller is Chairman and CEO of Universal Health Services, Inc. (UHS), which he founded in 1979. UHS, a Fortune 500 company, is one of the largest and most respected hospital management companies in the nation. It owns and operates more than 350 facilities in 37 states, Washington, D.C., Puerto Rico, and the United Kingdom. Miller also serves as Chairman of the Board, CEO and President of Universal Health Realty Income Trust, a real estate investment trust that currently has investments in 65 properties located in 20 states.

Miller has been named one of Modern Healthcare magazine’s “100 Most Influential People in Healthcare” every year since 2003. Fortune magazine recognized UHS as one of the “World's Most Admired Companies” in 2011 and 2016, and this year UHS was named to Forbes’ inaugural list of America’s Top 500 Public Companies. Miller has received the George Washington University President’s Medal, the Americanism Award from the Anti-Defamation League, and the Chairman’s Award from the United Negro College Fund, among other awards. The Juvenile Diabetes Research Foundation, an organization in which he was active for years, has also honored Miller.

Miller served on the executive board of the Wharton School of the University of Pennsylvania and is currently a member of The Board of Overseers. He is chairman emeritus of the Opera Company of Philadelphia and served as one of the founding directors of the Kimmel Center for the Performing Arts in Philadelphia.