PHILADELPHIA, JULY 6, 2017 — Just hours after the words of the Declaration of Independence were first read to the army in New York on July 9, 1776, a mob of soldiers and sailors descended on Bowling Green in Lower Manhattan and tore down the gilded statue of King George III that stood there. 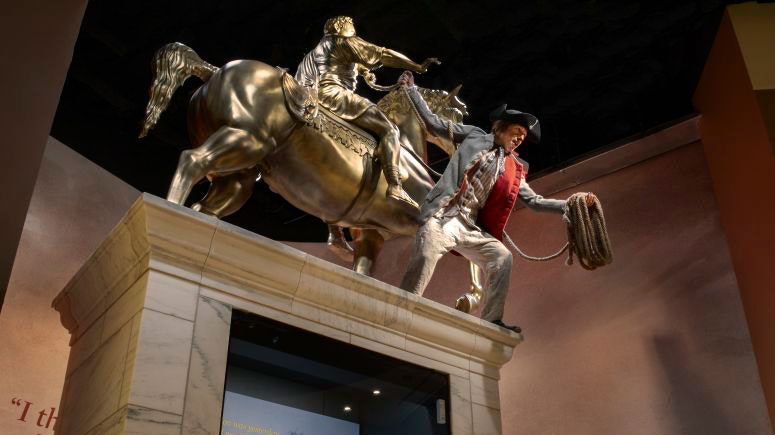 Pieces of the statue were later melted down into more than 42,000 musket balls – referred to as “melted majesty” by some – and used to fight the British during the Revolutionary War. One of those musket balls is now on display at the Museum of the American Revolution in time for the July 9 anniversary of the tearing down of the statue.

In 2015, nine musket balls that had been previously excavated at the site of the June 28, 1778 Battle of Monmouth in N.J., were found to have strong probabilities of being from the statue based on elemental analysis. The musket ball that is being loaned to the Museum was found back in 1990 by Daniel Sivilich, a battlefield archaeologist and president of BRAVO (Battlefield Restoration & Archaeological Volunteer Organization), who was metal-detecting across the street from Monmouth Battlefield State Park on then private property (now part of the state park). The other eight musket balls were later found within the park, as part of one of the earliest controlled battlefield excavations in the country.*

It wasn’t until 25 years later that the musket balls were tested using non-destructive X-ray fluorescence spectrometry (XRF) and compared to fragments of the statue that are in the collection of the New-York Historical Society (two of which are now on loan to the Museum of the American Revolution). The ball’s composition of lead and tin matches the combination of lead and tin found in the surviving pieces of the statue. This discovery is evidence that Revolutionary soldiers fired pieces of the statue back at the British. In October, Sivilich presented his and coauthor Michael Seibert's findings at the 2016 Fields of Conflict conference in Dublin, Ireland. 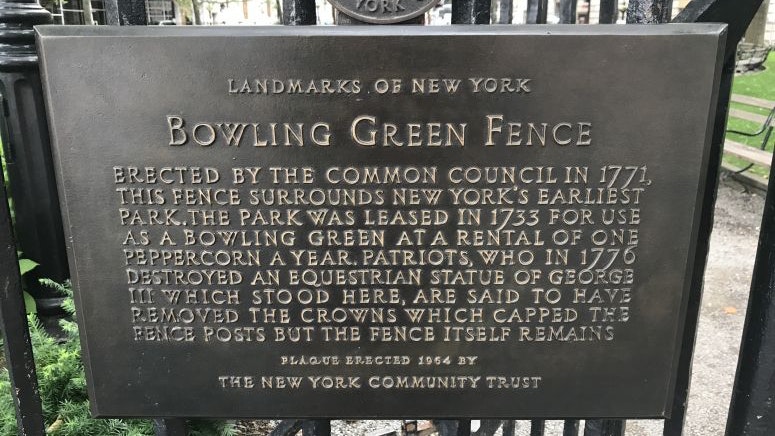 “Being able to display this musket ball really brings this story full circle, signifying the transformation from loyal subjects of a king to radical Revolutionaries,” said Dr. Philip Mead, Chief Historian and Director of Curatorial Affairs at the Museum. “From the protests that still take place there to the installation of the ‘Fearless Girl’ statue, it is interesting to see that Bowling Green is still a site for revolutionary statements as a people have continued to expand those ideals of liberty and equality.”

The musket ball is on display in a case that contains two fragments of the statue which are on loan from the New-York Historical Society, as well as tools like the ones used by the women of Litchfield, Conn., to melt pieces of the statue into musket balls. The case is embedded in an 8ft. marble pedestal, which holds a replica of the King George III statue. The replica was created by Brooklyn sculptural studio StudioEIS, and is the first to-scale replica of the statue ever made. A figure of a sailor is located next to the statue, throwing down a rope to visitors as if to say, “Would you join the Revolution?” 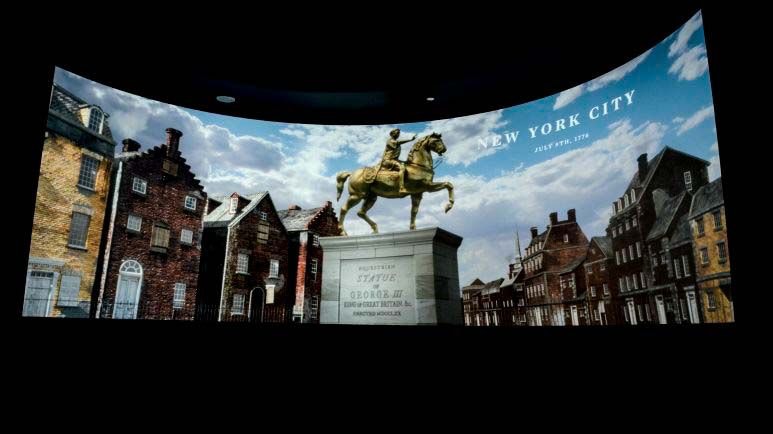 The Museum’s core exhibition experience begins with a short, immersive theater that puts visitors in the midst of the mob as the statue is being torn down. In the final theater experience of the galleries, visitors return to Bowling Green today – where the original fence still stands nearly 250 years later – and are shown that, where a statue of the King once stood, now are people pursuing life, liberty and happiness. It serves as a reminder that the Revolution replaced the King with the people as the final say in the seat of power.

On Saturday, July 8 and Sunday, July 9, the Museum will feature voting stations where visitors can ponder the question “Would I have joined the mob to pull down the statue of King George in 1776?” and cast their vote to see where they stand among others. At a Discovery Cart located in the lobby from 11 a.m. – 5 p.m., visitors will learn about bullet molds like those that were used to make musket balls from the melted statue.

In the Museum’s Patriots Gallery, kids of all ages can try their hand at drawing their own version of the statue, based on clues from eyewitness accounts. Family-friendly activities from 11 a.m. – 5 p.m. also include try-on Revolutionary clothing, cartridge-rolling and other activities related to supplying the army in Philadelphia.

*Monmouth Battlefield is a protected site and metal detecting or removal of artifacts is illegal.

Daniel M. Sivilich is a battlefield archaeologist with more than thirty years' experience in the field and over 40 years of experience using metal detectors. He is one of the founders of the concept of electronic battlefield archaeology and has developed many new methods, both in field techniques and data analysis. He has authored numerous scholarly and popular articles on Revolutionary War-era historical archaeology. Dan has a BS in Chemical Engineering and has applied those skills to conflict archaeology such as developing the Sivilich Formula used to calculate the original diameter of a non-spherical musket ball. He is the author on the definitive work Musket Ball and Small Shot Identification: A Guide. Sivilich recently made national and international news when he announced that a member of BRAVO found lead artillery shrapnel at Monmouth Battlefield that tested positive for human blood protein.