In keeping with the Museum’s mission, Museum Board Chairman H.F. (Gerry) Lenfest created the award to celebrate the importance of public knowledge of American history, especially history related to the creation, evolution, and preservation of the core ideas of American democracy that were established during American Revolution. The award carries a grant of $25,000, which Lenfest endowed with a gift of $500,000 to continue the award for years to come. 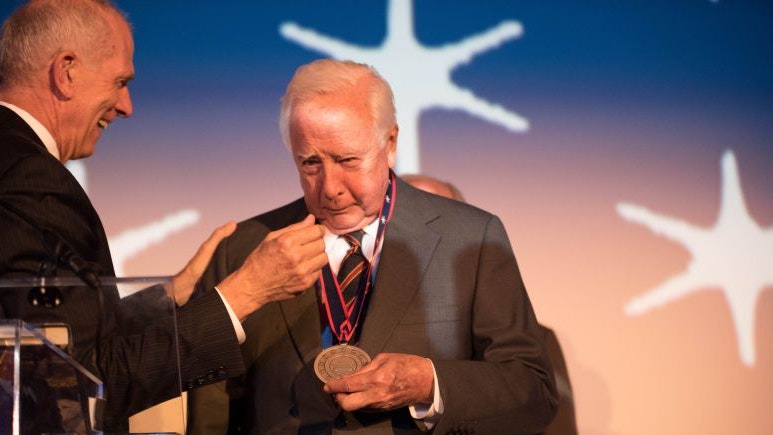 “David McCullough’s books have led a revival of interest in American history,” said Lenfest. “He has been a major force in keeping alive the bold spirit of the American Revolution and has given an entire generation a new appreciation of the great responsibility of liberty. In many ways, David has been an inspiration for me and my leadership of the Museum—to preserve and teach the lessons of our nation’s founding for future generations.”

McCullough is the author of 1776, John Adams, Truman, and other acclaimed historical works. He has been a stalwart supporter of the Museum and led the Museum’s first board of scholars.

Lenfest, along with fellow Museum board member David Acton (McCullough’s Yale University classmate and longtime friend), presented the award to McCullough as part of a celebration of Lenfest’s extraordinary ten years of service as Chairman of the Museum’s Board of Directors on Sept. 20.

The event was held in the new Museum building, which was dedicated to Lenfest and his wife Marguerite at a public event on Sept. 15. The Museum officially opens to the public on April 19, 2017. 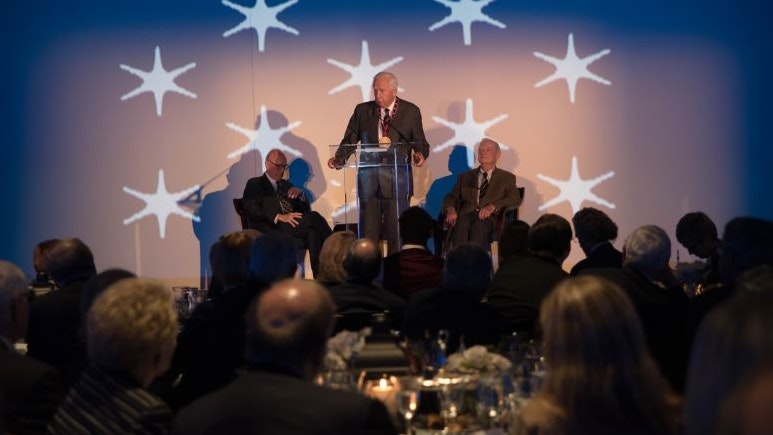 Acton (left) and Lenfest (right) were onstage as McCullough received the medal. ToussaintPhotography.com

Lenfest has served as Board Chairman since 2005 and has contributed $50 million in matching grants toward the Museum’s $150 million campaign. The Museum has now received over $141 million from supporters across every state in the nation.

“For more than a decade, Gerry has been a passionate advocate for this Museum because he believes in its mission to honor the legacy of this nation’s founding,” Michael Quinn, President and CEO of the Museum of the American Revolution. “He envisioned this award as a way to celebrate and encourage others to engage in similar work. His patriotic dedication to our nation and his generosity truly know no bounds.”

The Lenfest Award may be given to an individual or to an organization active in a broad range of fields such as history, education, film-making, writing, media, and philanthropy. The recipient’s work should be noteworthy for fostering public understanding of the historical origins, development, purposes, and principles of the American nation and the relevance of this history in the current civic life of the nation.

About David McCullough
Called “one of America’s greatest living writers” by the Washington Post, David McCullough has twice received the Pulitzer Prize, for Truman and John Adams, and twice received the National Book Award, for The Path Between the Seas and Mornings on Horseback. His other acclaimed books include The Greater Journey, 1776, Brave Companions, The Johnstown Flood, The Great Bridge, and The Wright Brothers. McCullough’s books have never gone out of print, and have been published in 19 languages. According to the citation accompanying his honorary degree from Yale, “As an historian, he paints with words, giving us pictures of the American people that live, breathe, and above all, confront the fundamental issues of courage, achievement, and moral character.” He is the recipient of numerous honors and awards, including more than 50 honorary degrees and the Presidential Medal of Freedom, the nation’s highest civilian award. In 2013, in his honor, the city of Pittsburgh, his hometown, renamed its landmark 16th Street Bridge over the Allegheny River the David McCullough Bridge. For more information, visit www.DavidMcCullough.com.