Washington’s Tent is the Centerpiece of the Museum’s Collection

PHILADELPHIA, Jan. 31, 2017 — One of the most iconic surviving artifacts from the Revolutionary War, the field tent used as General George Washington’s wartime headquarters was installed in its new state-of-the-art home at the Museum of the American Revolution after a years-long process to conserve and display it.

The tent will be featured as part of an innovative, multi-layered, mixed media presentation in a dedicated 100-seat theater. When the Museum opens to the public on April 19, the theater show will be a signature visitor experience. 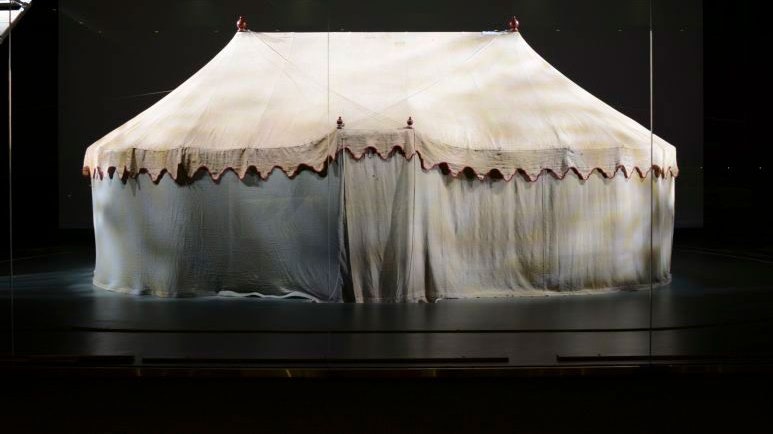 Called “the heart and soul of the [Museum’s] collection, as it was for the Continental Army” by Smithsonian.com, Washington’s Headquarters Tent served as his office and sleeping quarters throughout much of the Revolutionary War. From within the canvas walls, Washington strategized, wrote dispatches, and made key decisions that would change the course of history.

“Washington’s tent was his command center during the Revolutionary War, and tells the story of his inspiring leadership, unyielding determination, and steadfast devotion to his troops,” said Michael Quinn, President and CEO of the Museum of the American Revolution. “It is a powerful symbol of American freedom, and one that we are thrilled to be able to preserve for future generations.”

Created for use as a mobile field headquarters during the Revolutionary War, the tent likely was made in Reading, Pennsylvania in early 1778, while Washington was encamped at Valley Forge. It was used by George Washington from 1778 – 1783, and witnessed many dramatic moments during the War of Independence, including the 1781 Siege of Yorktown, the last major battle of the war. The tent was last displayed several decades ago at Valley Forge National Historical Park.

“The process to conserve and display this three-dimensional textile was one of the most complex and complicated preservation projects in generations, involving structural engineers, historians, tailors, conservationists, curators and others over the course of several years,” said Dr. R. Scott Stephenson, Vice President of Collections, Exhibitions, and Programming for the Museum of the American Revolution. “The tent has already survived several centuries as a witness to the establishment of our nation, and these efforts will ensure that it survives – and is appropriately celebrated – for many more.”

One of the challenges of displaying the tent was to make it appear as if it were pitched in the field without putting tension on it. To design a system that would support the artifact without inducing stress in the centuries-old fabric, Keast & Hood structural engineers designed an innovative umbrella-like aluminum and fabric structure to display the artifact in a lifelike fashion.

In order to test the support structure for the tent, the Museum enlisted a team of tradespeople from Colonial Williamsburg to create an exact replica of the tent to be used as a “stunt double.” The replica also is used for interpretive programming and educational outreach, and has appeared at historic sites including George Washington’s Mount Vernon, Colonial Williamsburg, Anderson House, and Tudor Place, among others.

The tent is the cornerstone of the Museum’s collection of approximately 3,000 Revolutionary-era artifacts. In 1909, the tent was acquired by an Episcopal priest in Valley Forge, Reverend Herbert Burk, who dreamed of creating a museum to tell the story of our nation's founding. Burk purchased the tent, which had been put up for sale by Mary Custis Lee, a descendant of Martha Washington. He raised the $5,000 purchase price from hundreds of ordinary Americans. The acquisition began a century of collecting – a collection which eventually came under the ownership of the Museum of the American Revolution.

For a full FAQ about the tent, click here.

The Museum of the American Revolution, which opens in the heart of historic Philadelphia on April 19, 2017, will explore the dynamic story of the American Revolution using its rich collection of Revolutionary-era weapons, personal items, letters, diaries, and works of art. Immersive galleries, theaters experiences, and recreated historical environments will bring to life the events, people, and ideals of our nation’s founding and engage people in the history and continuing relevance of the American Revolution. Located just steps away from Independence Hall, Carpenters’ Hall, and Franklin Court, the Museum will serve as a portal to the region’s many Revolutionary sites, sparking interest, providing context, and encouraging exploration. The Museum is a private, non-profit, and non-partisan organization. For more information, visit www.AmRevMuseum.org or call 877.740.1776.