Just in time for the Fourth of July, the Museum of the American Revolution has installed a rare 1776 broadside printing of the Declaration of Independence, on loan from California resident Holly Metcalf Kinyon, a descendant of Declaration signer John Witherspoon. The printing hasn’t been publicly displayed in more than a century and has never been displayed in a museum. 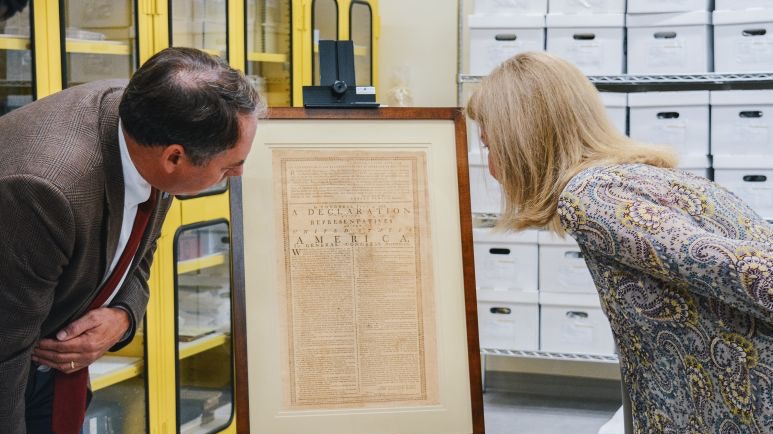 The printing is now on display at the Museum, just two blocks from Independence Hall, where the revolutionary document was debated and adopted. It will remain on display through the end of the year.

The broadside was printed by newspaper publisher and printer John Holt in New York in 1776, shortly after the adoption of the Declaration in Philadelphia. It is one of only five of Holt’s printings that are known to have survived.

The printing is addressed to Col. David Mulford (1722-1778), a Revolutionary War colonel who died of smallpox in 1778, to whom it had originally belonged. It remained a treasured possession of an unbroken line of Mulford’s direct descendants for 241 years. The printing was last displayed in the late 1800s in the home of Col. Mulford’s great-grandson Robert L. Mulford (1821-1899) in Mt. Vernon, New York. It was sold to Kinyon at auction in 2017 by a member of the Mulford family who has chosen to remain anonymous.

“The Mulford family’s deep appreciation for history enabled me to connect with my American heritage in a profound way,” said Kinyon. “Women played a vital role in preserving this printing of the Declaration and it’s my privilege to see it displayed publicly again by the Museum of the American Revolution.”

This broadside printing is especially unique because it opens with the first printed announcement of New York’s official support of the Declaration (the New York delegates had abstained from voting in Philadelphia; the New York Provincial Congress voted on July 9 to “join with the other colonies in supporting” independence).

On the reverse side of the printing, a handwritten note reads: “S[…]ampton July 24: 1776 | Coll. Mulford Sir | as the within Closed Letters are an Express | I made Bold to Open & Read them | I am Sr Your Humble Servt: | Uriah Rogers | [flourish].” Uriah Rogers (1737-1814) served as Major in Mulford’s regiment during the Revolution and delivered the printing to him on horseback.

“We are honored to be able to share this extraordinary treasure of the American founding with our visitors this summer,” said Dr. R. Scott Stephenson, Museum President and CEO. “It is humbling to stand in the presence of such an authentic witness to our nation’s birth.”

The printing is displayed in a cylindrical case in the Museum’s Declaration of Independence Gallery. The gallery also explores what the Declaration’s promise of “equality” meant for all people, including women, enslaved people, and laboring men. In an adjacent mini-theater that evokes the inside of Independence Hall, a film explores the tumultuous weeks leading up to the adoption of the Declaration. Through a touchscreen installation, visitors learn about the 88 local declarations of support for independence that preceded the one issued by the Continental Congress.

From Saturday, June 29 – Sunday, July 7, 2019, the Museum is hosting a weeklong Independence Day Celebration. Visitors can add a personalized ribbon to a giant flag-shaped installation on the Museum’s outdoor plaza to declare how they will #BeTheRevolution. Inside the Museum, visitors can explore the history and continuing legacy of the Declaration with a display featuring snippets from declarations of independence from around the world, revealing the global influence of the American Declaration. More information is available here.