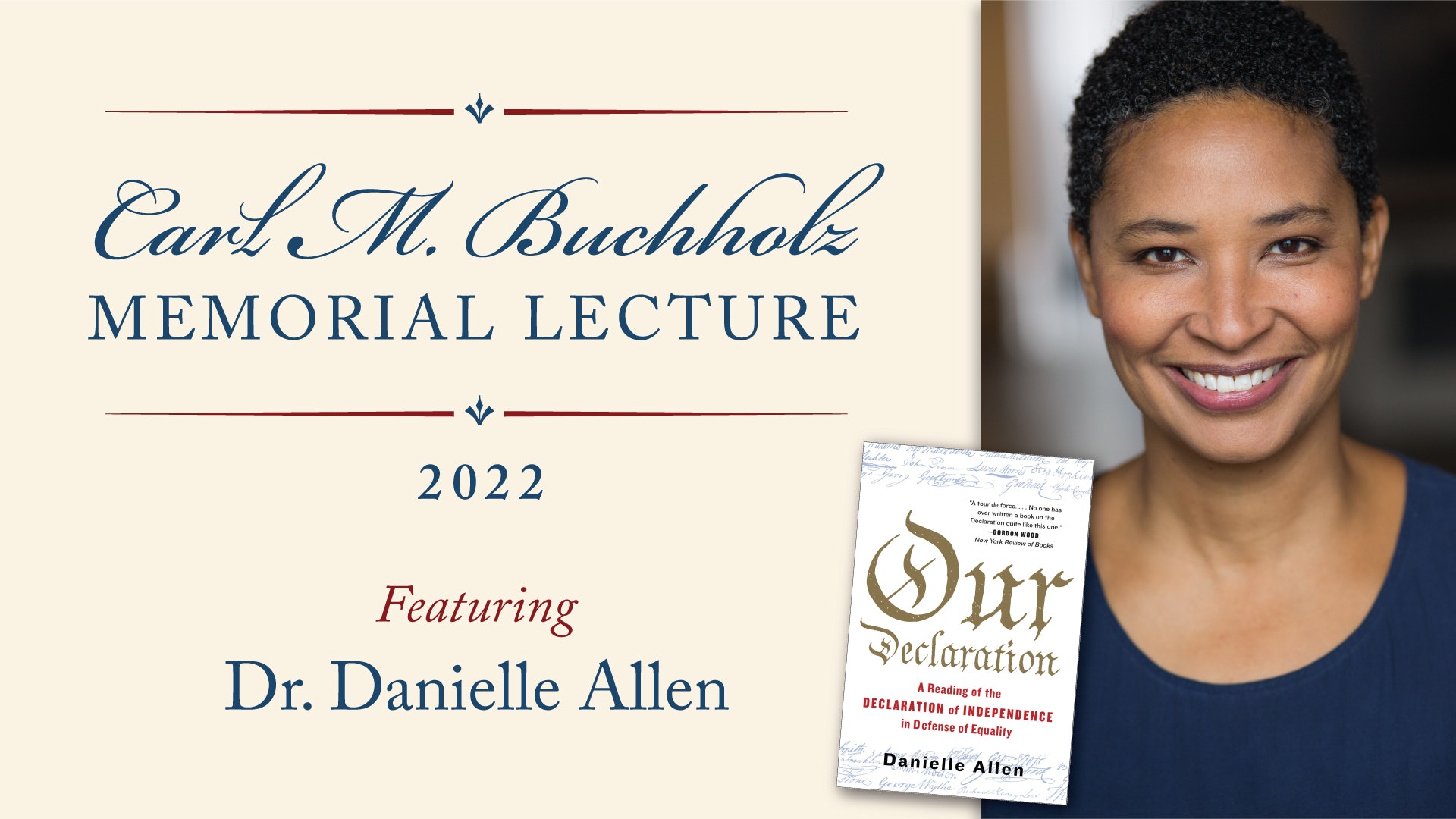 Political theorist and author Dr. Danielle Allen, James Bryant Conant University Professor at Harvard University, will join the Museum of the American Revolution as the distinguished lecturer for the fourth annual Carl M. Buchholz Memorial Lecture on Thursday, Jan. 27, 2022, from 6 – 7 p.m. Her talk will focus on her groundbreaking book Our Declaration: A Reading of the Declaration of Independence in Defense of Equality.

Harvard University’s Dr. Jane Kamensky, who serves on the Museum’s Board of Directors, and Museum President and CEO Dr. R. Scott Stephenson will provide introductory remarks.

The hybrid event will take place in the Museum’s Liberty Hall and will be livestreamed for ticketed online viewers. Proof of vaccination is required for the onsite event. Tickets are now available for purchase, beginning at $30, online or by calling 215.253.6731. All onsite tickets include a signed copy of Our Declaration. Proceeds from the event support the Museum’s educational programs. EDITOR'S NOTE: General admission tickets to this event will now be online-only and are Pay What You Wish.

“A tour de force.... No one has ever written a book on the Declaration quite like this one.” ―Gordon Wood, New York Review of Books

Inspired by her work in justice and citizenship—and troubled by the fact that so few Americans actually know what the Declaration of Independence says—Allen set out to explore the arguments of the Declaration, reading it with both adult night students and University of Chicago undergraduates. Keenly aware that the Declaration is riddled with contradictions, Allen and her students nonetheless came to see that the Declaration makes a coherent and riveting argument about equality. They found not a historical text that required memorization, but an animating force that could and did transform the course of their everyday lives. With its cogent analysis and passionate advocacy, Our Declaration thrillingly affirms the continuing relevance of America’s founding text, ultimately revealing what democracy actually means and what it asks of us. Our Declaration was awarded the Heartland Prize, the Zócalo Book Prize, and the Society of American Historians’ Francis Parkman Prize, among others.

“An astounding new book that should reinvigorate public understanding of the founding document of the United States… Reading Ms. Allen makes reading the Declaration meaningful and enjoyable―a powerful enough lesson it its own right.” ―Sarah J. Purcell, Pittsburgh Post-Gazette

The event marks the fourth annual event in the Carl M. Buchholz Memorial Lecture Series, a series established by the generosity of the family, friends, and colleagues of the late Carl Buchholz, former vice-chairman of the Museum’s Board of Directors. The series was created to honor his public service and to explore the American Revolution and its relevance today.

About Danielle Allen
Danielle Allen, James Bryant Conant University Professor at Harvard University, is a political theorist who has published broadly in democratic theory, political sociology, and the history of political thought. She is the recipient of the 2020 John W. Kluge Prize for Achievement in the Study of Humanity, an award administered by the Library of Congress that recognizes work in disciplines not covered by the Nobel Prizes. Widely known for her work on justice and citizenship in both ancient Athens and modern America, Allen is the author of The World of Prometheus: The Politics of Punishing in Democratic Athens (2000), Talking to Strangers: Anxieties of Citizenship since Brown vs. the Board of Education (2004), Why Plato Wrote (2010), Our Declaration: A Reading of the Declaration of Independence in Defense of Equality (2014), Education and Equality (2016), and Cuz: The Life and Times of Michael A. (2017). She is the co-editor of the award-winning Education, Justice, and Democracy (2013, with Rob Reich) and From Voice to Influence: Understanding Citizenship in the Digital Age (2015, with Jennifer Light). In her latest book, Democracy in the Time of Coronavirus (University of Chicago Press, 2021), Allen untangles the U.S. government’s COVID-19 victories and failures to offer a plan for creating a more resilient democratic polity—one that can better respond to both the present pandemic and future crises.

Allen is a past Chair of the Mellon Foundation Board and the Pulitzer Prize Board, as well as a member of the American Academy of Arts and Sciences and the American Philosophical Society. She is a co-Chair of the Commission on the Practice of Democratic Citizenship, formed to explore how best to respond to the weaknesses and vulnerabilities in political and civic life.