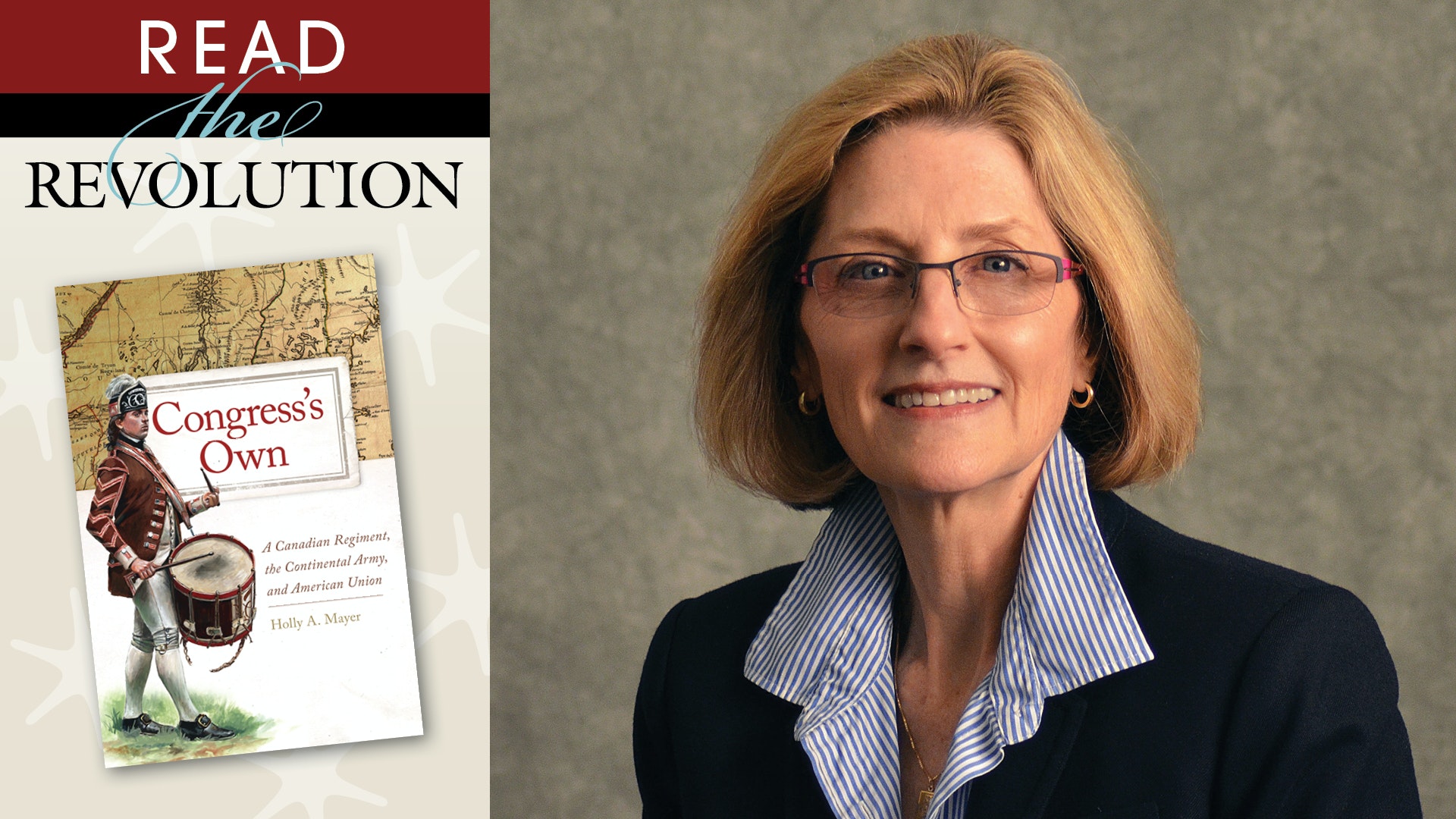 Author, professor, and historian of early America Dr. Holly A. Mayer will kick off the Museum of the American Revolution’s 2021-2022 season of the Read the Revolution Speaker Series on Thursday, September 30, 2021, at 6:30 p.m. Mayer will join the Museum to discuss her recently released book Congress’s Own: A Canadian Regiment, the Continental Army, and American Union. The ticketed event will take place onsite in the Museum’s Liberty Hall and will be available via livestream online.

Created by the Continental Congress as one of the first “national” regiments in 1776, Colonel Moses Hazen's 2nd Canadian Regiment, ​nicknamed “Congress's Own,” ​drew members from Canada, 11 American states, and foreign forces. Interweaving insights from borderlands and community studies with military history, Mayer will discuss how this culturally, ethnically, and regionally diverse regiment’s story is a reflection of the union that was struggling to create a nation.

Mayer will explore the regiment’s story as it shifts back and forth from the soldiers’ tents and trenches to the statesmen’s halls of power, offering vivid accounts of the Revolution that reveal how “Congress’s Own” regiment embodied the aspirations, diversity, and divisions within and between the Continental Army, Congress, and the emergent union of states during the War for American Independence. Following the talk, Museum President & CEO Dr. R. Scott Stephenson will host a live Q&A with the onsite and online audiences.

Guests who purchase onsite tickets can arrive at 6 p.m. to see a featured artifact on display in Liberty Hall and enjoy light refreshments at a cash bar and a chance to purchase the featured book signed by the author. This Read the Revolution event will also be streamed live via Zoom Webinar.

The featured artifact presented with thanks to the Historical Society of Pennsylvania will be a wartime journal kept by Sergeant Major John H. Hawkins, who served with “Congress’s Own” and whose story inspired Mayer’s research. Guests can see this journal on view for one night only during this special program. Members of the Historical Society of Pennsylvania receive a special discount to register for this event.

Tickets are $20 for general admission onsite, and $15 for Zoom Webinar-Only access. Member tickets are $15 onsite and $10 for Zoom-Webinar Only access. Tickets can be purchased here.

“By far one of the most important and original studies of the Continental Army yet published, Holly Mayer’s book is notable for how deeply and broadly it explores the Canadian borderlands context that gave birth to Congress’s Own Regiment, as well as the meanings of community, independence, and union for which Continental soldiers fought and died.”—David L. Preston, author of Braddock’s Defeat: The Battle of the Monongahela and the Road to Revolution

The next Read the Revolution Speaker Series event will feature New York Times bestseller and Pulitzer Prize-winning author Dr. Gordon S. Wood discussing his forthcoming book, Power and Liberty: Constitutionalism in the American Revolution, on Tuesday, October 26, 2021. Looking ahead, Harvard University political theorist and award-winning author Danielle Allen will join the Museum on Thursday, January 27, 2022, to discuss her groundbreaking book Our Declaration: A Reading of the Declaration of Independence in Defense of Equality as the Museum’s 2022 Carl M. Buchholz Memorial Lecturer.

The Museum’s Revolution Society Members receive complimentary access to Read the Revolution Speaker Series events and invitations to an exclusive online event series to read and discuss select historical documents that inspire our favorite book titles. Learn more about Read the Revolution Founding Footnotes by contacting Bridget Hovell, Manager of Leadership Giving at the Museum of the American Revolution by phone at (267) 579-3364 or by email at bhovell@amrevmuseum.org.

About Dr. Holly A. Mayer
Dr. Holly A. Mayer is Professor Emerita of History at Duquesne University in Pittsburgh and currently serves as the 2021-2022 Charles Boal Ewing Chair in Military History at the United States Military Academy, West Point. In 2016-2017, she was the Harold K. Johnson Chair of Military History at the U.S. Army War College. Her interest in the social, cultural, and military histories of late 18th-century North America inform her latest book, Congress’s Own: A Canadian Regiment, the Continental Army, and American Union (University of Oklahoma Press, 2021), as well as her earlier book, Belonging to the Army: Camp Followers and Community during the American Revolution (University of South Carolina Press, 1996). In addition to authoring various journal and anthology essays, Mayer was co-editor (with David E. Shi) of For the Record: A Documentary History of America (W.W. Norton & Company, multiple editions). She is currently wrapping up work as editor of the anthology Women Waging War in the American Revolution, which is under contract with the University of Virginia Press.