General George Washington's War Tent witnessed many important periods in American history — from it fabrication in the 18th century to its current installation at the Museum of the American Revolution. This is the third in a three-part series describing the tent's fate during the Civil War. Miss the first two parts? Read Part 1 and Part 2. 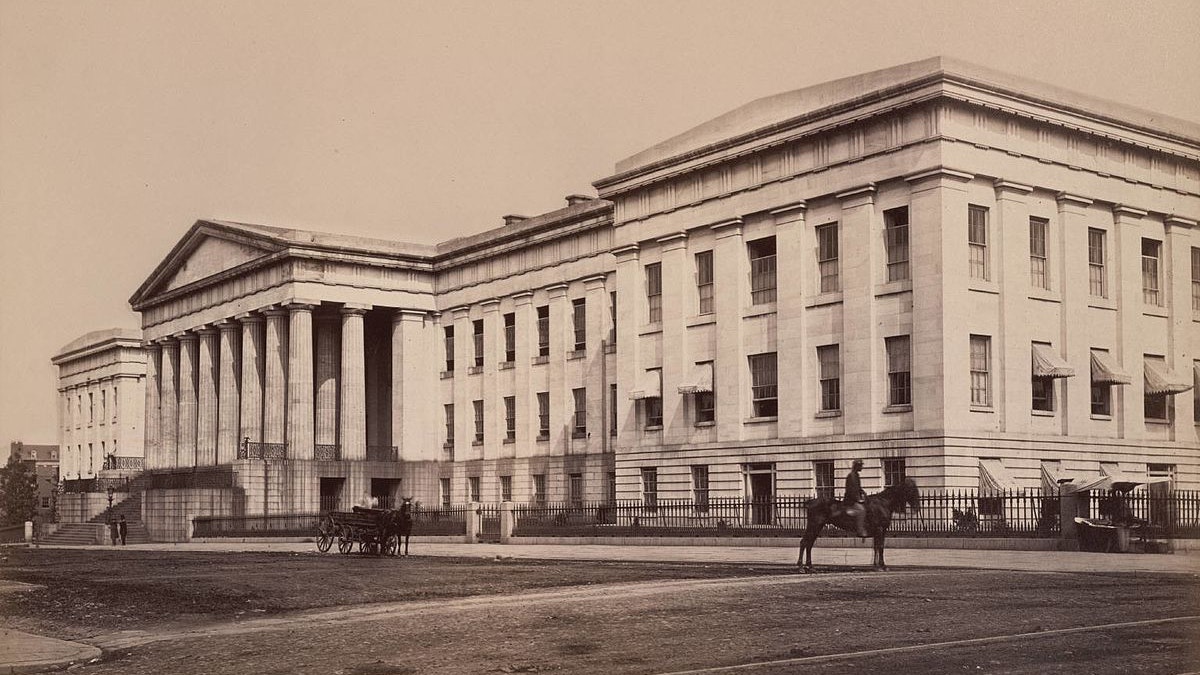 “Major General McClellan has placed the Washington relics discovered at Arlington House by Hon. Caleb Lyons of Lyonsdale under Mr. L’s charge and they have been arranged with exquisite taste and are attracting crowds of visitors to the Patent Office. They are en masse the only purely authentic souvenirs of the greatest man in modern times, and too great care cannot be taken in their preservation. — The National Republican, Washington, D.C., January 25, 1862

The Washington artifacts — including George Washington’s marquees — were put on temporary display for the general public within two weeks of their removal from Arlington House and arrival at the U.S. Patent Office Building in January 1862. Caleb Lyon, a former member of Congress and a pre-war guest of the Custis-Lee family at Arlington House, arranged an exhibit called Captured at Arlington. Lyon supervised the packing and shipment of the marquees, then (most likely working from memory) laid them out along with tent poles, tent pegs, ropes, and two leather portmanteaux (large bags used to carry bedding and other possessions) in the public exhibition hall at the Patent Office.

The Patent Office Building was one of the largest structures in Washington D.C. Encompassing an entire city block, its construction began in 1836 and continued until 1868. Part museum, part storage facility, and part government office building, by 1862 the Patent Office was also used as a barracks, hospital and morgue for Union Army soldiers. When the makeshift Patent Office hospital reached capacity, the wounded were lined alongside the display cases in the exhibition halls — including those that contained the Washington relics.

Before going on display, the marquees and all of their parts were inventoried and assigned five-digit identification numbers. The wooden poles, tent pegs, and rope slides had their numbers stamped into the wood, while those on the canvas walls and roofs were handwritten in black ink. These “Patent Office Numbers” are still visible on the objects today and are the main source for identifying them and verifying their authenticity.

The marquees would remain at the Patent Office for almost two decades — though we have yet to determine whether they were on display or locked in storage. In 1881, not long after a fire damaged the Patent Office, they were transferred to the Smithsonian Institution for safekeeping. Before being packed away, they were erected and photographed.

The marquees remained in storage due to legal wrangling over their ownership. When the Civil War ended in 1865, the Lee family petitioned the federal government for the return of Arlington House and the Washington relics — including the marquees — that had been confiscated by the United States government. This legal battle went all the way to the United States Supreme Court and took nearly forty years to settle.