By Susan Holloway Scott, Guest Contributor to the Fashioning Eliza project. The bestselling author of more than fifty historical novels, including I, ELIZA HAMILTON (Kensington Books). She can also be found on Instagram, Facebook, Twitter, and her website. 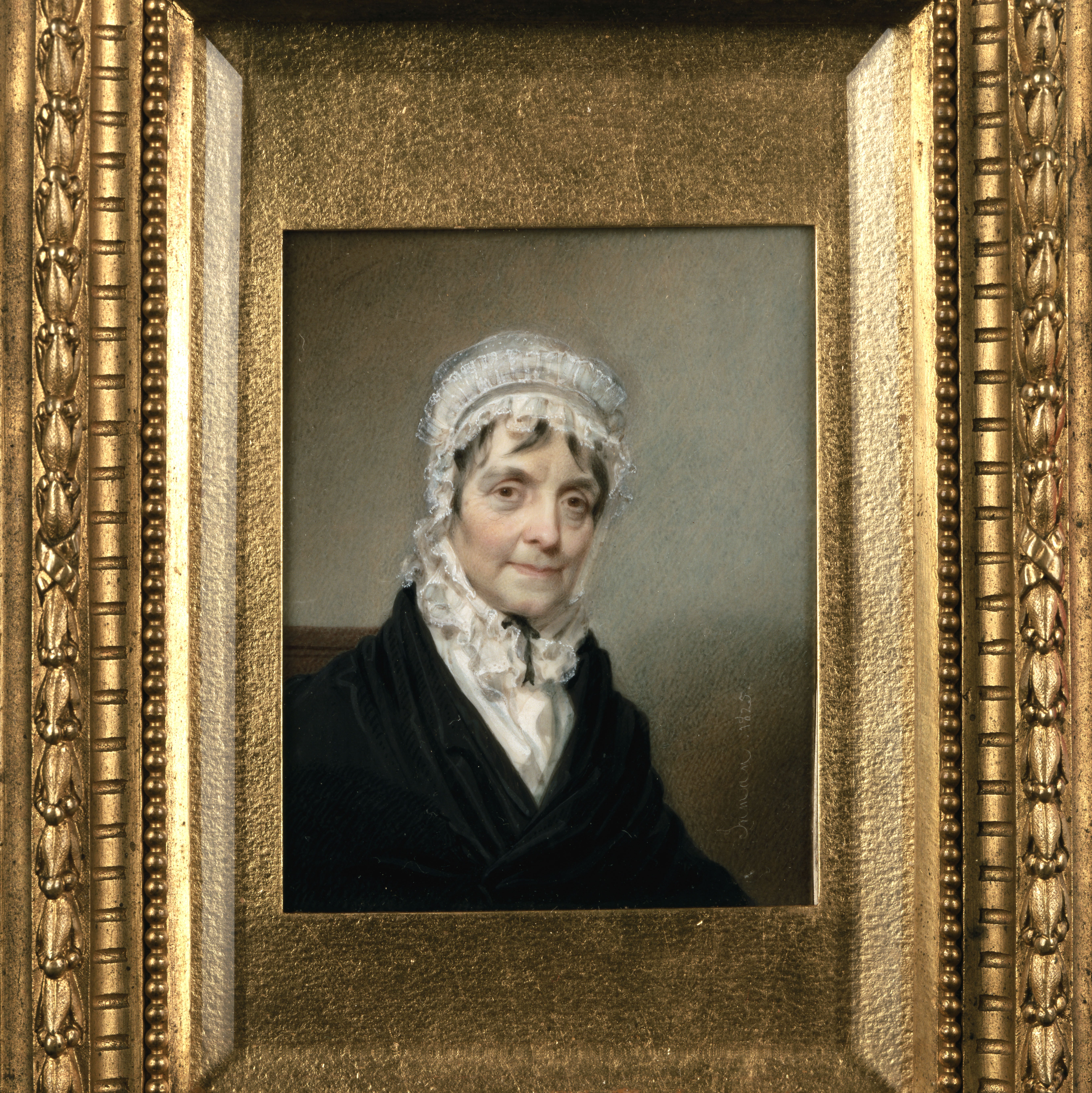 Like most women, Elizabeth Schuyler Hamilton wore a wide variety of fashionable clothing over the course of her long life. Although none of her actual garments are known to survive, her sense of personal style can be seen in her portraits and in contemporary descriptions of her, and in the Fashioning Eliza project here at the Museum.

The first dress to be recreated for the program showed what a young Eliza might have worn to a ball in 1777: a French-inspired polonaise in shades of blue silk taffeta. The second Fashioning Eliza dress was the white silk gown with a pink sash that Eliza – by then Mrs. Alexander Hamilton, wife to one of the rising stars of the early American government – wore to sit for her portrait by painter Ralph Earl in 1787.

In a 1790s portrait by James Sharples, Eliza is shown in a white muslin dress with a raised waist in the classical style, and with strands of beads or pearls and a gauze scarf looped stylishly through her hair. It’s clear that Eliza continued to keep up with the latest fashion trends from abroad even though her husband had retired from politics.

But in July 1804, Alexander Hamilton died following his duel with Aaron Burr. Overwhelmed with grief, Eliza Hamilton at once adopted the black mourning dress expected of widows. She never remarried, and she never wore color again for the remaining fifty years of her life. Nor did her mourning evolve with changing fashions. Even in the 1840s, when most other women dressed in full, bell-shaped skirts, she still kept the same straight, high-waisted black gown with a white ruff and cap that had been in style in 1804.

In a miniature portrait of Eliza by Henry Inman from around 1825 – recently on display as part of the Year of Hamilton – she is shown dressed like this. Twenty-five years later, in her final portrait by Daniel Huntington, her clothing is nearly identical. A later memoir described her in her nineties:

Her dress, always black, of wool in the morning and of silk or satin in the evening…Around her neck was a broad, finely plaited ruffle fastened behind, and…her face, with its fine features, was framed by a plain snowy cap edged with a plaited ruffle, and tied under the chin…. 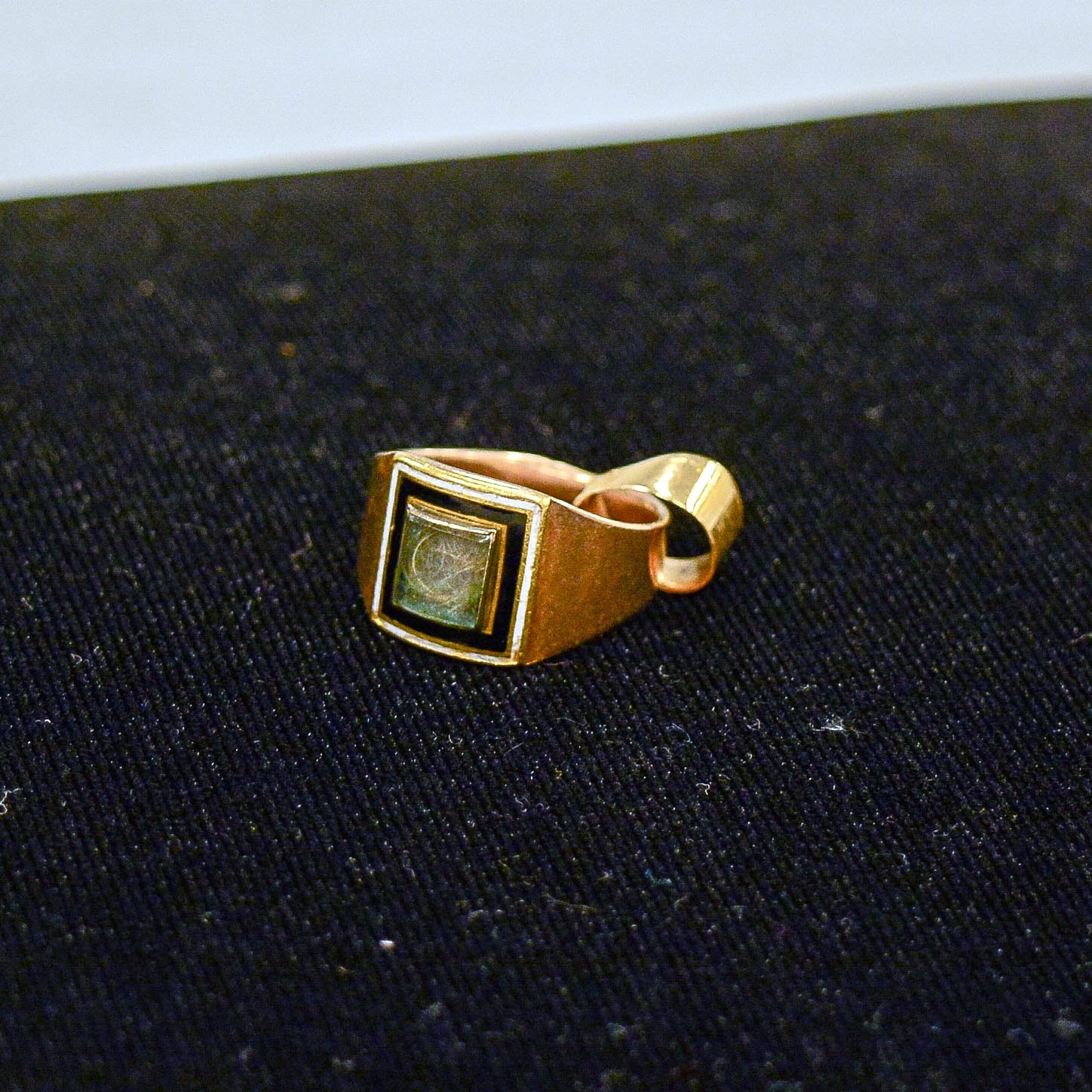 On loan from Doug Hamilton

It’s believed that she also wore a heavy gold mourning ring that held a small lock of her husband’s hair. The ring is engraved with the dates of his birth and death, and that she wore it not on her finger, but likely on a chain or ribbon around her neck. This ring is also currently on display in the Year of Hamilton exhibition case.

Yet Eliza wasn’t only honoring and remembering her husband with her mourning attire. She wanted everyone else to remember Hamilton and his legacy, too, as well as the tragic, violent circumstances of his death. Her small, black-clad figure became a powerful symbol that was impossible to ignore. Wherever she went, she herself served as a poignant reminder of her husband, and she was often described in the press along with various eulogies’ and orations. Among these memorials was the one delivered in Boston by Harrison Gray Otis, published as a pamphlet now on display as part of the Year of Hamilton.

One such scene was described in an Albany newspaper in the summer of 1804, soon after Hamilton’s funeral. While Eliza attended church with her children, her youngest son fainted, and was carried out while she hurried after him. An observer noted it all for the newspapers, including the popular judgment of Aaron Burr:

While the little son was supported standing on the steps, yet speechless, the most affecting scene presented itself….The mother, in this tender situation, fastened herself upon the son, with her head reclining on his left shoulder – the agonies so strongly painted on her countenance – her long flowing weeds – the majesty of her person – their trying situation in the recent loss of a husband and a father – who could refrain from invoking on the head of the guilty author of their miseries, those curses he so rightly merits…the curse of being held to the view of future ages – a MONSTER, and an ASSASSIN.

William Coleman, ed., A Collection of the Facts and Documents, relative to the Death of Major-General Alexander Hamilton; with Comments: Together with the various Orations, Sermons, and Eulogies, that have been Published or Written on his Life and Character, New York, 1804.

As distraught as Eliza must have been, she also understood. The emotional power of black mourning to symbolize loss and sorrow doesn’t come any stronger than that.