Fashioning Eliza in 1787: A White Silk Dress for a Special Portrait 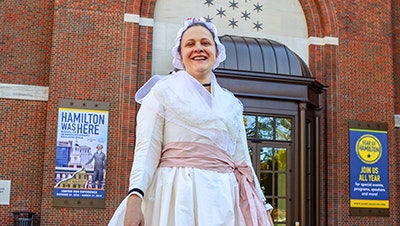 By Susan Holloway Scott, Guest Contributor to Fashioning Eliza and author of I, ELIZA HAMILTON. She is half of the popular history blog Two Nerdy History Girls, and can also be found on Instagram, Facebook, and her website.

Sitting for a portrait was serious business in 18th-century America. Professional artists were few and portraits were expensive, a luxury for only the wealthiest or most prominent of people. Even for them, a portrait was often a once-in-a-lifetime event.

When Elizabeth Schuyler Hamilton sat for her portrait in the winter of 1787, she was thirty years old. From a socially prominent New York family, Eliza was the wife of Colonel Alexander Hamilton, an up-and-coming young lawyer and Revolutionary War hero who was already playing an important role in shaping the new country’s government. Alexander himself had already sat for several portraits, and now it was Eliza’s turn.

The white silk gown that Eliza wears is the first to be recreated by historical mantua-maker and gown designer Samantha McCarty as part of the Fashioning Eliza program for the Museum’s “Year of Hamilton” celebration.

It’s the perfect choice, too. Eliza would have put a great deal of thought into what she chose to wear for this portrait. She was creating a lasting image of herself, a “selfie” for posterity. Her dress is stylish and appropriate for her status coming from a wealthy family and as Mrs. Alexander Hamilton, with costly imported silk and lace that displayed her husband’s success. Her dark hair is frizzled and powdered white in a style made popular by Queen Marie Antoinette of France – a nod not only to French royal fashion, but also to the country that had helped America win its Revolution.

But Eliza pointedly wears only thin black ribbons tied around her wrists and throat instead of jewels or other ornaments. Simplicity in dress – and this dress is without any extra ruffles or fussiness – was praised and considered patriotic. With Eliza’s body shaped by stays (her corset), it’s easy to overlook the fact that she’s pregnant in this portrait, and that she would give birth to the third Hamilton son, James Alexander, in the spring of 1788. Her white silk gown is the color of purity, truth, and virtue, excellent qualities for a woman of the new republic, and for the mother of new citizens as well.

Eliza may also have chosen a white gown for another reason, since this portrait resulted from an unusual act of charity by the Hamiltons. Alexander knew that the American-born portraitist Ralph Earl was imprisoned for debt in the New York city gaol. By the paradoxical laws of the time, the artist wouldn’t be released until he’d paid his debts – impossible for him to do as long as he was imprisoned.

Alexander arranged for Earl to be given fresh paints, brushes, and canvas, and he also commissioned this portrait of his wife. Happy to help the impoverished artist, Eliza sat for Earl in a room in the gaol, her pristine white gown setting her apart from the sordid conditions nearby. Other New York ladies followed her example, and the artist was finally able to pay his debts and resume his career.

There’s only one other portrait of Eliza from her marriage, a pastel by James Sharples drawn around 1795. In this, too, she is shown wearing white. The choice of color is probably only a fashionable coincidence, and yet the two white dresses in these portraits stand out in comparison to what was to come. When Alexander died in 1804 of wounds following his fatal duel with Aaron Burr, Eliza immediately began dressing in black for mourning. In the fifty years of her widowhood, she never wore anything else.