Over Winter Break, we were lucky enough to welcome seamstress Samantha McCarty to the Museum to work on recreating a gown like Elizabeth Schuyler would have worn in 1777, as part of our Fashioning Eliza: 1777-1787 project. Using 18th-century techniques, McCarty fit – and began constructing – a gown inspired by Paul Tazewell’s costume design for the Broadway smash hit Hamilton: An American Musical for Museum educator Meg to wear. Read more about McCarty's design process for the Eliza 1777 in our last Fashioning Eliza update. Support for the Fashioning Eliza project is provided in part by David and Kim Adler. 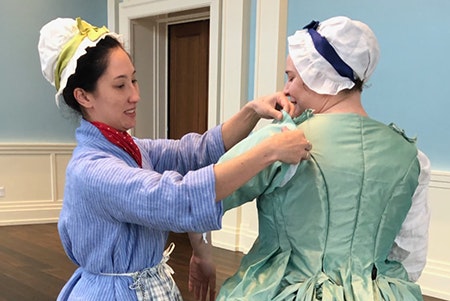 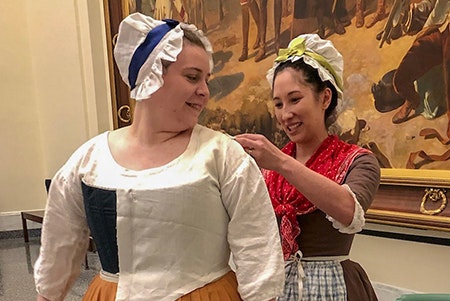 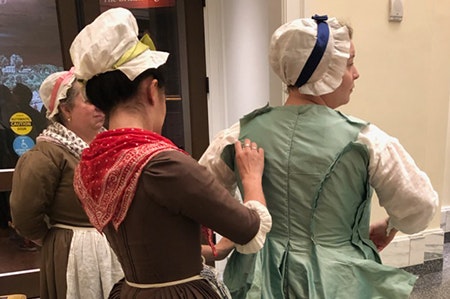 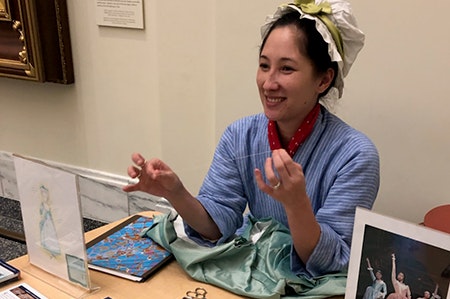 The Eliza 1777 dress will make its debut on Tuesday, Jan. 22, 2019 fittingly, at History After Hours: A Winter’s Ball. Can you upstage Eliza on her big night out? Get ready to fill up your dance card!

What would Eliza have worn when she first met Alexander Hamilton? McCarty will discuss 18th-century fashion and how people dress for social success at the time.

See if your feet are fancy in 18th-century dances with Susan Braisted and Niel DeMarino, who in 2005 co-founded In Good Company, a troupe founded with the idea to reinterpret the country dances with historically accurate "stepping" and incorporate notated period minuets and other figured dances. Watch and learn from the experts, then put your best foot forward and practice your moves.

Test your knowledge of our ten-dollar Founding Father at the debut of our new trivia game, The Quizzing glass, in the Cross Keys Café. Happy hour drink, including specialty wine cocktails, and food specials will be available throughout the Alexander Hamilton-themed trivia.

The Room Where It Happened

See if you can master the subtle art of dress, deportment, and politics, as if you were visiting Martha Washington in Revolutionary Philadelphia.

Learn about Ona Judge, an enslaved woman in the Washington’s home, who would have helped Martha get ready for formal events.

Can’t get enough Hamilton? The Museum Shop will be open throughout the evening for unique gifts for any Hamilton fan in your life. Plus, spread the warmth by dropping off a new or gently used coat to donate to One Warm Coat.

Next Post: When Alexander Met Eliza... Or At Least Danced With Her