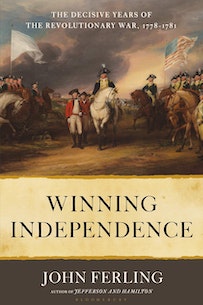 Winning Independence: The Decisive Years of the Revolutionary War, 1778-1781 by John Ferling

Many times when we think of the key moments of the American Revolution we overlook the latter half of the war. John Ferling is here to change that. Focusing on the later southern campaigns in Virginia, North Carolina, South Carolina, and Georgia, Ferling’s narrative history in his new book, Winning Independence: The Decisive Years of the Revolutionary War, 1778-1781, considers how rival commanders George Washington and Sir Henry Clinton faced challenges and setbacks at a time when American independence was far from certain.

Ferling begins Chapter 9, titled “Risk-Taking Becomes the Order of the Day,” with a study of General Nathanael Greene, who found himself sent to new territory to fight Great Britain’s pivot to a “southern strategy.” New to the South and trying to manage a network of local sources and unruly militia, Greene relied on people with special expertise, including Polish civil engineer Thaddeus Kościuszko, whose knowledge of terrain and surveying would help Greene plan his defense against the British approach.

Learn more about one of Poland’s most famous national heroes, Thaddeus Kościuszko, his contributions to the American Revolution, and his influence right here in Philadelphia. See Content

Before departing New Jersey, General Greene had begun to consider his options in fighting Lord Cornwallis, but he knew it was too early to make final plans. At that juncture, and for the next several weeks, Greene did not know whether Cornwallis had been reinforced after King's Mountain. Nor did Greene know the whereabouts of his adversary. Besides, Greene wanted to assess his own army and its officers before laying his plans. Befitting a former quartermaster general, logistics were uppermost on Greene's mind. To assure that supplies from the northern states that passed through Virginia reached his army, he issued orders for the exploration of the Roanoke, Dan, and Yadkin Rivers to determine whether they were practicable for waterborne transportation. He also directed General Steuben to secure the region around Portsmouth in order to inhibit British incursions into Virginia, a directive that was rendered meaningless when Benedict Arnold soon thereafter occupied that site with a powerful force.

Greene was a whirlwind of activity during his first weeks in North Carolina. Even during his journey to Charlotte, Greene had carefully reconnoitered the landscape, keeping a watchful eye on the rivers he crossed, observing fords, ferries, and other possible crossings. Noting that river upon river coursed through North Carolina, he laid the groundwork for successfully traversing those streams in the event that someday he was faced with having to make a hurried retreat. Unlike Gates, who had imprudently hurried into action, Greene spent weeks making preparations for taking the field. Working with Colonel Thaddeus Kosciuszko, the professional military engineer, Greene set about searching for the bateaux that would be needed for transporting supplies and making river crossings. He appealed to the state assembly to provide him with ample wagons, artisans to keep them running, and teamsters to drive them. He saw to the fabrication of more than twenty strategically located magazines and ordered that a three-day supply of milled grain be stored here and there in patriot-owned gristmills. He undertook "great Alterations” within the quartermaster corps and sought to persuade North Carolina to reform its supply system so that one official "of known Probity” would be vested with "full and ample Powers to call forth the supplies.” Operating on the dictum that "Great events often depend on little things," he advised the state's Board of War to establish additional storehouses for arms and other provisions, gather and "stall-feed" large herds of cattle, and "salt down as much pork," as possible. He was horrified to discover that many militiamen raised both by Virginia and North Carolina during September's emergency had never been sent home, with the result that their foraging had "laid waste almost all the Country.” He knew that he would have to have militiamen, but he wanted them mustered only when the enemy threatened "immediate ravages" or he was about to take the field. From the outset, he took steps to synchronize his army's actions with those of partisan bands, a step with which Gates had scarcely troubled. Greene had hardly unpacked his bags before he contacted Francis Marion and Thomas Sumter. Among other things, he let them know that they were to be a principal source of his intelligence, the "Eyes" of his army, as he put it. Without their help, he would be "groping in the dark,” he said. But he also told them that this war could be won only by the army. Partisan sallies were akin to "the garnish of a table.” They would play vital roles in softening up the adversary though only the army could vanquish the enemy.

Greene received encouraging word from Virginia during December. It had resolved to raise the three thousand continentals needed to meet its troop quota and by mid-month four hundred of those men were already on the march to join him in North Carolina. In addition, Steuben was sending down 1,500 muskets and bayonets, another 2,000 firearms were coming from farther north, and wagons and artillery horses were on the way as well. Greene needed everything. Long before arriving in the South, he had been advised that the army was in deplorable condition, and he immediately found those reports to be all too accurate. His army was "weak,” "half starved,” “without tents and camp equipage,” and in a "wretched Condition,” he said. He told Governor Thomas Sim Lee of Maryland that if the southern army was not strengthened, North Carolina would fall under Britain's thumb, a turn of events that would be "fatal to you" and the potential soldiers languishing at home.

Greene had never previously been in the South, but he was aware of the problems that two of his predecessors, Robert Howe and Benjamin Lincoln, had experienced with southern authorities. Greene resolved not be over­bearing in his approaches to the officials. "To effect an entire reformation of the plan and politicks of this Country would be a greater task than that attempted by Martin Luther in the Romish Church,” he allowed. Contrary to what some in the North had concluded, Greene soon found that south­erners had "Spirit and Enterprize;' but they "must go to war in their own way or not at all." In their impatience to drive the British from their states, he learned, southerners at times demanded hasty action, and it led him to think it was perhaps what had caused Gates to act too quickly. "Prudence and Caution;' Greene vowed, were to be his watchwords.

Gates had used something of a sledgehammer approach when seeking assistance from the governors of Virginia and North Carolina. Greene sought to reason with them, but behind his velvet-glove manner lurked a menacing threat. If the army was not properly supplied, he told Abner Nash, the army it would have no choice but to "take what is necessary.” For the most part, however, Greene chose his words carefully. The quickest way to ensure the loss of discipline within an army, he advised the governors, was to sow anguish among the soldiery by not adequately feeding and clothing them. He wrote Jefferson that the "Life of a Soldier in its best State is subject to innumerable Hardships;' but when ill provisioned the soldier's lot become "intolerable.” No man faced with unbearable conditions, he continued, "will think himself bound to fight the Battles" dictated by negligent or indifferent leaders.

Following his arrival in North Carolina, Greene found that Cornwallis was in Winnsboro, South Carolina, to which he had retreated following the debacle at King's Mountain. Situated some twenty-five miles northwest of Camden, and midway between the Wateree and Broad Rivers, it was ideally situated for assisting his two main interior posts, Camden and Ninety Six. The region below it was firmly in British control and abounded with all the foodstuffs his army would need. Cornwallis acknowledged, "We live well here,” beyond even his "most sanguine expectations.” But he had not gotten soft. All along, Cornwallis had planned to remain in Winnsboro only until General Alexander Leslie arrived to reinforce him, and that force did not disembark in Charleston until mid-December, more than two weeks after Greene reached Charlotte.

While Cornwallis awaited Leslie and Greene readied his army, both generals grappled with their strategic choices. Cornwallis remained convinced that if he focused on South Carolina, conditions in that province were certain to remain irredeemably bleak. He held unwaveringly to the belief that suppressing the rebellion in South Carolina hinged on sealing shut the rebels' supply lines and destroying Greene's army, and both objec­tives could be achieved only by returning to North Carolina. Success was not assured. Permanent closure of the supply lines would depend almost entirely on what Cornwallis called "the exertions of our friends in that prov­ince," a reference to Britain's ongoing reliance on an army of occupation consisting of Loyalist militia. Cornwallis's army would clear out the rebels, after which Tory militiamen would occupy and defend the conquered territory and the areas through which the supply lines ran. The role they were to play was so vital that Cornwallis, contradicting his earlier remarks, stated that Britain's "only chance of putting a favorable end to this war,” depended on the activism and exemplary service of the Loyalists. Given his experiences in South Carolina, Cornwallis was skeptical of the Loyalists' grit, privately labeling them "dastardly and pusillanimous," but he saw going into North Carolina and hoping for the most from the Tories as the best of the lamentable choices facing him.

Bringing Greene to battle was Cornwallis's second objective, and marching into North Carolina offered the best hope of getting the latest rebel commander onto a battlefield. Given the outcome at Camden, Cornwallis had to assume that Greene would stand and fight only if the rebel army possessed an overwhelming numerical superiority. Otherwise, Greene would run as Washington had run during the New York campaign in 1776. Nevertheless, Cornwallis could hope. Greene, an inexperienced commander, might blunder. His rebel army might also be caught in an ines­capable trap while seeking to cross one of North Carolina's many rivers or between two of those rivers. Or, given that he was an unseasoned commander, Greene, might opt to stand and fight, as had Lincoln at Charleston. Time after time in this war the British had been victorious, or come within a whisker of scoring a colossal triumph, when they got the rebels onto a battlefield. In Canada and on Long Island, in Savannah, Charleston, and Camden, the rebels had gone down, and given another hour of precious daylight at Brandywine, Howe might have destroyed Washington's army; at Monmouth, Clinton had thrown a scare into the rebel army while utilizing only a fraction of his redcoats. If Cornwallis could get Greene on a battlefield, he was confident of victory. 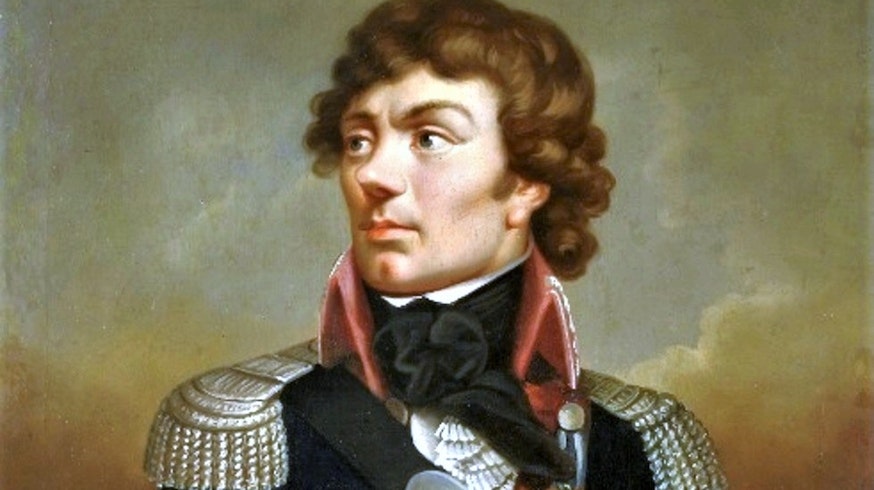 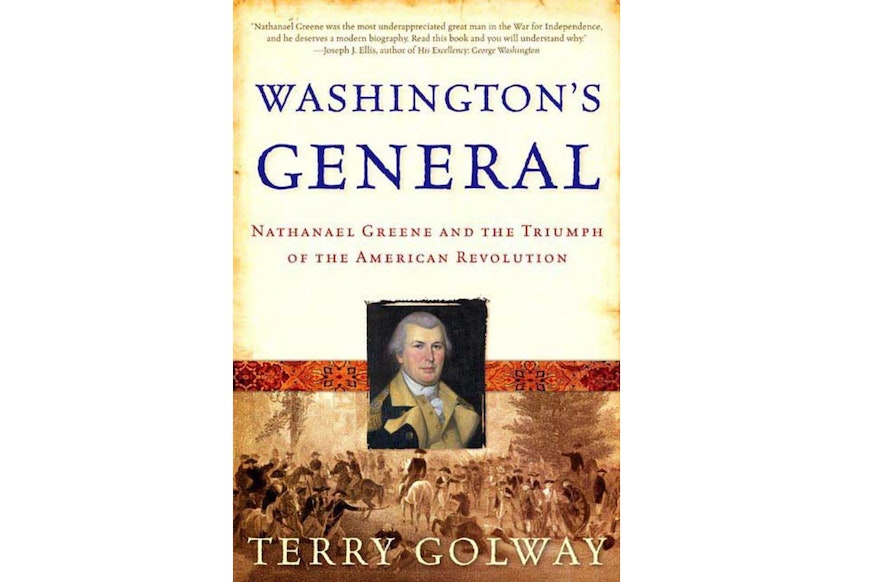 Read an excerpt from Terry Golway's biography of Nathanael Greene, who was appointed by Washington as commander of the Southern Army.
Read More 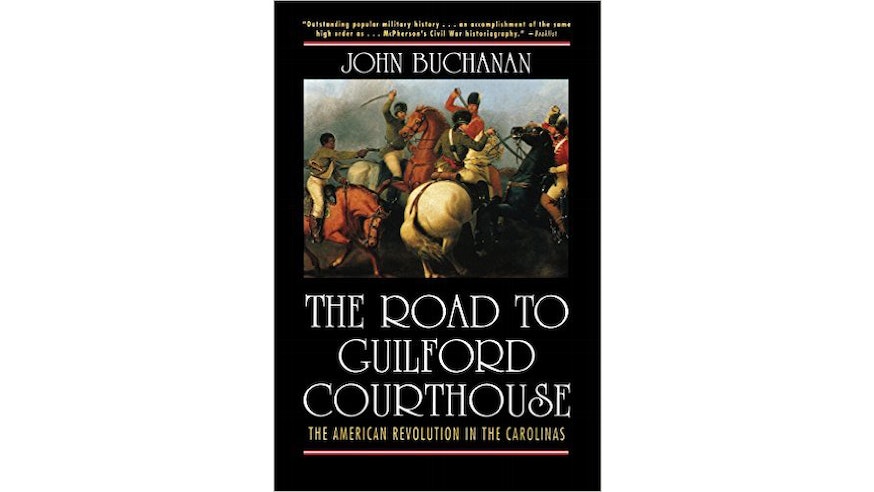 The Road to Guilford Courthouse

This excerpt from John Buchanan examines not only the battlefield strategy made in the Carolinas, but also the military careers of the major characters
Read More