The Road to Guilford Courthouse 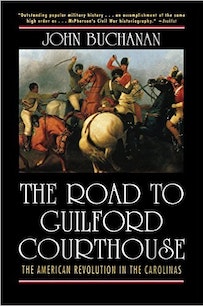 The Road to Guilford Courthouse: The American Revolution in the Carolinas by John Buchanan

The Road to Guilford Courthouse: The American Revolution in the Carolinas opens with the 1776 Battle of Sullivan’s Island where Patriot forces successfully defended the Charleston Harbor and concludes with the British victory at the Battle of Guilford Courthouse in 1781. While these two events bookend this military history, the meat of the work is a battle-by-battle march through the skirmishes and battles of the Southern Campaign, culminating at Guilford Courthouse. The author, John Buchanan, examines not only the battlefield strategy and tactical decisions made in the Carolina back country, but also the personalities and military careers of the major characters of Daniel Morgan, Nathanael Greene, Francis Marion, Sir Henry Clinton, Lord Cornwallis, and Banastre Tarleton.

The following excerpt sets the stage for the Battle of Guilford Courthouse on March 15, 1781. While the British won the battle, they suffered heavy losses and interrupted supply lines in the aftermath prompting their departure from the Carolinas towards Virginia and Yorktown.

On the day of Guilford Courthouse Nathanael Greene had about 4,440 troops. Of these some 1,762 were Continentals.

William Richardson Davie, who was at the battle, recalled many years later, that about half of the militia were behind the fence, a ‘cover too insignificant to inspire confidence.’ The militia were on either side of the road, just before it disappeared into the tangled forest behind them. Greene had four six-pounders and about 100 artillerymen under Captain Anthony Singleton. He posted Singleton and two of the guns on the road between the militia regiments.

Three hundred to 350 yards behind the first line, also astride the road but out of sight in the thick woods, was the Virginia militia brigade, one regiment of about 600 men commanded by Brigadier General Robert Lawson, the other also numbering about 600 under Brigadier General Edward Stevens. There were many discharged Continentals in the ranks. Still mortified by the behavior of his Virginians at Camden, Stevens stationed forty picked riflemen twenty paces behind the brigade. Their orders were to shoot any man who ran. 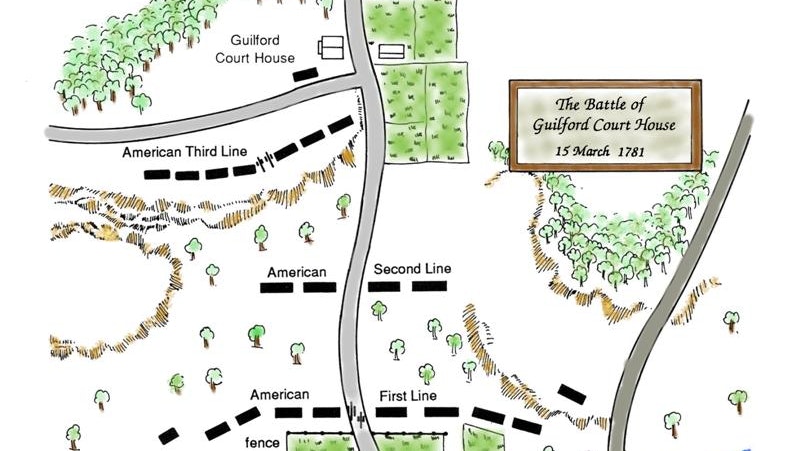 The main line of resistance was about 550 yards to the right and rear of the second line, in the clearing where the courthouse commanded the large boot-shaped field. Here waited slightly over 1,400 Continentals from Virginia, Maryland, and Delaware. The Virginia Brigade commanded by Brigadier General Isaac Huger included the 4th and 5th Regiments under, respectively, Lieutenant Colonel John Green and Lieutenant Colonel Samuel Hawes. The Maryland Brigade was commanded by Colonel Otho Holland Williams. Colonel John Gunby led the 1st Maryland, which also included Captain Peter Jacquett's Delaware Company, and Lieutenant Colonel Benjamin Ford commanded the 2nd Maryland. Colonel Gunby was wounded during the fighting and replaced by his deputy, the cool, intrepid Lieutenant Colonel John Eager Howard. The other two six-pounders, under Captain Samuel Finley, were placed between the Virginia and Maryland fronts. Of these units, only the 1st Maryland and the Delaware companies were hardened veterans, equal to any regiment Cornwallis could throw at them. Recruits composed most of the 2nd Maryland, and the two Virginia regiments had been raised to replace those lost at Charleston the previous year and had seen little if any action.

About 1:30 P.M. on 15 March 1781, the head of the British column appeared on the New Garden Road and with measured tread and to the beat of drums and sounds of fifes and Highland pipes marched across the brook and spread in both directions on the edge of the cleared area. Captain Anthony Singleton of the Continental artillery started the battle with his two six-pounders, and Lieutenant John McLeod of the Royal Artillery rushed three six-pounders forward and answered. While the gunners dueled, apparently without doing much damage, Cornwallis deployed. He had on the field about 1,950 men to oppose Greene's 4,440, but he did not know how many men Greene had. He thought 10,000 Americans faced him, but that did not deter him. He was ignorant of the terrain too, for he had not paid attention to it when last there, and his Tory guides were unable to provide an adequate description. That too did not deter him. Except for what he could see in the distance across the old corn field, he also lacked intelligence on Greene's dispositions. Nor did that deter him. What he had been seeking since January, had marched hundreds of miles for, had driven his army to rags and hunger to effect, was finally at hand. The reason Lord Cornwallis was a soldier lay before him, and he did not hesitate.

To the left of the road he placed the Royal Welsh Fusiliers and to their left the 33rd Foot. This wing was led by Lieutenant Colonel James Webster. Behind them in support were the 2nd Guards Battalion, the Grenadier and light infantry companies of the Guards, and the Jagers, all commanded by Brigadier General Charles O'Hara. To the right of the road were the 2nd Battalion of Fraser's Highlanders under Lieutenant Colonel Duncan McPherson. To its right was the blue-coated Hessian Regiment von Bose commanded by Lieutenant Colonel Johann Christian du Puy. In support was Lieutenant Colonel Norton's 1st Guards Battalion. Major General Alexander Leslie was in overall command of the right wing. Lieutenant McLeod's artillery was on the road between the two wings. In reserve in column on the road was Banastre Tarleton and the British Legion Horse. There were no Tory auxiliaries. Officers and men had been on short cations since late January. They had not been given breakfast and they had marched twelve miles that day while the Americans ate their breakfast and rested. They were outnumbered over two to one. If they lost they had nowhere to retreat, no one to come to their aid. But every unit was regular, every man a veteran, every soldier a product of iron discipline. It being the dying time, their officers from cornets to generals were all with them. When Lord Cornwallis gave the order to advance they too did not hesitate.

To the beat of drums and the wail of pipes and the sucking sounds of feet tramping through the muddy corn field, the tattered regiments under faded colors went forward. Four hundred yards away behind the split-rail fence William Montgomery watched them come and waited with his militia comrades for the order to fire.

Map: By User: Richard Harvey (self, using CorelPaint) [CC BY 2.5], via Wikimedia Commons

Have you already read this book? Here are some related titles to check out: