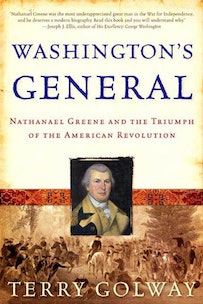 Washington's General: Nathanael Greene and the Triumph of the American Revolution by Terry Golway

With no formal military training, Nathanael Greene was an "unlikely warrior" according to Terry Golway in Washington's General: Nathanael Greene and the Triumph of the American Revolution. Yet the young Quaker from Rhode Island rose quickly in the ranks of the Continental Army to become one of Washington's trusted generals. He saw action during the early campaigns of 1776 and 1777 and served as Quartermaster General from 1778-1780. In 1780 Greene was appointed by Washington as commander of the Southern Army, replacing Horatio Gates after his defeat at Camden. Adopting unconventional tactics, Greene engaged General Cornwallis and the British Army in battles across the Carolinas. Although defeated at Guilford Courthouse, Hobkirk's Hill and Eutaw Springs, this series of Pyrrhic victories for the British Army set the stage for their surrender at Yorktown in 1781.

The war in the South would be like nothing Nathanael Greene experienced in the North, where the campaign season traditionally came to a close as the days shortened and temperatures fell. In the South there would be no winter 's respite from the ambitions of Lord Cornwallis and his eight thousand troops. Greene would not have the luxury of methodically rebuilding his pitifully small force of a thousand Continentals and slightly more militia. He would have to be prepared to fight through the winter, with the beaten, ill-equipped remnant of an army.

Very few of the rules Greene had learned on the battlefields of New Jersey and Pennsylvania would apply to his new command. The southern war would, by necessity, emphasize improvisation and mobility, for traditional set-piece battles had led to the American disasters in Savannah, Charleston, and Camden. Greene already was formulating an unconventional campaign employing guerrilla tactics of hit and run, never risking the all-or-nothing battle that might end the war. He had learned under Washington the importance of keeping soldiers in the field, for in that way, this army of rebels might win by losing, slowly and methodically draining the enemy until he tired of bloody sacrifice. Greene outlined his unconventional strategy to Washington, saying that he planned to equip a force of about a thousand infantry and eight hundred cavalry, supplemented by local militia. 'I see but little prospect of getting a force to contend with the enemy upon equal grounds,' Greene wrote, 'and therefore must make the most of a kind of partizan war.' Washington recognized the genius of the plan-and its necessity. 'I [entirely] approve of your plan for forming a flying army,' he wrote Greene on November 8.

Supplying such a force, however, presented another set of problems. Greene's supply line, when it functioned at all, stretched hundreds of miles, to Virginia and even farther north. When Greene asked for additional arms and perhaps a detachment of French soldiers based in Newport, a pained Washington explained that such help would not be coming.

Strategically, too, the South was unlike the North. There was no single vital river such as the Hudson to defend at all costs; instead there were dozens of smaller rivers, streams, and tributaries, not to mention disease-infested lowland swamps and rugged backcountry mountains, to consider when moving the army and supplies. Greene studied maps that bore place-names and features unknown to him: the Yadkin River, the Pee Dee, the High Hills of Santee. In the South, he would be a stranger in a foreign land.

Indeed, the South was unfamiliar in more than geography. Britain's southern strategy not only had broken two Continental armies hut had demolished civil authority in Georgia and South Carolina. While Greene certainly did not enjoy his dealings with politicians in the North, at least states like New Jersey and Pennsylvania had functioning legislatures that could assist the army with supplies and recruits. But that was no longer true in the lower South. South Carolina's governor, John Rutledge, had fled with Gates's army into North Carolina after the rout at Camden. Both South Carolina and Georgia were virtually restored to British rule, resisted only by bands of partisan guerrillas under the command of men like Francis Marion, Andrew Pickens, and Thomas Sumter. In the North, Greene developed a healthy distrust of militiamen. But in the South, these mobile, effective, and often ruthless citizen soldiers were the bulwark of the faltering American cause. They were all that was left after the reckless Gates destroyed the main southern army at Camden.

The patriot irregulars were not the only well-armed bands roaming the southern countryside. Tory militia-more numerous, more fervent, and more deadly than those Greene encountered in the North-took heart from Britain's victories in the region, and recruits were pouring into the ranks, eager to join the winning side. Tory units manned some of the forts the British were building in South Carolina, and they were an integral part of Cornwallis's ambitious plans for pacifying the lower South and bringing the war into North Carolina and Virginia.

Greene, then, would be facing not only Cornwallis and his increasingly notorious cavalry commander, Banastre Tarleton, but also thousands of his fellow Americans. The war in the South truly was a civil war and so would be more vicious than anything Greene had encountered.

It is impossible to exaggerate the gravity of Nathanael Greene's position in the fall of 1780. His new command promised to be a military, political, and logistical nightmare. After the devastating American defeats in Charleston and Camden, after Arnold's betrayal, an American victory still seemed as implausible as it did during the retreat through New Jersey in 1776 or during the winters at Valley Forge and Morristown. As he made his way south from state to state, begging for supplies, for money, for support beyond encouraging words, Nathanael Greene seemed to be riding toward oblivion, with death and destruction his only companions.

Greene's cavalry commander, Henry Lee, understood how close the cause was to failure. If the British defeated Greene, he wrote, 'the Carolinas and Georgia inevitably become members of the British empire. 'The enemy would then move into Virginia, and soon '[all] the country south of the James River ... would be ground to dust and ashes. Such misery, without hope, could not he long endured.' It would be just a matter of time, Lee wrote, before the cause was abandoned and 're-annexation to the mother country ... would be solicited and obtained.'

Everything, then, depended on Nathanael Greene.

From his days in Rhode Island, where politics was so intertwined with individual leaders-Hopkins versus Ward-Greene understood the importance of personal leadership, of the ability of charismatic leaders to inspire, encourage , and organize. He saw personal leadership exercised most dramatically in the person of George Washington, who by force of character alone kept alive the Revolution in its earlier, darkest hours. Now, at this new critical moment, surrounded by the shattered remnants of a broken cause, Greene knew that his own leadership ability would be put to the test. 'I believe the views and wishes of the great body of the people are entirely with us,' he wrote. 'But remove the personal influence of a few and they are a lifeless, inanimate mass, without direction or spirit.'

It was not the most sanguine expression of republican confidence in the people. One can hardly imagine Thomas Jefferson writing such a sentence. But then again, Thomas Jefferson had not marched through New Jersey during the lonely depths of 1776, had not begged his fellow citizens for forage and supplies in the fields of Pennsylvania, and had not tried to fight a war in the name of countrymen who so often seemed apathetic at best, or hostile at worst.