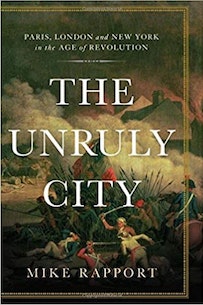 The Unruly City: Paris, London and New York in the Age of Revolution by Mike Rapport

Mike Rapport’s The Unruly City immerses readers in the places and spaces of the transatlantic Age of Revolution.

In New York and Paris, revolutions changed city buildings, physically and symbolically. For example, after the Revolutionary War, Pierre Charles L’Enfant redesigned New York’s colonial City Hall and converted it into Federal Hall with a version of the Great Seal of the United States on its pediment. In Paris, French Revolutionaries transformed royal palaces into halls of republican government.

The Unruly City also examines how and why New York and Paris became sites of revolution, while London did not. The following excerpt characterizes London’s conservative response to the American Revolution. Rapport describes how Londoners sought political reforms but did not call for a British revolution or a republic.

During the Wilkite drama of the 1760s and early 1770s, the alliance of opposition forces had been given spatial, geographical expression by the ways in which it used both the traditional sites of resistance (the City of London's Temple Bar, Mansion House and Guildhall) and the wider public spaces of the metropolis (Saint George's Fields). In London this represented an alignment of established interests, namely, the defence of the City's old freedoms and the established rights of Middlesex voters, with a broader, more popular protest movement that, when combined, gave the opposition to the government the potential to force through democratic change. Yet the Wilkite controversies ultimately yielded moderate rather than revolutionary results. This came in part because, by 1774, the king and Parliament had given way in London, even as they were enforcing their will in America. One of the reasons for this difference in policy was constitutional: the City of London could clearly base its claims on an actual charter, while the right of Parliament to tax the colonies was a matter for debate. It was also a matter of practical priorities: the British government could ultimately afford, however grudgingly, to accept the City's privileges since they were part of the existing political framework, while almost laughing out Wilkes's claim that all adult males should have the right to vote. Granting their colonial subjects political representation when even the vast majority of Britons had no political rights was a different matter altogether. Thus, by mobilising in support of 'Wilkes and Liberty', the wider metropolitan movement had lent its support to the already established freedoms of the City of London and the rights of the already enfranchised voters of Middlesex, but received nothing concrete in return. The result, by the time of the American War of Independence, had therefore been fundamentally a conservative one.

Yet this did not stifle the eighteenth-century movement for democratic reform as it was making its first infant steps. The American Revolution inspired a new, more energised debate among British reformers, but, unlike in America (or, later, in France), the discussions among well-heeled and well-connected progressives did not, in the end, connect with the popular protests of the kind seen earlier on Saint George's Fields. In fact, at the time of the American Revolution, the opposite happened: there was a parting of ways between 'reform' and the 'mob' that unfolded in the very buildings and spaces of the city during the inferno of violence in June 1780. So the story charts two courses: on the one hand, the response of the democratic reform movement to the American Revolution and, on the other hand, popular action that proved to be both alarmingly destructive and profoundly conservative, even reactionary.

British reformers saw in the struggle for American rights an opportunity for argument in favour of political change in Britain, but there were ambiguities in their reaction, which was made no easier when the two countries went to war with each other. Among chose who did demonstrate some sympathy for the colonists, in word and deed, was John Wilkes, but even he could be ambiguous. Wilkes had been showered with tribute~ from his many admirers across the Atlantic, bur he did not appear to reciprocate. In 1771 the Reverend John Ho rne Tooke, one of Wilkes's more abrasive and problematic London allies, claimed that the lanky Londoner 'always hated the Americans, was always the declared foe of their liberties, and condemned their glorious struggles for the rights of humanity'. When the Bostonian Patriot John Boylston visited Wilkes at the King's Bench Prison, he reported painfully that Wilkes sneered when the Londoner asked 'after his Friends in the Howling Wilderness'.

Yet Wilkes's actions spoke loudly, too. Before the war, he had kept up a spirited to correspondence with the Boston Sons of Liberty, who hoped that Wilkes's cause would help them advertise theirs in the metropolis. While lord mayor in June 1775, he presented to the Common Council a letter from New York's correspondence committee warning the government that the colony would fight if Parliament did not repeal the Intolerable Acts. When, in August, the king's heralds passed through Temple Bar to read the Royal Proclamation declaring the colonies to be 'in open and avowed rebellion', Wilkes allowed them to read it out at the Royal Exchange, but refused to lend them horses for their journey along Fleet Street (as was customary) and forbade any City official except the town crier from attending. With Britain now openly at war with the colonists and habeas corpus suspended, active British collaboration with the colonists was driven underground. Wilkes played a dangerous game when in the autumn of 1775 he helped Virginian Arthur Lee, one of America's first diplomats, and swashbuckling French playwright Pierre-Augustin Caron de Beaumarchais set up a trading company that was a front for the supply of French arms to the American rebels.

Working actively for the American cause was treason, and the outbreak of open war ensured that most Londoners, like people across Britain, rallied around the king. Yet the war did not stop the political reform movement from gathering pace. For radicals, the American crisis confirmed that royal power, supinely supported by a corrupt Parliament, was a real and growing danger to the liberties of British subjects on both sides of the Atlantic. The political conflict moved way beyond the issues that revolved around John Wilkes, the electors of Middlesex and the freedoms of the City. No one advocated a revolution or a republic—indeed, American independence and republicanism severed the possibility of any active political relationship between British reformers and American revolutionaries—but the former could still endorse the latter's essential interpretation of the imperial crisis. Like the American Patriots, they rounded on the very idea of parliamentary sovereignty and 'virtual representation' and embraced the idea that legitimacy instead came from the people.