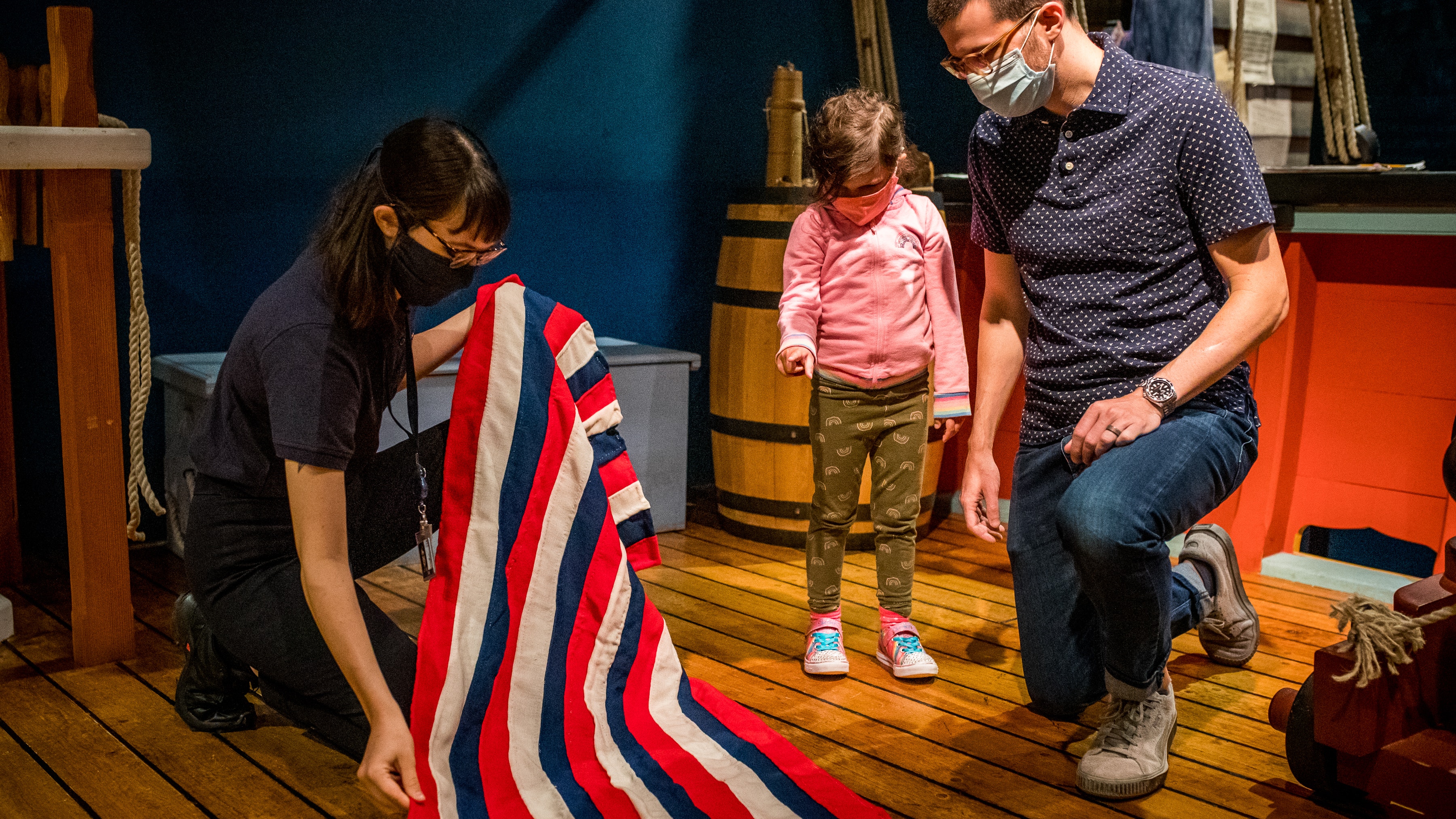 Why did 18th-century ships carry flags from many countries during the Revolutionary War? And what did it mean for a ship to fly its “true colours”? Beginning Flag Day Weekend, the Museum of the American Revolution will explore the American Revolutions global connections with the debut of 14 large handmade flags replicating those that were flown by Revolutionary-era privateers and navy ships at sea. The replica flags were created as part of the Museum’s True Colours Flag Project, sponsored by The Color Guard of the Pennsylvania Society of Sons of the Revolution.

The colorful flags will fly on the Museum’s outdoor plaza (weather permitting) from Thursday, June 10 – Flag Day, Monday, June 14, 2021, and again during the Museum’s Fourth of July celebration from Friday, June 28 – Monday, July 5, 2021. The flags, which range in size from 7x10 ft., 5x7 ft., and 2x40 ft., will then be displayed on the Museum’s in-gallery privateer ship, where they will be used as a storytelling tool to bring history to life for visitors of all ages. The project coincides with the Museum’s special exhibition Flags and Founding Documents, 1776 – Today, which will feature more than 40 rare American flags alongside historic documents from June 12 – September 6, 2021.

“After a year of engaging with each other virtually, we couldn’t be more excited to offer visitors of all ages the opportunity to experience these little-known stories of the Revolution in-person, through this spectacular display on our outdoor plaza and through authentic artifacts in our galleries,” said Dr. R. Scott Stephenson, Museum President and CEO. “We are so grateful to the Color Guard of the Sons of the Revolution for supporting this unique and exciting project.” 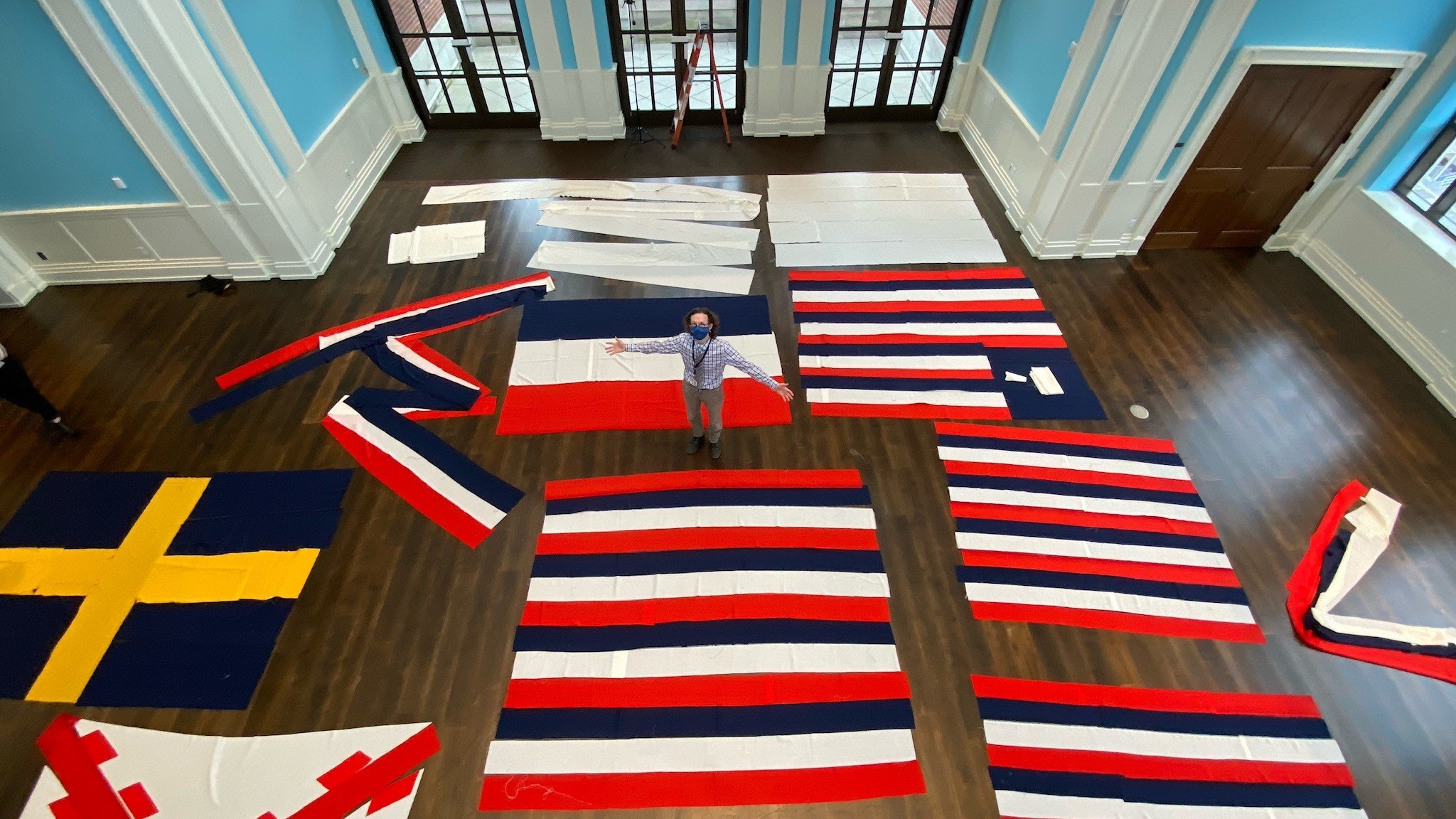 The True Colours Flag Project is an initiative to recreate a “suit of colours,” the full set of flags that were carried by ships during the Revolutionary War. Each ship carried not just their own country's flags but also flags from many other countries. This allowed them to show respect to foreign ports they visited by flying that nation's flag, but it also allowed ships to sail in disguise, misleading observers. However, before firing shots in battle, the rules of war dictated that a ship had to run up the “true colors” of their home nation.

Using wool bunting, a loosely woven material matching that of original flags, 12 modern makers from across the country are creating over a dozen flags entirely by hand, including those of the United States, Great Britain, France, Spain, Portugal, Sweden, and the Netherlands. At the Museum, visitors will have an opportunity to interact with the makers, including handling the flags, trying their hand at sewing, and learning about historic textile work. The seamstresses include Kim Boice, Kirsten Hammerstrom, Kaitlin Healy, Ruth Hodges, Nastassia Parker, Nicole Rudolph, Gabriela Salvador, Jana Violante, and Hannah Wallace, as well as Betsy Ross House interpreters Elise D’Avella, Jennifer Gray, and Carol Spacht.

During Flag Day Weekend, Saturday, June 12 – Monday, June 14, each visitor to the Museum will receive a free miniature version of the Commander-in-Chief’s Standard, the flag that marked George Washington’s presence on the battlefield. Visitors of all ages can enjoy pop-up talks about Revolutionary flags and a discovery cart exploring the story of Rebecca Flower Young, who worked in Philadelphia making flags and drum cases for the Continental Army. Families can explore the exhibit using a printed Family Guide full of games and activities.

Tickets to the Museum can be purchased by calling 215.253.6731 or at amrevmuseum.org. The Museum is currently open to the public Thursdays – Mondays from 10 a.m. – 5 p.m. with enhanced health and safety protocols. From June 23 – July 12, the Museum will be open daily. From June 10 – 14, visitors to the Betsy Ross House can bring their ticket stub to the Museum for $2 off admission (available only at the front desk). Flag Fest at the Betsy Ross House runs from June 13 - 19, 2021.