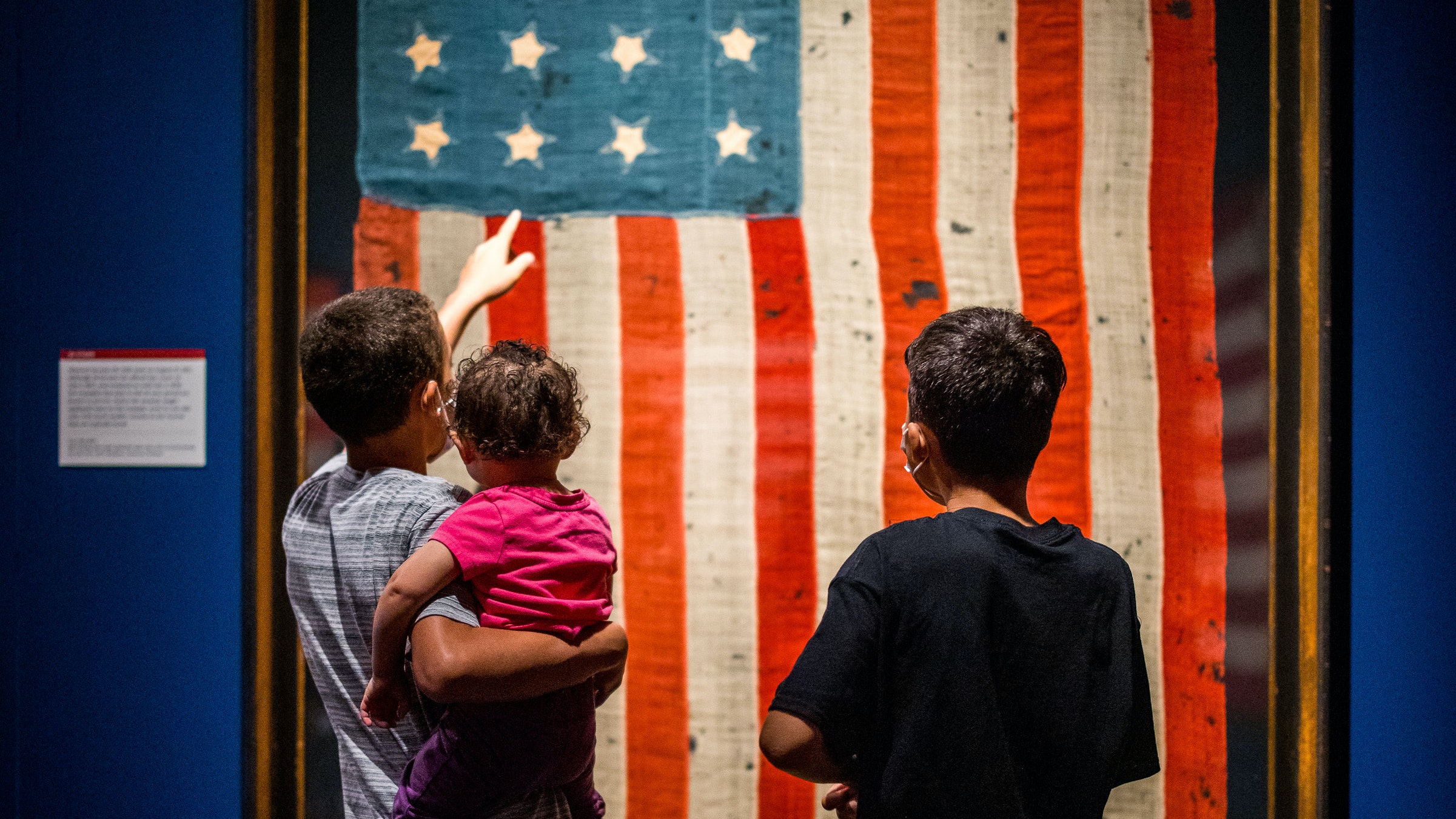 Savor the final days of summer at the Museum of the American Revolution during Labor Day Weekend! Don’t miss the last chance to see the special summer exhibition Flags and Founding Documents, 1776 – Today and more from Saturday, September 4 – Monday, September 6, 2021 from 10 a.m. – 5 p.m. Kids 12 and under will receive free admission to the Museum throughout the weekend (available for purchase at the Museum’s front desk only).

Labor Day Weekend marks the final days to see Flags and Founding Documents, 1776 – Today, which is on view through Sept. 6. The exhibit showcases dozens of rare American flags alongside historic early state constitutions and the first printing of the proposed U.S. Constitution of 1787 to shed light on the triumphs and tensions that the United States faced as it expanded. It traces the evolution of the Stars and Stripes through the addition and subtraction of stars as new states joined the Union and the nation battled through the Civil War, serving as a visual narrative of America's national story. As part of the exhibition, visitors of all ages can express what’s meaningful to them by making their own flag and using movable magnetics to write their own constitution at activity stations. Visitors can enjoy pop-up talks with a Museum educator that will examine replica Revolutionary flags learn the story of Rebecca Flower Young, who worked in Philadelphia making flags and drum cases for the Continental Army, at a Discovery Cart. Families can explore the exhibit using a printed Family Guide full of games and activities. 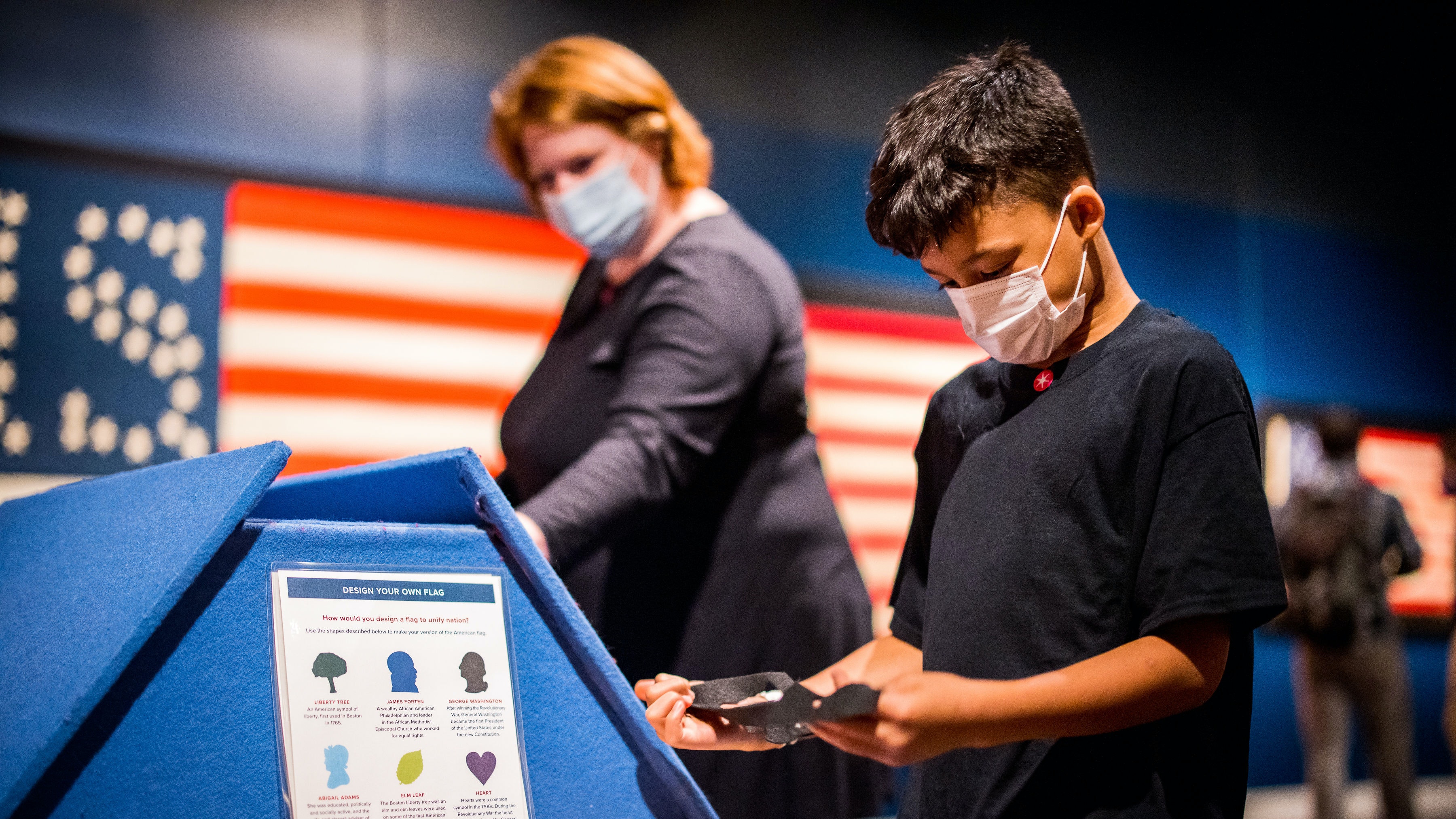 As part of the Museum’s Meet the Revolution series, guests will meet Noah Lewis, a costumed historic interpreter portraying the Revolutionary veteran of African descent Edward “Ned” Hector. Throughout the weekend, visitors will meet Hector in the 1820s as a respected resident of Plymouth Township, Pennsylvania, as he fights to gain a pension for service in the war. In keeping with the spirit of Labor Day, Lewis also will discuss the skills and innovations of African American teamsters – predecessors of the workers who formed the labor unions we know today – as well as everyday life in the 18th and early 19th centuries. The weekend also marks the final display of the full “suit of colours” created as part of the Museum’s True Colours Flag Project. Visitors can view the large recreated early flags from countries like the United States, France, Britain, Spain, Portugal, and more on display at the grand staircase in the Rotunda. The flags will then be moved to the Museum’s replica privateer ship for ongoing opportunities for engagement.

Labor Day Weekend marks the last chance to take advantage of the Museum’s “Art and America” joint ticket with the Philadelphia Museum of Art. The ticket includes access to both museums for a discounted price and will be on sale until September 6. The adult joint ticket is $35 (a savings of $11). Purchased tickets can be redeemed until September 20 at both museums.

Tickets to the Museum can be purchased by calling 215.253.6731, at amrevmuseum.org, or at the front desk. The Museum is currently open to the public daily from 10 a.m. – 5 p.m. with enhanced health and safety protocols. As of August 12, all guests ages five and up will be required to wear a face mask, regardless of vaccination status.