Now on View: Art and Artifacts on William B. T. Trego's Vision of Valley Forge 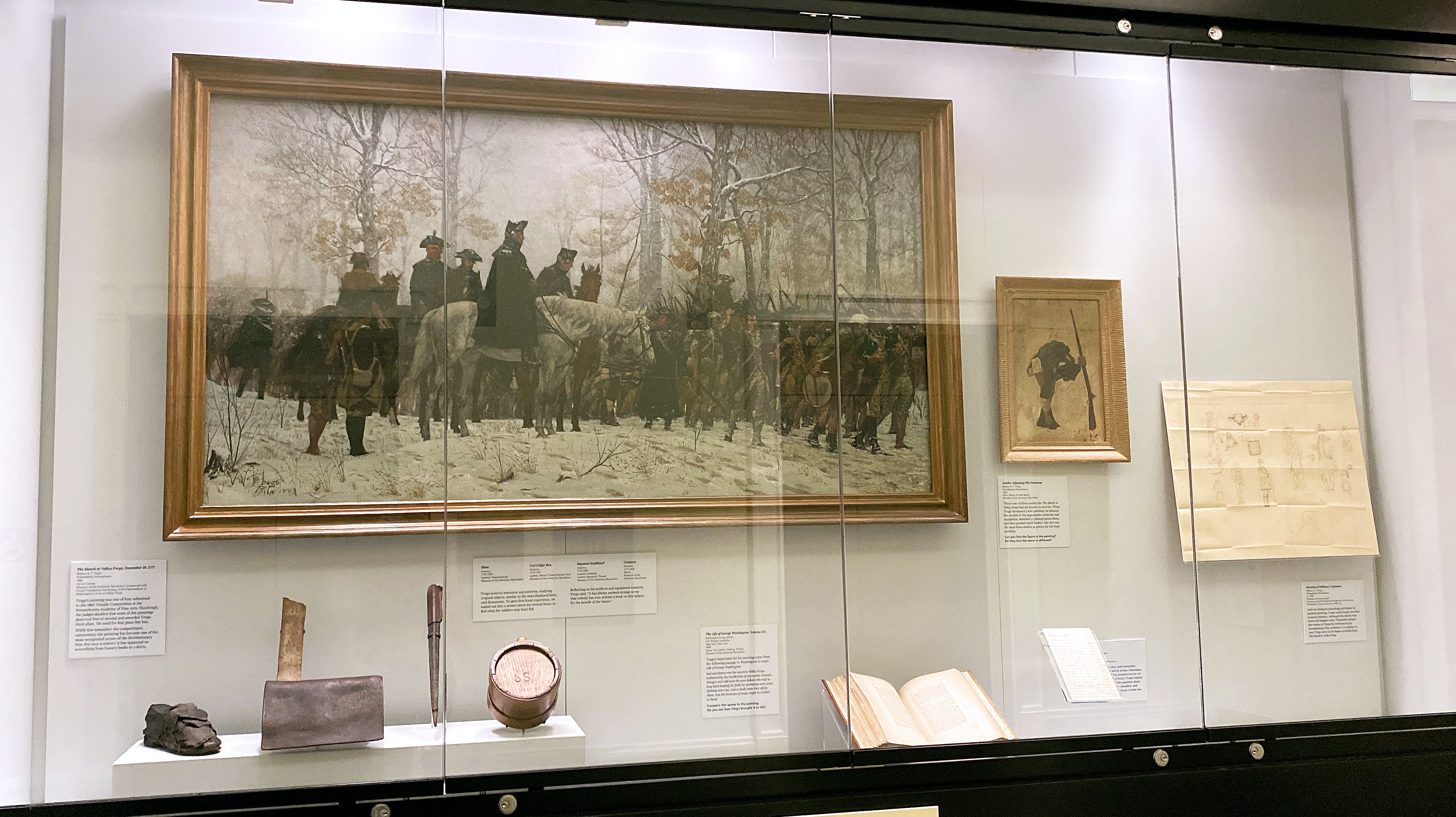 In 1883, 100 years after the Revolutionary War ended, artist William B. T. Trego brought the American army's journey to Valley Forge, a moment of pride and pain, to life.

Born in Yardley, Pennsylvania, in 1858, Trego studied art with his father despite losing the use of this right hand and most of the use of his left hand from an illness, possibly polio, when he was 18 months old. He learned to paint by wedging his brush between the fingers of his right hand and moving it with his left hand. His talent led him to study at Philadelphia's Pennsylvania Academy of Fine Arts and in France. Early in his career he earned a reputation as a talented American painter focusing on American military subjects.

Out of his more than 150 surviving original works of art, The March to Valley Forge remains his most famous. It has become an iconic depiction of the sacrifices General George Washington and his soldiers made during the Revolutionary War.

Take a closer look at art and artifacts on display in the second floor atrium at the Museum in a case gifted by The Color Guard of the Pennsylvania Society of the Sons of the Revolution. 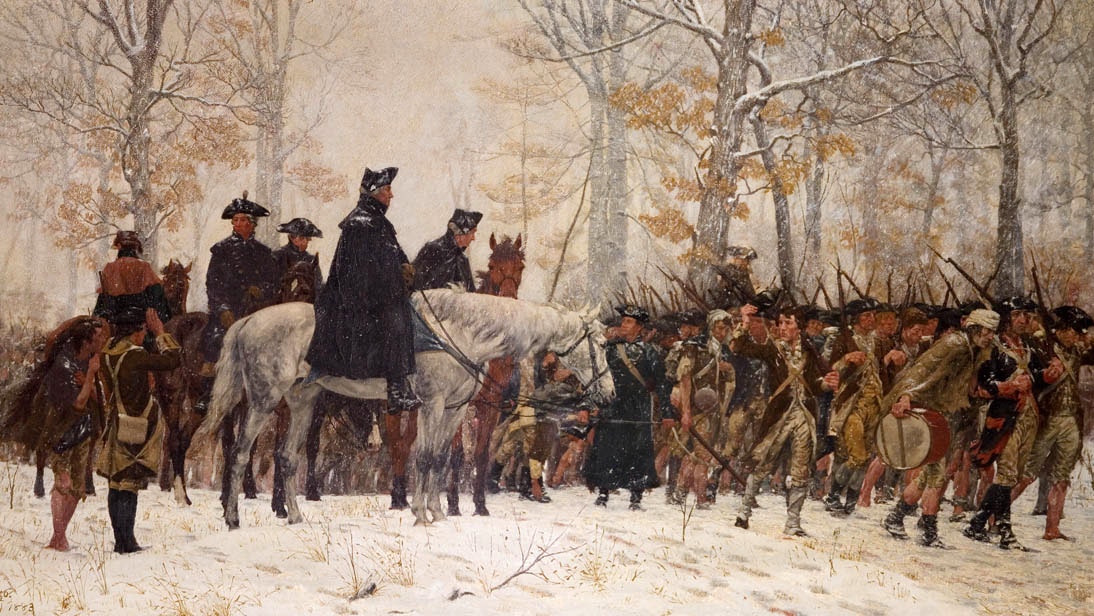 Trego's painting was one of four submitted to the 1883 Temple Competition at the Pennsylvania Academy of Fine Arts. Shockingly, the judges decided that none of the paintings deserved first or second and awarded Trego third place. He sued for first place but lost.

While few remember the competition's controversy, the painting has become one of the most recognized scenes of the Revolutionary War.

This iconic depiction of the march to Valley Forge by William B. T. Trego was painted in Philadelphia and exhibited at the Pennsylvania Academy of Fine Arts in 1883. See Content 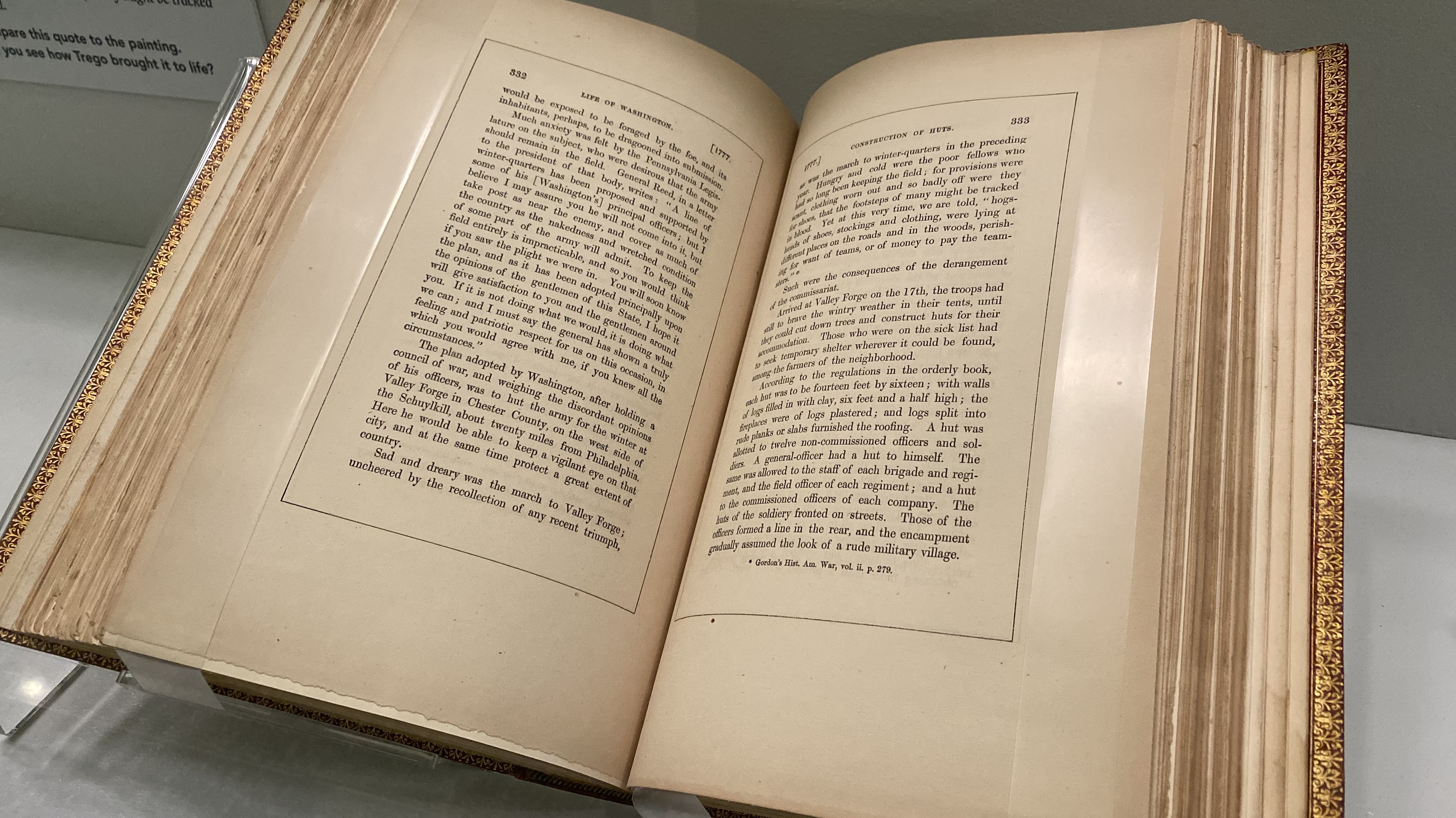 Trego's inspiration for his painting came from the following passage in Washington Irving's Life of George Washington:

"Sad and dreary was the march to Valley Forge, uncheered by the recollection of any triumph... Hungry and cold were the poor fellows who had so long been keeping the field, for provisions were scant, clothing worn out, and so badly were they off for shoes, that the footsteps of many might be tracked in blood." 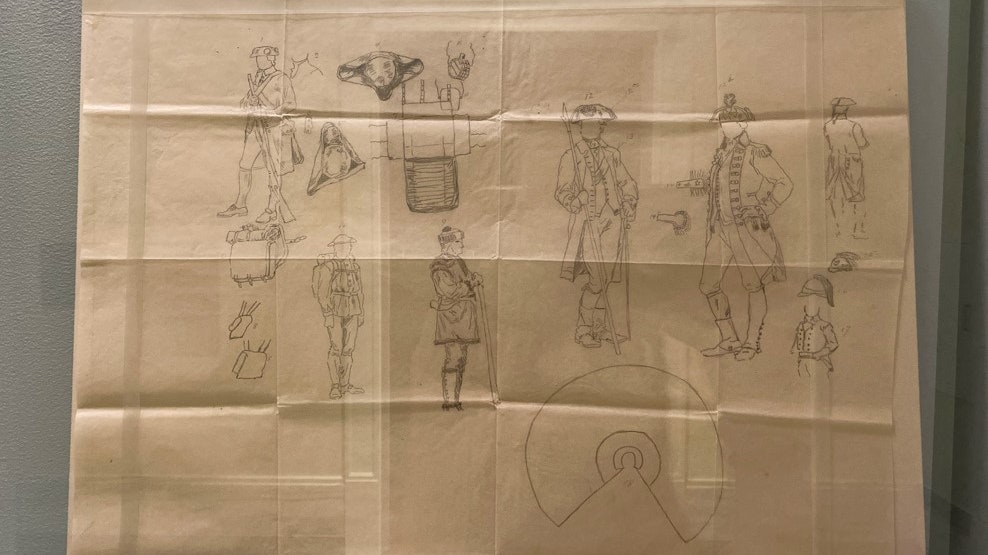 After he finished researching and before he painted anything, Trego would rough draft ideas in pencil sketches. Although this sketch was drawn for Belgian artist Théophile Lybaert who wrote to Trego for information on Revolutionary War uniforms, it is similar to ones Trego drew as he began to think about The March to Valley Forge. 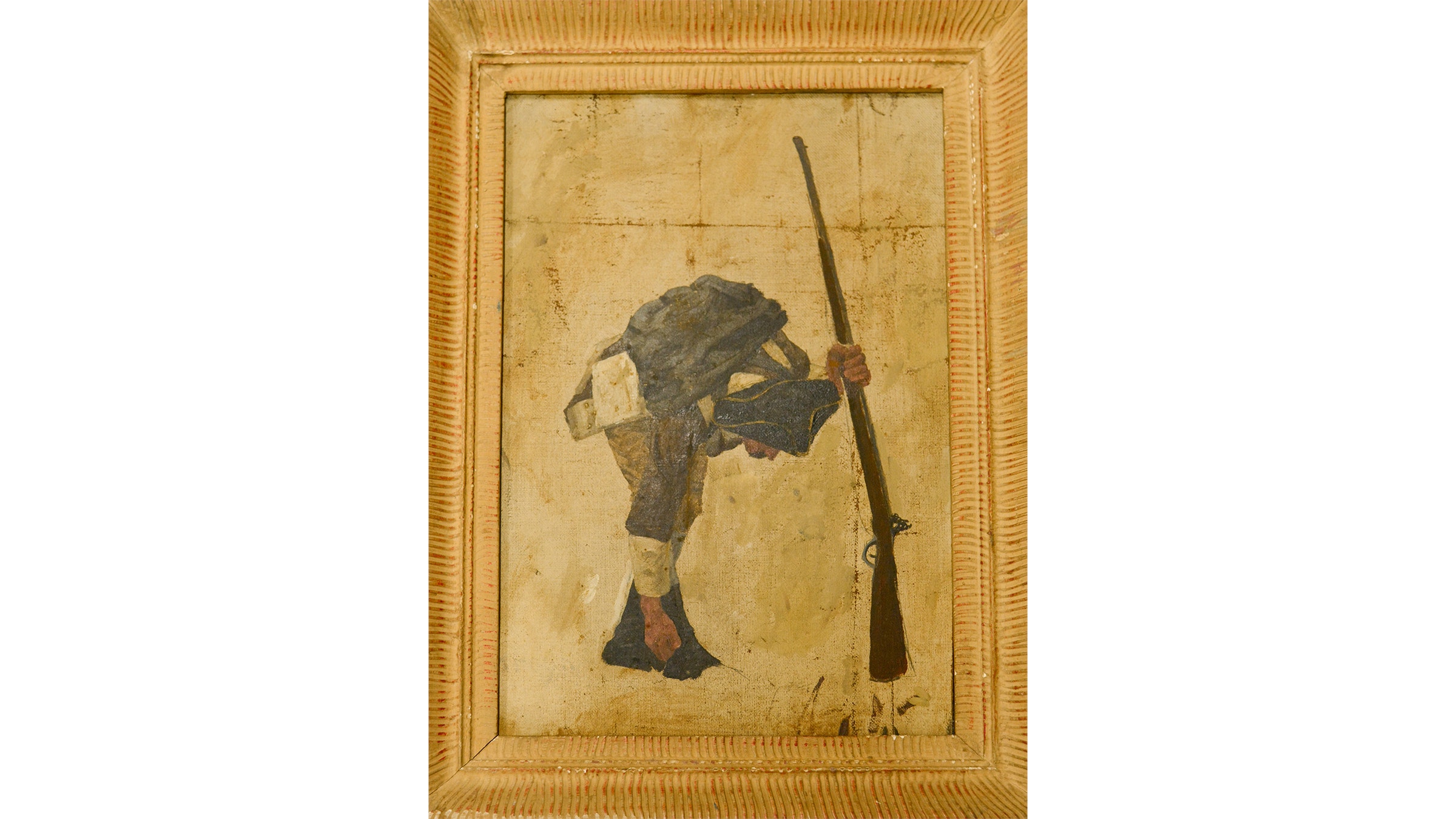 This is one of three studies for The March to Valley Forge that are known to survive. When Trego developed a new painting, he dressed live models in the appropriate uniforms and equipment, sketched or photographed them, and then painted small studies like this one. He used those studies as guides for the final painting. 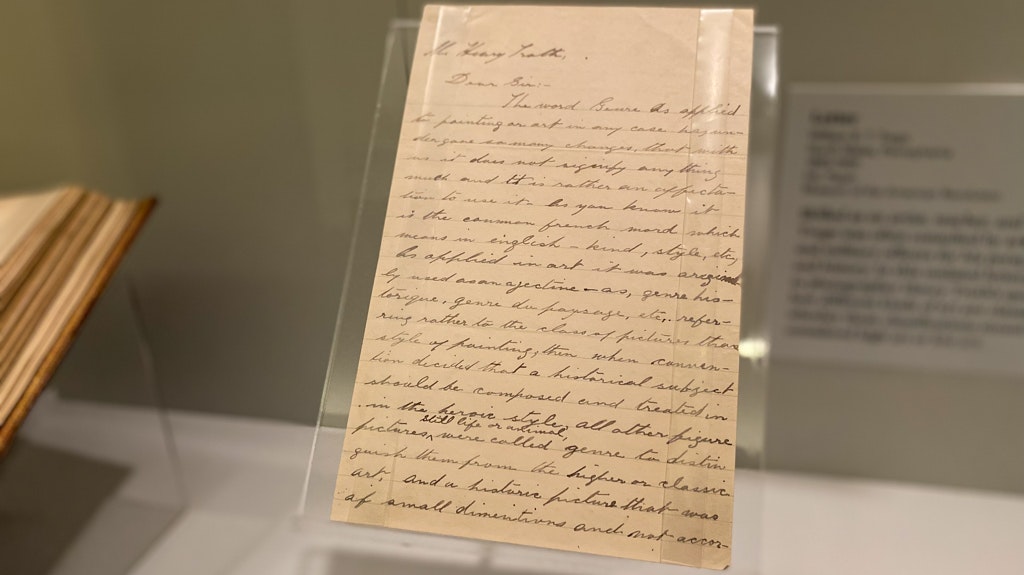 Skilled as an artist, teacher, and researcher, Trego was often consulted by artists, historians, and military officers for his perspectives on art and history. In this undated letter, Trego replied to photographer Henry Troth's question about how different kinds of art are classified, and whether those classifications meant a work was considered high art or low art. 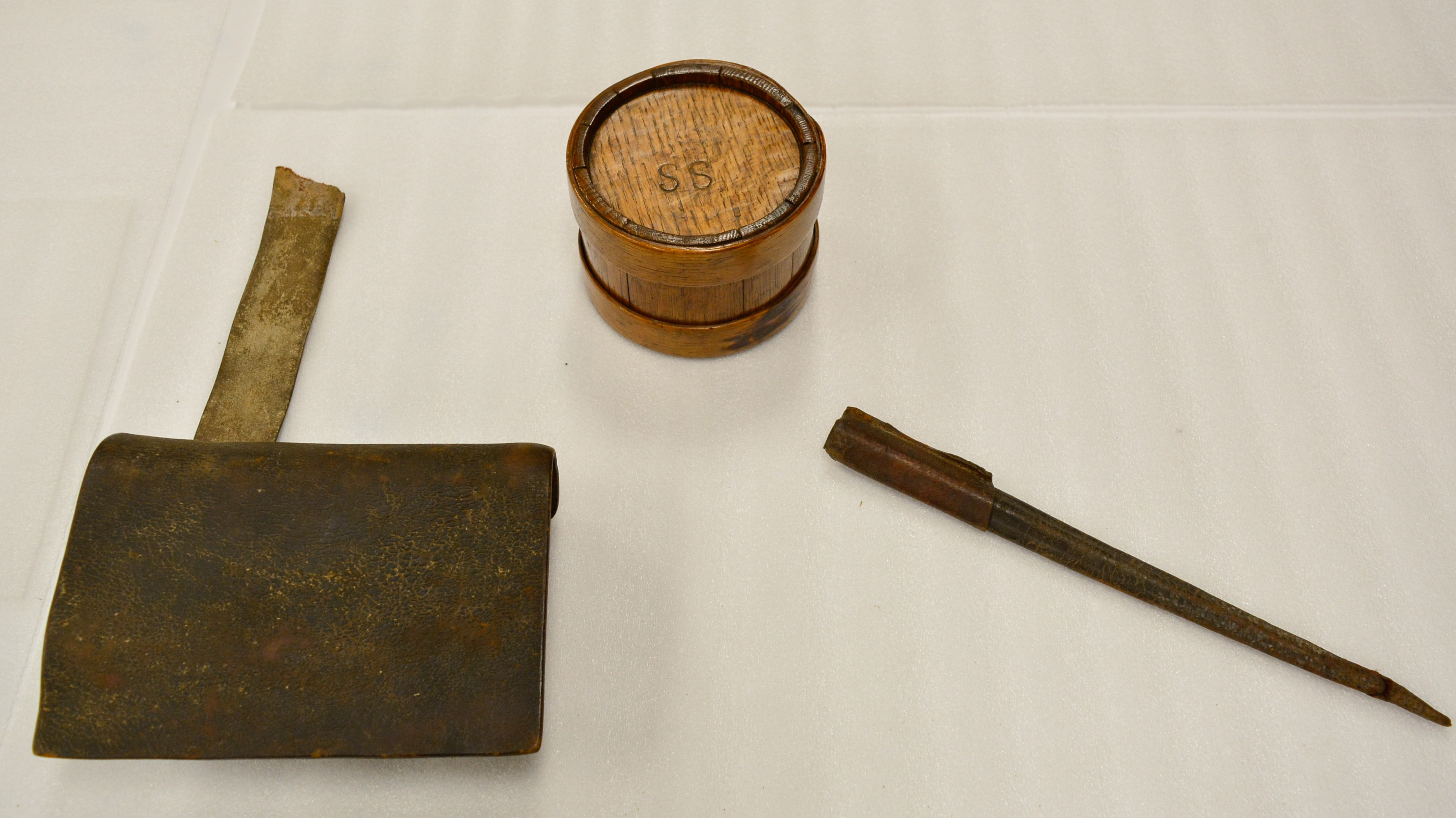 Trego scoured museums and archives, studying original objects and documents. To gain first-hand experience, he waded out into a winter storm for several hours to feel what the soldiers may have felt. Reflecting on his uniform and equipment research, Trego said, "It has always seemed strange to me that nobody has ever written a book on this subject for the benefit of the future."

William B. T. Trego and Don Troiani shared a similar approach to historical painting. Both had a love of military history, historical research, and collecting artifacts. In Liberty: Don Troiani's Paintings of the Revolutionary War, on view at the Museum through Sept. 5, 2022, dozens of Troaini's paintings hang alongside some of personal collection of Revolutionary-era artifacts.

I think of myself as a historian as much as an artist. 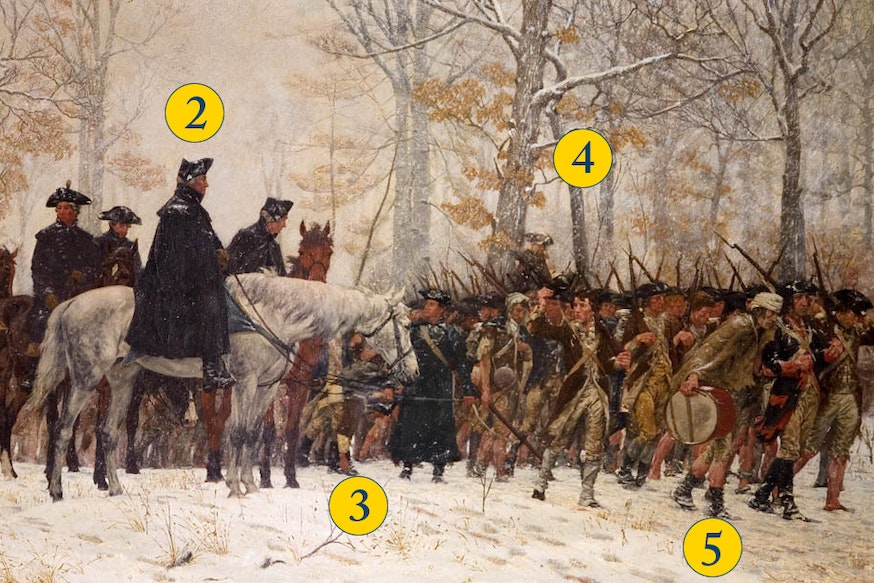 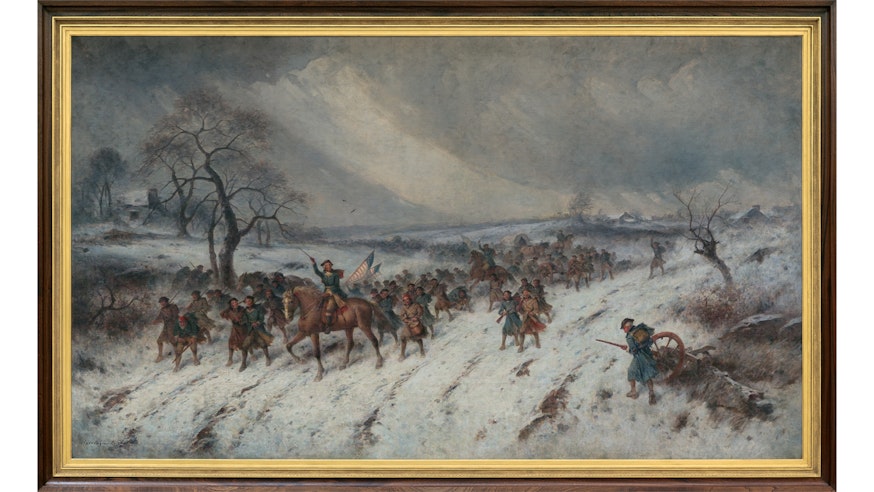