George Washington's receipts help us understand the craftspeople who manufactured objects for the use within his tent. One example shows us how and from whom he acquired tin cooking and dining equipment in 1776. 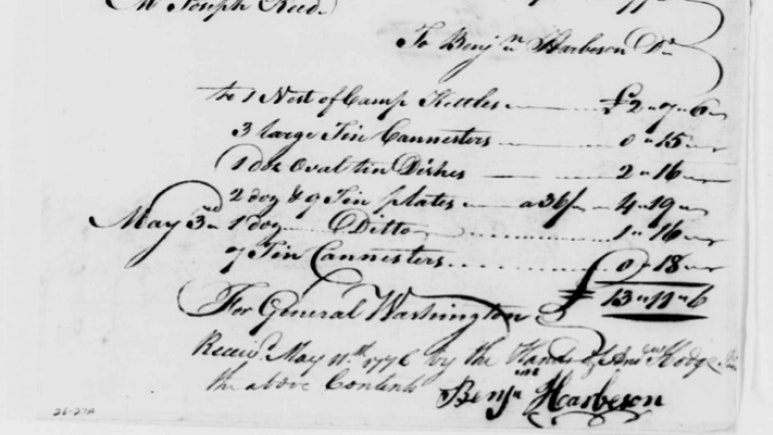 Early in 1776, with the Siege of Boston coming to a close, George Washington realized that he would soon go on campaign with the Continental Army. For nearly ten months he lived in the Longfellow House in Cambridge, Massachusetts, using it as the army’s headquarters. Now, to command his army in the field, Washington needed to furnish a truly mobile home.

That spring, he relied on Joseph Reed, a prominent Philadelphia lawyer and newly appointed Adjutant General of the Continental Army, to purchase a number of objects on his behalf, including tents, trunks, cooking implements, serving equipment, and candle sticks. Washington, with his fastidious accounting practices, kept receipts for nearly all of his purchases. Today, these receipts allow us to gain a deeper understanding of the craftspeople who manufactured objects for the use within Washington’s field headquarters and to connect them to surviving artifacts.

For example, we know that on April 8, 1776, Reed placed an order for tin kettles, plates, canisters, and oval dishes at Benjamin Harbeson’s shop located on Market Street, between Second and Third Street, at the sign of the Golden Kettle. Born on May 24, 1729, Harbeson left Ireland and arrived in Philadelphia at the young age of eight. On July 30, 1754, at age 25, he married his wife, Eliphet Harper, at Christ Church. Four years later, he placed his first advertisement as a copper and tinsmith in the Pennsylvania Gazette. 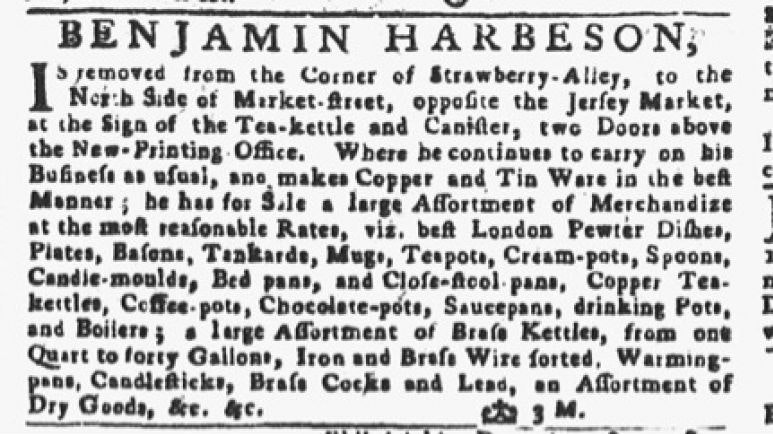 With tensions growing between England and the colonies, Harbeson signed the resolution of non-importation in November 1765 with over 300 other citizens in Philadelphia including shopkeepers, large merchants, men, women, Quakers, Jews, Germans, and people from all classes. They vowed not to import any goods from England until the repeal of the Stamp Act, making it nearly impossible for Harbeson to obtain sheets of tinned iron and copper to manufacture into objects. Feeling the injustice of the English taxes placed on the colonies, Harbeson made this business choice and also cemented his political ideals for years to come. In March of 1766, four months later, Parliament repealed the tax.

Between 1754 and 1770, Harbeson moved his shop six times in Philadelphia and in 1769 began advertising it as a “copper warehouse.” On January 23, 1775, Harbeson again announced publicly his allegiance to America when he signed the Association of the Continental Congress, which stated:

“WHEREAS it has been judged necessary for the preservation of our just rights and liberties, to lay a restraint on our importation, and as the freedom, happiness and prosperity of a state greatly depend on providing within itself a supply of articles necessary for subsistence, cloathing and defense, a regard for our country, as well as common prudence, call upon us to encourage agriculture manufactures and economy.”

The resolves specifically called for the manufacturing of copper into sheets, bottoms, and kettles, and the making of tin plate.

At the outbreak of the Revolutionary War, Harbeson continued producing tin and copper wares, and also received a commission to command the 2nd Battalion of Philadelphia Associators. During the British occupation of Philadelphia, Harbeson moved his business west to Lancaster and remained there until the fall of 1778, when the British withdrew back to New York City. Upon returning to Philadelphia, Harbeson found that British soldiers had occupied his home and shop located near Christ Church, and they left a “mahogany china table.” From the late 1770s, Harbeson focused on copper smithing and the production of stills for distilling alcohol. He remained in Philadelphia until his death on September 24, 1808. 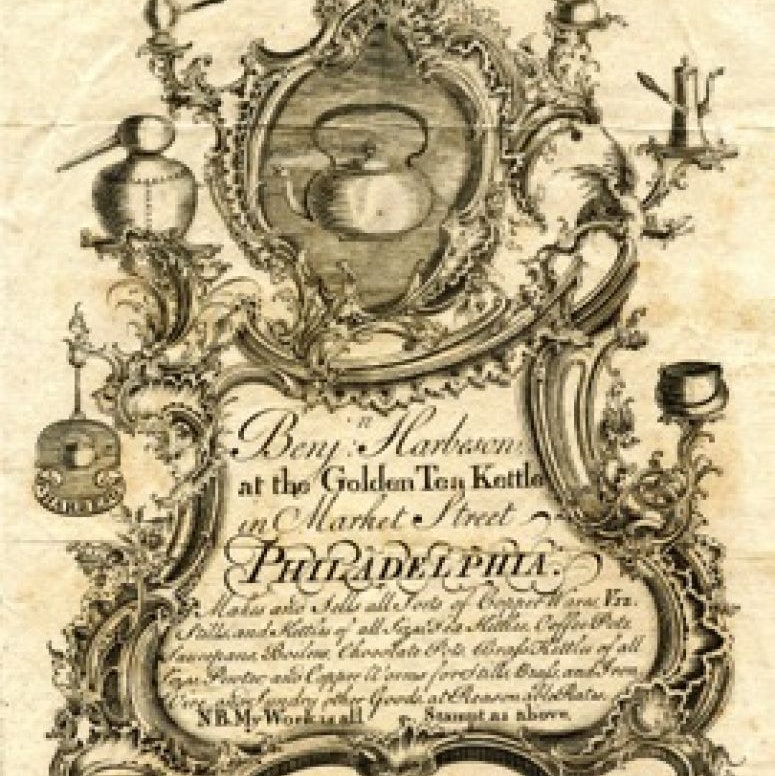 A surviving trade card dated November 13, 1776, from the Joseph Downs Collection at the Winterthur Library, provides insight into the different pieces that Harbeson produced, which included teakettles, coffee pots, saucepans, boilers, and chocolate pots. H. Dawkins, the engraver of the trade card, also illustrated many of Harbeson’s wares along the boarder of the trade card and his shop sign. Harbeson also noted on the bottom of his trade card “My work is all stampt as above” making his work identifiable. The Winterthur Museum, Garden & Library in Delaware owns two pieces of copper marked to Harbeson’s shop.

While Washington’s receipt may seem mundane, it opens avenues of further research and understanding into the lives the tradespeople who produced the items for the Continental Army’s Commander in Chief.

About the Author
Neal Hurst completed a seven-year apprenticeship as a tailor at the Colonial Williamsburg Foundation's Department of Historic Trades and holds a BA in history from The College of William and Mary. Hurst also oversaw the tent reconstruction phase of the Museum’s First Oval Office Project. He was a Lois F. McNeil Fellow in the Winterthur Program in American Material Culture at the University of Delaware at the time of this writing and is now the Associate Curator of Costume and Textiles at the Colonial Williamsburg Foundation.