Our 2020-21 special exhibition, When Women Lost the Vote: A Revolutionary Story, 1776-1807, which ran from Oct. 2, 2020 through April 25, 2021, was installed throughout our core galleries. This audio tour, narrated by Director of Education and Community Engagement Adrienne Whaley, was created to help guests navigate the exhibition and dig deeper into its objects and stories.

When Women Lost the Vote explored the experiences of women from many backgrounds in the Revolutionary Era. In particular, it uncovered the little-known history of the nation’s first women voters, who cast ballots in New Jersey over a century before the passage of the 19th Amendment.

This audio tour was marked with triangular red labels with audio tour numbers throughout the galleries. 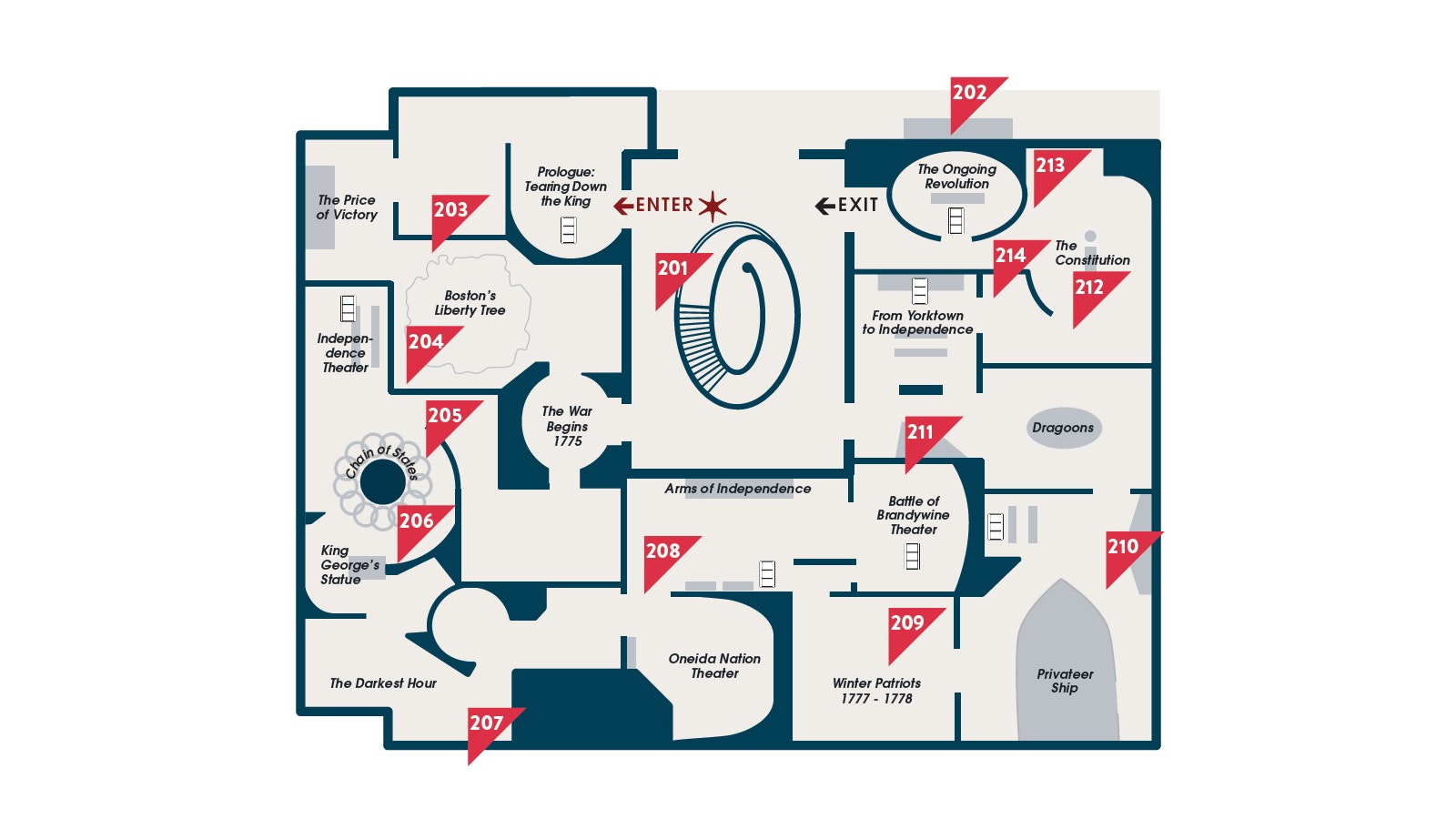 View a PDF version of the When Women Lost the Vote audio tour guide to take you through the Museum's special exhibition. See PDF

Adrienne Whaley, the Museum's Director of Education and Community Engagement, welcomes you to the Museum of the American Revolution and to the Museum's current special exhibition, When Women Lost the Vote: A Revolutionary Story, 1776-1807. Throughout the tour, you will learn about the little-known history of the nation’s first women voters, who cast ballots in New Jersey over a century before the passage of the 19th Amendment.
Open the Stop 201 Transcript

Before stepping into When Women Lost the Vote, which is displayed throughout the Museum's core exhibition, take a look at a collection artifacts in a new case across from the elevators on the second floor.

Stop 203 - A Transformed Generation of Women?

Learn about women who lived in the mid-Atlantic British colonies in the 1700s, including Margaret Kemble Gage, Elizabeth "Betty" Dorn, and Jane Sloan LeConte, and the diversity of colonial New Jersey.
Open the Stop 203 Transcript

Explore how women helped lead boycotts against British imports and sought American-made goods in a "homespun" movement. Plus, learn about the laws prohibiting property ownership for married women, as well as the legal system of "coverture."
Open the Stop 204 Transcript

At this bonus stop that is part of the Museum's audio tour of the core exhibition, hear a reading of a poem written by Phillis Wheatley and learn about the arguments over "American Liberties" and whether the phrase "Liberty for All" would really include all people.
Open the Stop 301 Transcript

While all of the new states created constitutions for their governments, many used male pronouns (like he, him, and his) when referring to citizens. But New Jersey used the gender-neutral "they." Learn more about the implications of using "they" and the later decisive – and revolutionary – change to "he or she."
Open the Stop 206 Transcript

During the Revolutionary War, women were barred from formal military service. However, a few women disguised themselves as men to enlist in the army. Explore more about Deborah Sampson, a woman who dressed in "men's clothes" and enlisted in the Continental Army in 1782.
Open the Stop 207 Transcript

Only some women chose to side with the Revolution. Hear the stories of Tyonajanegen, or Two Kettles Together, of the Oneida Indian Nation, who fought for the Revolutionary cause at the Battle of Oriskany, as well as the story of the Baroness von Riedesel, who joined her husband, a commander of Hessian forces who served with the British, and was taken prisoner at the Battle of Saratoga.
Open the Stop 208 Transcript

Learn how women like Mary "Polly" Fraser risked everything for the Revolution and how women like Annis Boudinot Stockton entered new positions of power and visibility. Plus, see a portrait of Mary McIlvaine Bloomfield, an early New Jersey voter, painted by Charles Willson Peale.
Open the Stop 209 Transcript

As "confiscation laws" called into question the meaning and status of women’s citizenship in the new nation, women implored lawmakers to determine if married women had a right to a political or legal identity separate from their husbands. Discover the stories of Philadelphia Quaker Elizabeth Drinker, whose family had property seized, and Rebecca VanDike of New Jersey, who cleverly circumvented these laws.
Open the Stop 210 Transcript

The Revolutionary War disrupted the institution of slavery, and not always in the ways you would expect. Some American Revolutionaries fought to uphold slavery, while others came to see it as incompatible with a democratic republic. Learn more about African Americans who chose to flee to the British in their quests for freedom, and hear from Elizabeth Freeman, an enslaved woman called Mumbet, who sued for her freedom in court – and won.
Open the Stop 211 Transcript

Women and people of color played an increasingly crucial role in politics with the rise of the first national political parties in the new American Republic in the 1790s. Discover objects women voters and voters of color saw on election days in New Jersey when they held the right to vote from 1776 to 1807.
Open the Stop 212 Transcript

At a life-size scene, called a tableau, examine a moment frozen in time that depicts three women standing inside the Rocky Hill Inn in Montgomery Township, Somerset County, New Jersey, during an 1801 election. What is their story?
Open the Stop 213 Transcript

Stop 214 - The Ongoing Challenge of Democracy

The Museum identified the names of 163 women voters on nine poll lists who cast ballots across New Jersey from 1800 to 1807. Their stories show us a Revolution with unfinished business.
Open the Stop 214 Transcript

Does the Museum offer other audio or guided tours?
Yes and yes! The Museum offers an audio tour of our core exhibition narrated by the Museum’s President and CEO Dr. R. Scott Stephenson, and featuring the “voices” of Phillis Wheatley, the first published African American female poet, and Baroness Frederika von Riedesel, who aided the wounded and journaled about her experience. Inquire at the Guest Services Desk about how you can listen on a Museum-issued wand or on your personal device.

The Museum is happy to also offer a wide range of guided tour options, including early access, highlights, and family tours. 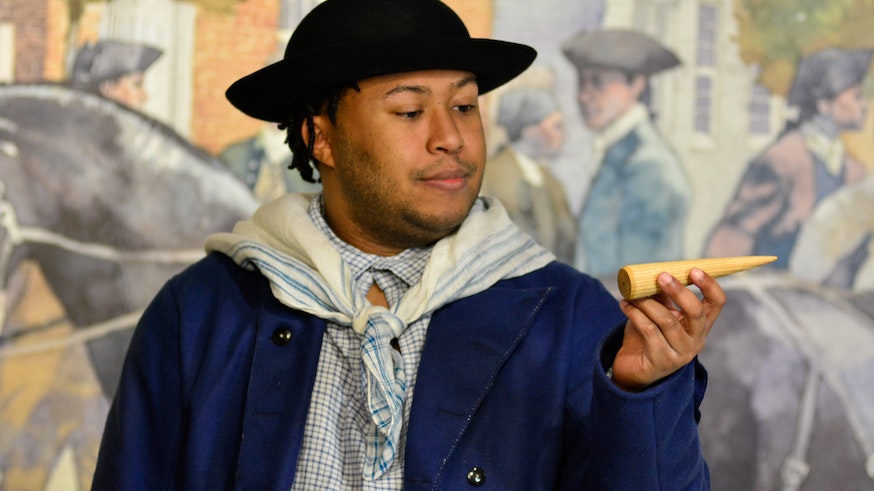