The American Revolution nearly failed in 1776. In the months after the United States declared its independence from Great Britain, the British Army, and British Navy nearly crushed the “rebellion.” The new Continental Army led by General George Washington lost control of New York City after a series of battles. The army dwindled in both size and spirit, and it appeared as if the Revolution had come to a quick end.

Use the three paintings below, all of which were painted by nationally renowned historical artist Don Troiani, to complete this scavenger hunt. 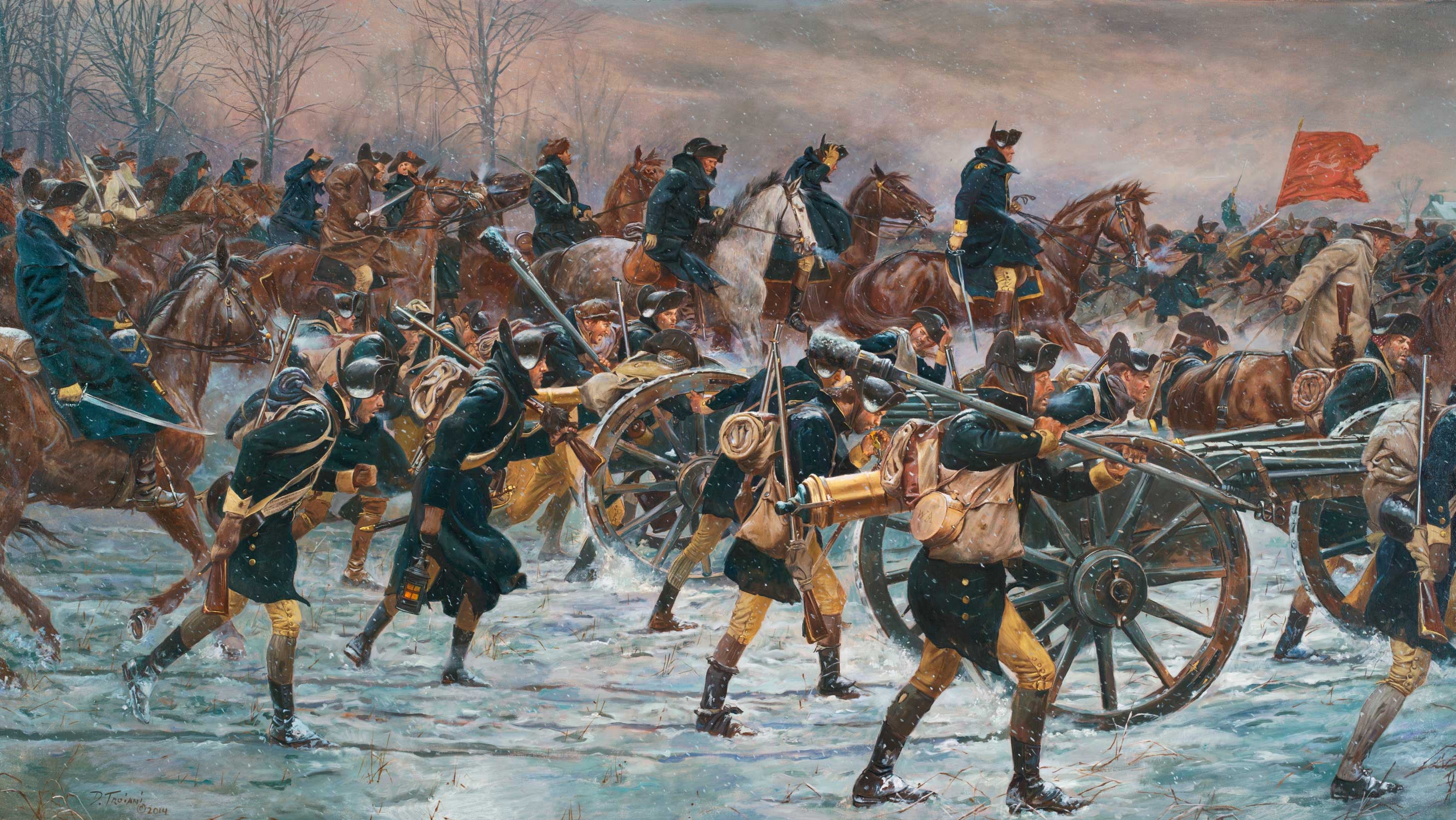 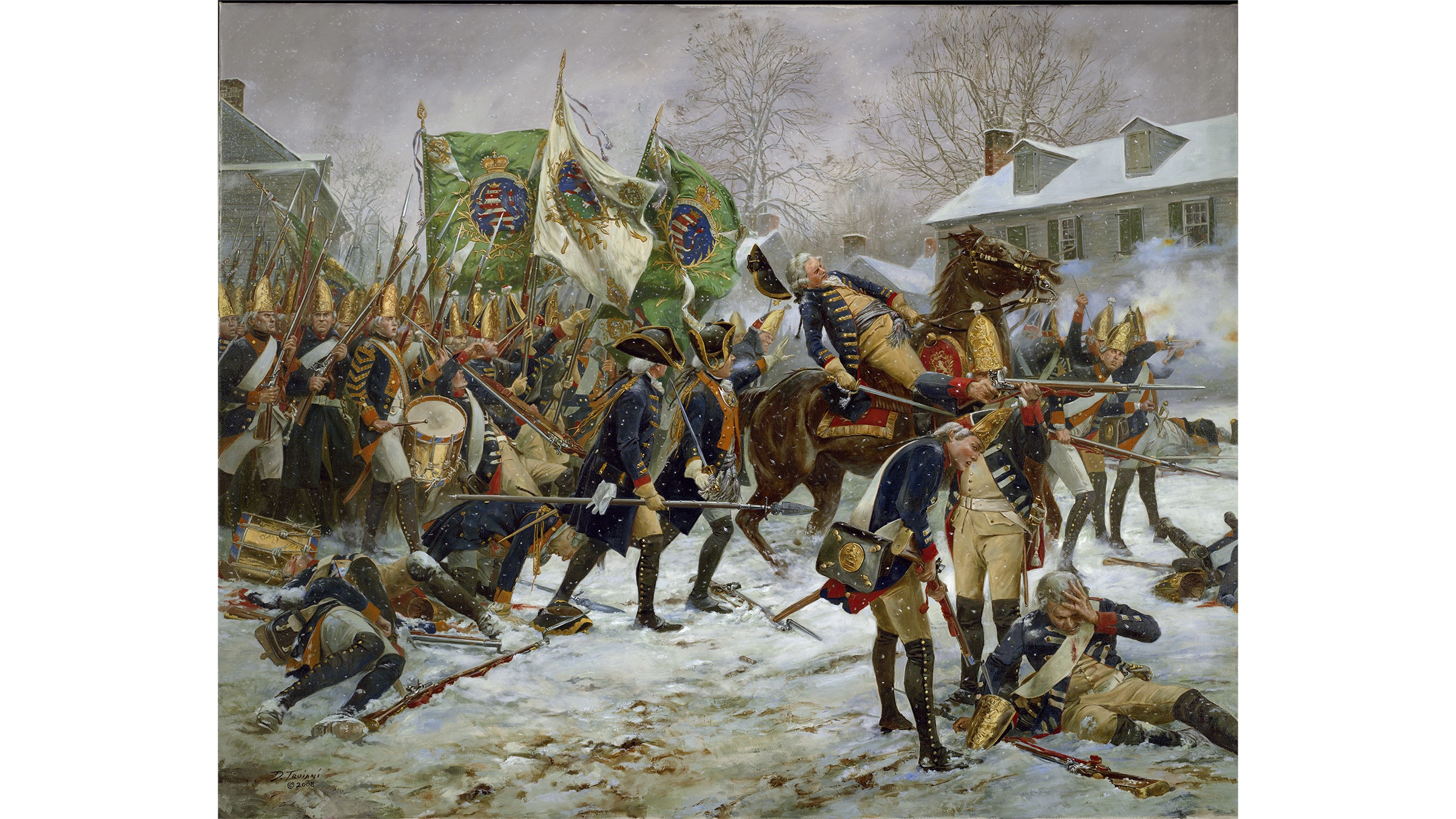 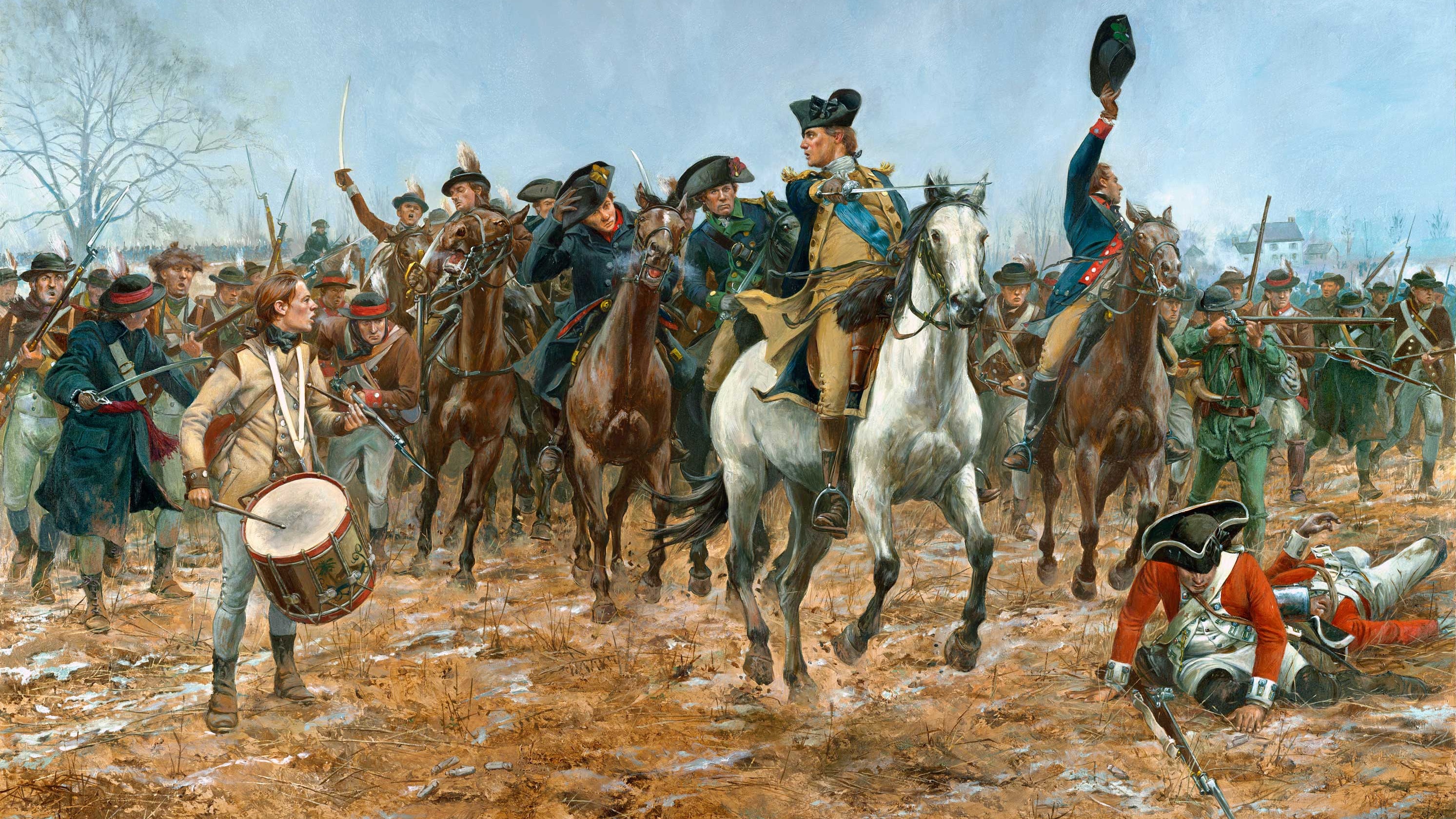 Washington at the Battle of Princeton, 1777 Courtesy Don Troiani

The three paintings above and the artifacts featured below are all on display in the Museum's special exhibition Liberty: Don Troiani's Paintings of the Revolutionary War, open through Sept. 5, 2022.

Let's get started on this 10 Crucial Days-themed scavenger hunt of the exhibit. We're sorry if "The 12 Days of Christmas" gets stuck in your head along the way. Good luck! 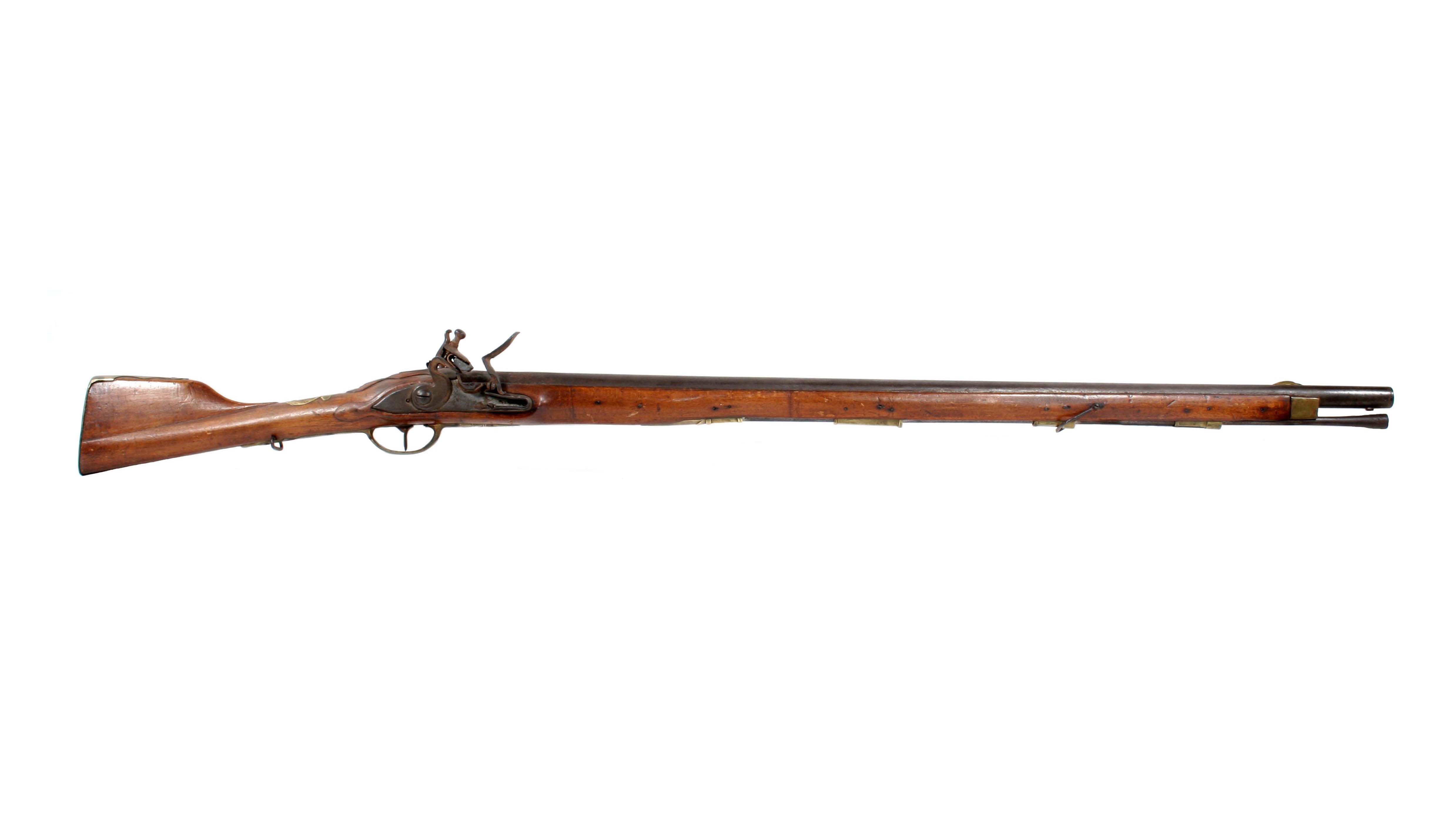 The Continental Army captured about 1,000 muskets from the three Hessian regiments that surrendered following the Battle of Trenton. This German-made musket from the period, with its 41-inch-long, .72-caliber barrel, is comparable in size to the British Pattern 1769 Short Land musket. It weighs about 10 pounds. Can you find muskets like this one in Troiani’s painting of the Hessians at Trenton? 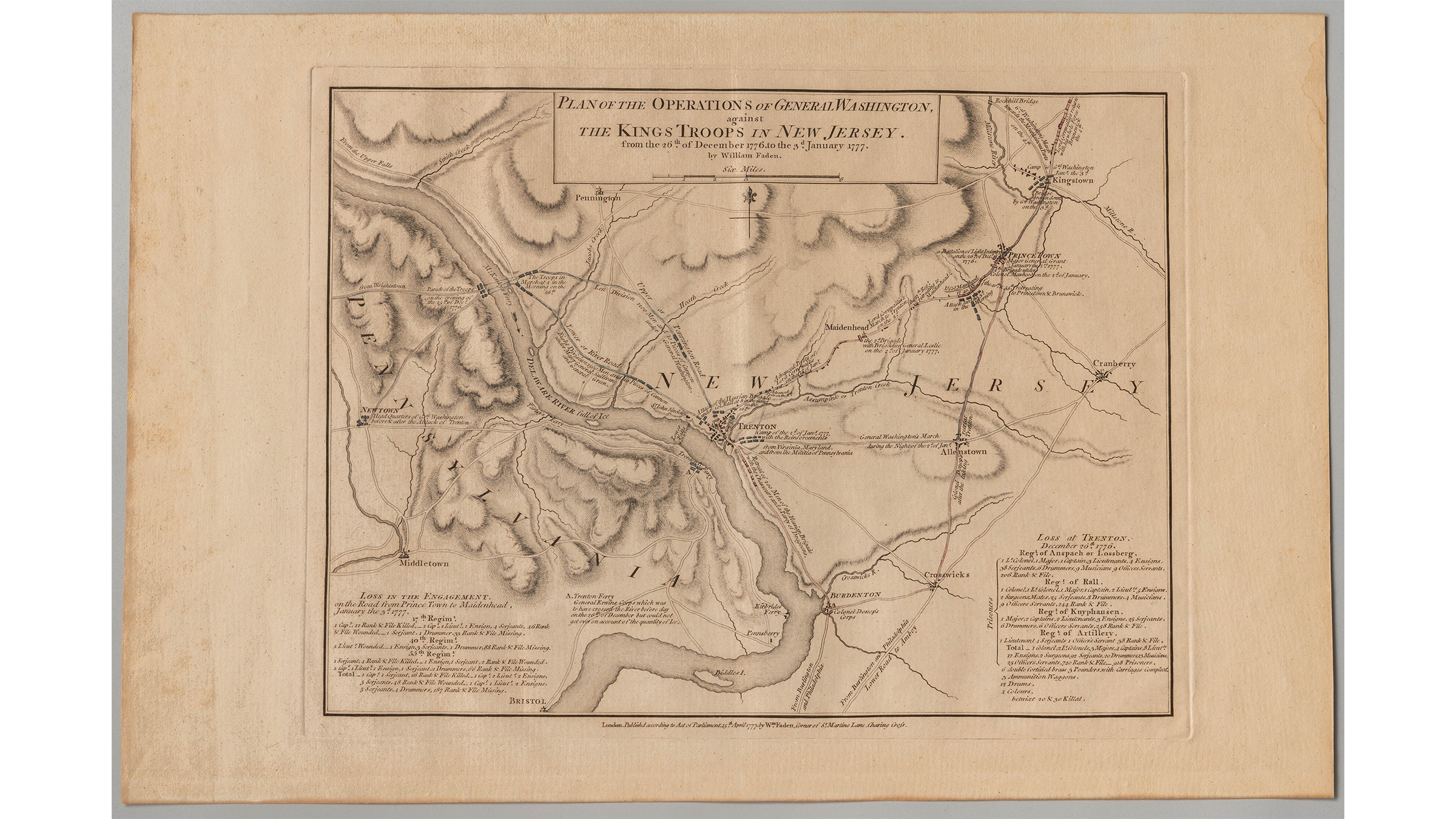 Museum of the American Revolution, Gift of Richard H. Brown

This British map documents the three battles, two at Trenton and one at Princeton, that took place during the 10 Crucial Days. General Washington’s army crossed the Delaware River three times and marched well over 35 miles in that period to emerge victorious from the campaign. Following the now famous Christmas-night crossing of the Delaware, Washington’s army marched nine miles to fight in the Battle of Trenton. What does Troiani’s painting of the march to Trenton suggest about the conditions that the soldiers endured on that march? 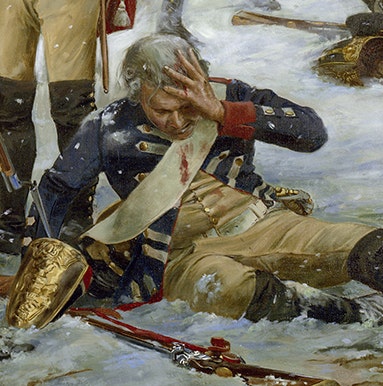 The three Hessian regiments under the command of Colonel Johann Rall struggled to mount a counterattack at the Battle of Trenton. Rall was mortally wounded as he led the Lossberg fusiliers (in coats trimmed with orange) and the grenadiers of his own regiment through the streets of the town. According to one of Rall’s grenadiers, “If the colonel had not been so seriously wounded, they would not have taken us alive ... in the end, all was lost.” About 900 Hessians surrendered to the Continental Army. Colonel Rall died of his wounds later that evening and was buried in the town. Can you find Colonel Rall and other wounded Hessians in Troiani’s painting of the Battle of Trenton? 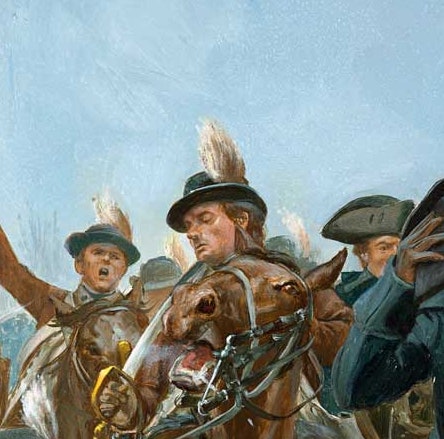 The 2nd Battalion Philadelphia Associators wore a buck tail in their hats to go along with their brown and red coats. The Philadelphia Associators painted their battalion number in Roman numerals on the flaps of their cartridge boxes. Painter Charles Willson Peale served as a lieutenant in this voluntary militia battalion, which fought at the Battle of Princeton. Can you find the Associators in Troiani’s painting of Princeton? 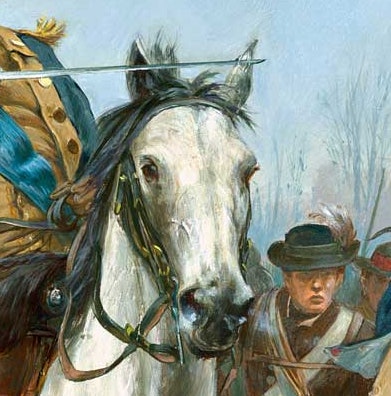 General George Washington charged across the fields of the Clarke family outside Princeton, New Jersey, on Jan. 3, 1777, to rally retreating troops from his army. Exposed to enemy musket fire, Washington led brown-coated Philadelphia Associators (volunteer militia) and Pennsylvania riflemen to drive the British from the battlefield. Count the horses in Troiani’s painting of the Battle of Princeton! The brass finial above once adorned the top of a wooden flagpole for a Hessian flag of the Revolutionary era. “FL” stands for Friedrich II, Landgrave of Hesse-Cassel. See if you can spot the finials in the Battle of Trenton painting! 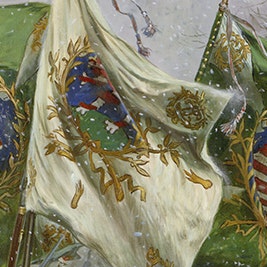 Also on display in the exhibit is a piece of silk that is among a handful of surviving fragments of the 15 Hessian flags that the Continental Army captured at the Battle of Trenton. It may have been cut from the black and white flag of the Fusilier Regiment von Knyphausen. Connecticut soldier Elisha Bostwick described one of the captured flags as being made of “the richest black silk” with “devices upon it & the lettering in gold leaf.” Notice the gold lettering on the Hessian flags in Troiani’s painting of the Battle of Trenton. 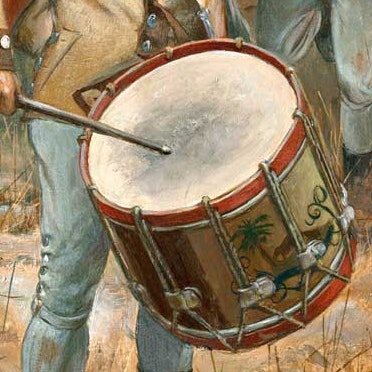 Drummers helped to communicate orders in battle, telling soldiers when to advance, retreat, and fire. Can you spot the three drums in Troiani’s paintings of the battles of Trenton and Princeton? Notice that the Hessians used drums made of brass. 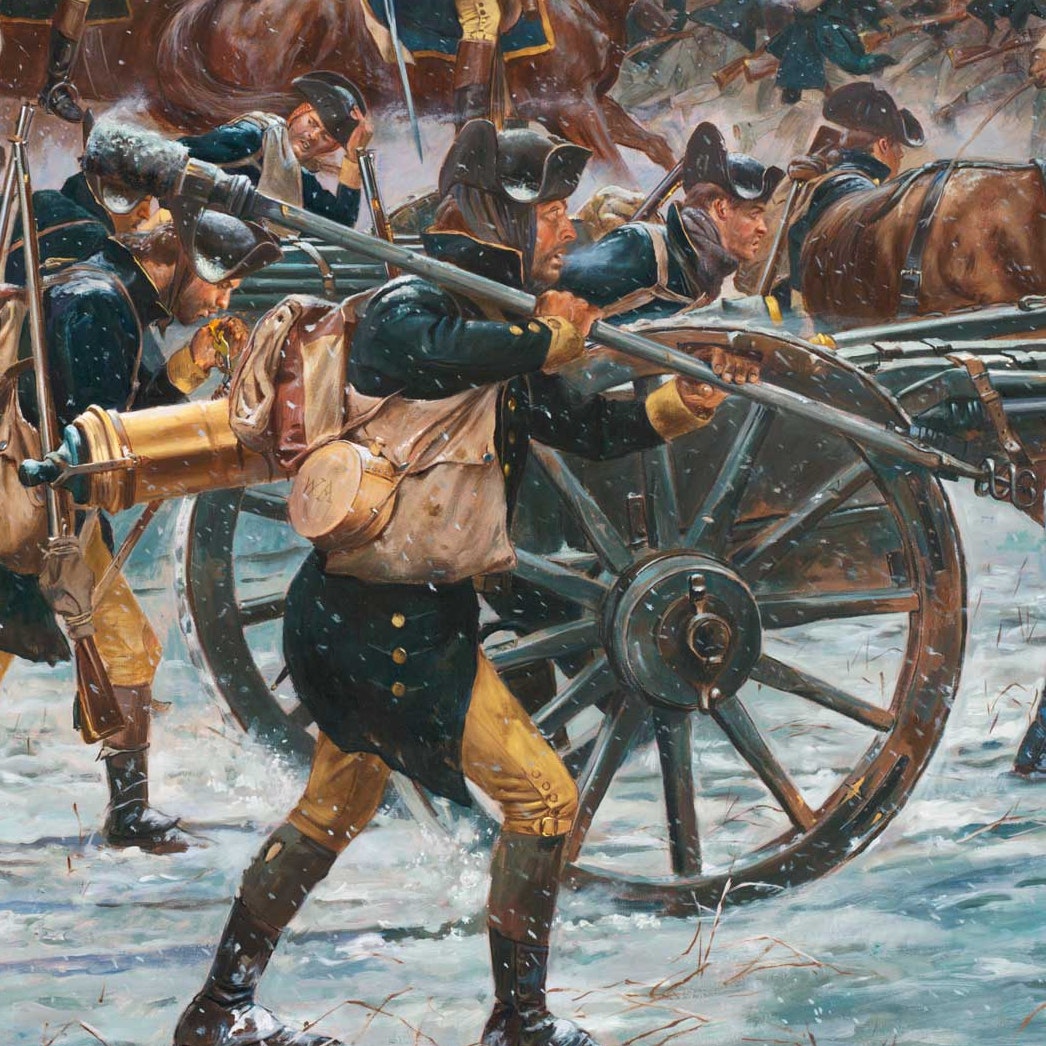 The two bronze six-pound cannons that Captain Alexander Hamilton commanded were among the 18 pieces of artillery that the Revolutionaries deployed against the Hessians at Trenton. The overwhelming fire of the artillery prevented the Hessians from mounting attacks, which helped to turn the tide of the battle in favor of the Americans. It wasn’t easy pulling the cannons through the snow on the march to Trenton! 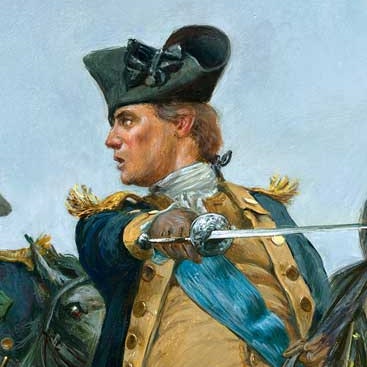 When Washington led a charge at the Battle of Princeton, some officers thought he might be killed for such bold leadership, but the General emerged from the battle unscathed. For those who witnessed the scene, Washington’s charge at Princeton was one of his most inspiring actions as Commander in Chief of the Continental Army. Washington can be identified by the blue silk ribbon across his chest, visible in the painting of the Battle of Princeton. Can also you find Washington in Troiani’s painting Victory or Death, Advance on Trenton? 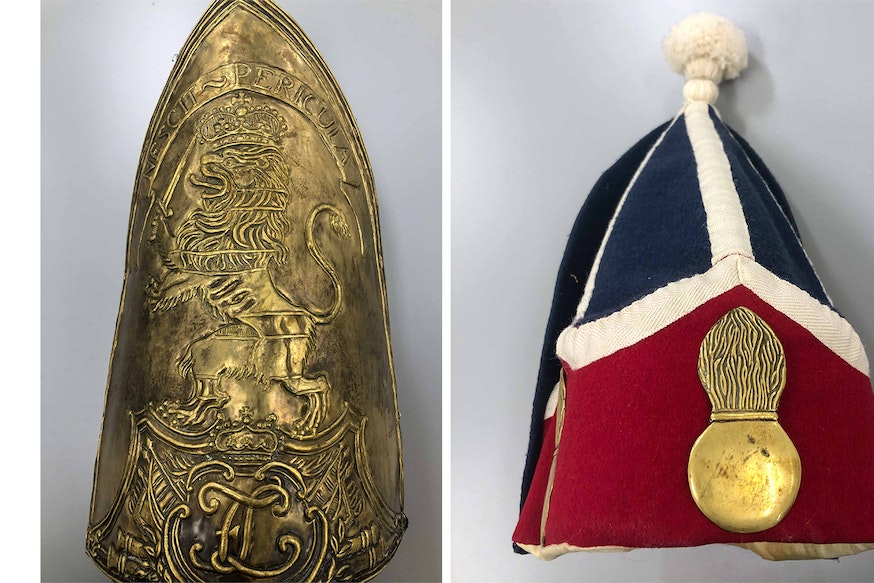 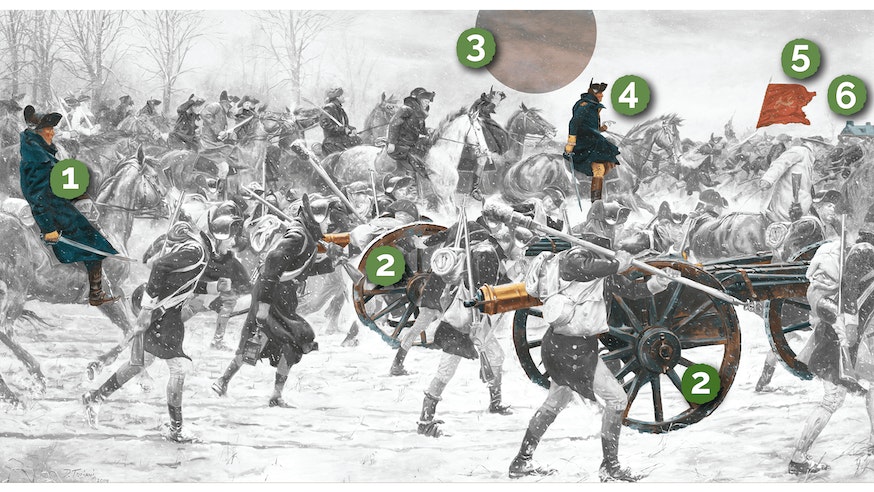