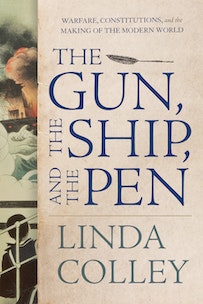 The Gun, the Ship, and the Pen: Warfare, Constitutions, and the Making of the Modern World by Linda Colley

Bringing to life the stories of lawmakers, committed rebels, and ambitious monarchs and generals, Linda Colley reshapes our understanding of the modern world through the evolution and spread of written constitutions. The story of Philadelphia’s Constitutional Convention in 1787 is only one of these stories, set on a global stage. In her new book The Gun, the Ship, and the Pen: Warfare, Constitutions, and the Making of the Modern World (Liveright, 2021), Colley traces the global history of written constitutions from the 1750s to the 20th century, modifying accepted narratives and uncovering the close and frequent connections between the making of constitutions and the making of war. Readers will meet American Revolutionaries like Thomas Paine, but also Catherine the Great of Russia, Muhammad al-Sādiq of Tunisia, Kalakāua of Hawaii, and travel to Corsica, Tunisia, France, Spain, and Japan. Colley shows how constitutions crossed continents, aiding the emergence of new nations and republics but also the rise of empires and monarchies.

Watch the Museum's archived video of historian Linda Colley's virtual discussion on her new book, The Gun, the Ship, and the Pen: Warfare, Constitutions, and the Making of the Modern World. See Content

It was in Istanbul that Kang Youwei witnessed the transformation at work. Sixty years old, a philosopher and a reformer, he had been exiled from his native China on account of his politics, and was persistently on the move. Crossing into the heartland of the Ottoman empire that summer in 1908, he found himself in the midst of turmoil. Rumours had been circulating of a Russian and British takeover of Macedonia, part of Sultan Abdülhamid II’s dominions. Viewing this as further proof of the inadequacies of their government, sections of the Ottoman army had rebelled. They wanted a parliament. Even more, they wanted a reinstatement of the empire’s first written constitution, which had been implemented in 1876, but then swiftly withdrawn. Kang Youwei arrived in Istanbul on 27 July, the day these army rebels succeeded in getting the constitution formally restored. Pushing his way through the crowds, cut off by language, but not from the excitement, he watched as ‘Half-moon flags hung, people drink, hit drums, sung songs together and danced. People were chanting long live, it did not stop day and night, streets, parks and everywhere were the same … it is astonishing.’ Writing later, he set down the essence of the rebel leaders’ ultimatum to the sultan: ‘They all bent down respectively and told [him] … “Every country has a constitution, only Turkey first declared and then abolished it, so people are not satisfied. The ideas of soldiers have changed.”’

This episode speaks to themes that are central to this book. There is the prominence of military men in this constitutional crisis. There is the fact that it was precipitated by threats and fears of foreign aggression; and there is the behaviour of Kang Youwei himself. Wanting constitutional change in China, he nonetheless saw it as essential to pay close attention as well to political experiments and ideas in other sectors of the world. ‘On the run for sixteen years’, proclaimed this man’s favourite personal seal: ‘circling the globe three times, traversing four continents.’ Like other activists who feature in these pages, though to an extreme degree, Youwei took it for granted that a viable political constitution could not be the introspective creation of a single polity. Learning and borrowing from others was indispensable, a position that by the early twentieth century had become the norm.

But it is his account of the arguments used by these military rebels to face down the Ottoman sultan that is most striking. As Youwei tells it, these men insisted that – even among the empire’s common soldiery – ‘ideas’ had ‘changed.’ They made a still more arresting assertion: that, by now –in 1908– ‘every country has a constitution.’ To an important degree, these claims were substantially correct. Since the mid eighteenth century, new written constitutions had spread at an increasing rate across countries and continents. This had worked to shape and re-forge multiple political and legal systems. It had also altered and disrupted patterns of thought, cultural practices and mass expectations.

Collections of rules of government were nothing new, of course, but went back a long way. Some city states in ancient Greece had enacted them in the seventh century BCE. Codes of written laws emerged in different societies earlier still. Slabs of stone inscribed with the code of Hammurabi, ruler of Mesopotamia in what is now the Middle East, survive from before 1750 BCE. But such ancient texts were generally the work of single authors and potentates. Most were far more concerned to set out rules of conduct for subjects, and fearsome penalties for defying them, than to establish curbs on those in authority or provide for individual rights. Moreover, most early codes and collections were not produced in large numbers or designed for a wide audience. Even when law codes and charters began to be set down on parchment and paper, and levels of print and literacy expanded in some regions of the world, acute limits on circulation persisted. In 1759, the English jurist William Blackstone would complain of the continuing lack of a ‘full and correct copy’ of King John’s Magna Carta, even though this was a celebrated charter and had emerged five centuries before.

Yet, as this outburst of impatience on Blackstone’s part suggests, by this stage, the situation was changing. From the 1750s, and in some particularly war-torn countries such as Sweden even before that, widely distributed iconic texts and single document constitutions aimed at constraining governments, and promising a variety of rights, became more numerous and more prominent. Thereafter, such documents proliferated exponentially and in connected waves across multiple frontiers. The quantum surge in the number of constitutions that followed the First World War, and still more the Second World War, lay in the future. Nonetheless, by 1914, devices of this sort were operating in parts of every continent barring Antarctica. In addition, and as emerges from Kang Youwei’s account of the Young Turk revolution in Istanbul, a written constitution had come to be widely regarded as a trademark of a modern state and of the state of being modern. This book investigates these global transformations, and it connects them to shifting patterns of war and violence.

It follows that paying close attention to the provisions and wording of different constitutions drafted across time and in multiple places is vital, because it is only by doing so that we can uncover, identify and unpick the many and various visions and ideas that were involved. Consequently, this book draws heavily throughout on the texts of multifarious constitutions that were written originally in many different languages, and that derive from locations in six continents. I have also been concerned to look at the ideas, personalities and actions of some of the writers and activists involved, those men (and before 1914, it mainly though not invariably was men) who, as well as being often preoccupied with violence, the gun and the ship, also made studied use of the pen.

Since constitution-making was so interwoven with war and violence, these writers and thinkers are not necessarily those whom you might expect. Monarchs, politicians, lawyers and political theorists figure regularly in this book, to be sure. But so, too, do military, naval and imperial officers, along with one-time slaves, bankers, clergymen, medical doctors, intellectuals, journalists, and cultural figures of all kinds. Since my intention is to track and analyse changing attitudes and strategies over time and geographical space, I look not just at official and successful makers of constitutions, but also at some of the many private actors who attempted documents of this sort, out of anxiety, in the hope of advancing particular political, intellectual and social agendas, or because they were simply addicted to writing and to the written word.

I stress this point because constitutions are often compartmentalised: treated as a category that is separate and distinct from other modes of literature and creativity. Yet many of the constitution - drafters, thinkers and advocates who figure in this book were engaged as well in other literary and cultural activities, from Catherine the Great of Russia, through Rammohan Roy of Calcutta, to Andrés Bello of Venezuela and Chile, to Itō Hirobumi in Japan, to Pomare II of Tahiti and Africanus Horton from Sierra Leone. Kang Youwei himself, with whom we began, was fascinated by and adept at the art of calligraphy, as well as being a student and would-be writer of constitutions.

It was not a coincidence moreover that this same post-1750 period, which saw the critical advance in the invention and take-up of written constitutions under heightened pressures of war and imperial violence, also witnessed an accelerating spread in large parts of the world in levels of literacy, an explosion in print and its transmission, a massive increase in the number and locations of newspapers, the invention of myriad new written languages, a greater frequency in the issue of translations, and – too – the rising popularity of the novel. A constitution, after all, like a novel, invents and tells the story of a place and a people. These documents were – and are – always more than themselves, and more too than a matter of law and politics. They stand in need of reappraisal and rediscovery, and of being read across boundaries. 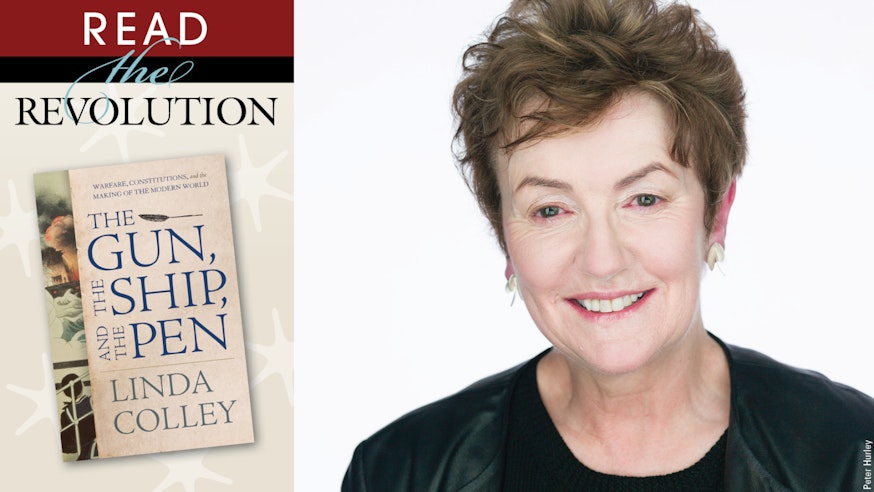 Watch the Museum's archived video of historian Linda Colley's virtual discussion on her new book, The Gun, the Ship, and the Pen: Warfare, Constitutions, and the Making of the Modern World.
Read More