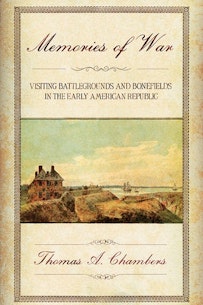 Memories of War: Visiting Battlegrounds and Bonefields in the Early American Republic by Thomas Chambers

Imagine what it would have been like to tour a Revolutionary War battlefield with a soldier who actually fought there. How did Americans remember their first battles when participants were still alive to tell the tale? In his book Memories of War: Visiting Battlegrounds and Bonefields in the Early American Republic, historian Thomas A. Chambers explores how people visited and commemorated battlefields between independence and the Civil War. Battlefields have always attracted curious Americans. Even during the Revolutionary War itself, people were exploring older scenes of fighting, like Braddock’s Field and other sites of combat from the Seven Years’ War in Pennsylvania and New York. In the new nation, they became key stops for regional and international tourists, including on the Marquis de Lafayette’s famous tour in 1824-1825. These visitors collected relics, joined organizations to build monuments, and traveled to see the places they felt were imbued with powerful memories. By walking on these battlefields, sometimes even guided by veterans, new Americans become a part of the story of these places.

Look back at a few of the Museum's virtual tributes for Memorial Day to the men and women who lost their lives in service to their country during the Revolutionary War, including a presentation about memorial objects, a make-your-own commemorative ribbon, and an exploration of the Tomb of the Unknown Revolutionary War Soldier, just two blocks away from the Museum in Philadelphia. And in this excerpt from Memories of War, walk the battlefield of Saratoga, New York, with one of its last living veterans.

Benjamin Silliman hired Ezra Buel, a seventy-five-year-old veteran and Saratoga resident since before the war, to guide him around the battlefield in 1819. Buel had provided similar assistance to the American army in 1777, frequently ‘in the post of danger; and he was therefore, admirable qualified for my purpose.’ The two men scrambled over fences, fallen logs, and stone walls, crashed through bogs, thickets, and ravines, and clambered up and down hills. ‘In short, though many places where I alone would not have ventured; but it would have been shameful for me not to follow where a many of seventy-five would lead, and to reluctate at going, in peace, over ground which the defenders of our country and their foes once trod in steps of blood.’ Two years later the attorney and politician William Wirt also toured the Saratoga battlefield with a still-vigorous Buel – ‘his usual gait of riding it twelve miles per hour on a very hard riding horse.’ Buel had just finished guiding ‘another traveler’ around the battlefield, but ‘not at all fatigued with the excursion from which he had just returned, [Buel] wheeled about again and accompanied us with the most alacrity.’ As another traveler noted, ‘the Old Gentleman’s face beamed and eyes sparkled with pleasure,’ as he showed his guests around the battlefield. Retracing the steps of battle with one who had been there ‘enabled me to imagine at times that I saw and heard all the tumult, agitation, shouting, thunder and fury of a long and well-contested field.’

When, on the Saratoga battlefield with Silliman, Buel ‘bared his aged breast, and shewed me where a bullet had raked along, superficially cutting the outer integuments of the thorax, and carrying with it into the wound portions of his clothes,’ Silliman had come as close to witnessing the Revolution as one could without travelling back through time to smell the powder burn and hear the balls whistle. Buel provided a walking monument the complemented the romantic past of decaying ruins and bucolic scenery. Encountering the past in the person of this old soldier enabled Silliman to reenact the history he had only read about in memoirs or guidebooks. He gained a personal understanding of what most knew as a mythic event. Tour guides like Buel offered personal interaction, anecdotes, and individual memories that imbued a battlefield visit with more meaning than any guidebook could transmit. They provided another prompt to sentiment and melancholy, as well as an individual link to the noble struggle of the Revolution.