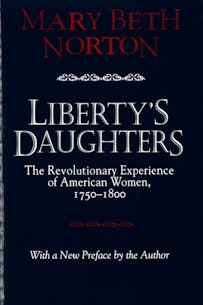 The campaign began on June 10, 1780, with the publication of a broadside, The Sentiments of an American Woman. The broadside was composed by the thirty-three-year-old Esther DeBerdt Reed, who was to become president of the Ladies Association. The daughter of a prominent English supporter of America, Esther had lived in Pennsylvania only since her 1770 marriage to Joseph Reed, but she was nonetheless a staunch patriot. Her Sentiments asserted forcefully that American women were determined to do more than offer 'barren wishes' for the success of the army: they wanted to be 'really useful,' like 'those heroines of antiquity, who have rendered their sex illustrious.' Recognizing that in proposing an active political role for women she was challenging the boundaries of the feminine sphere, Mrs. Reed built her case carefully.

She began by reviewing the history of women's patriotic activity, referring to female monarchs, Roman matrons, and Old Testament women. Linking herself explicitly to such foremothers, she declared, 'I glory in all which my sex has done great and commendable. I call to mind with enthusiasm and with admiration, all those acts of courage, of constancy and patriotism, which history has transmitted to us.' Mrs. Reed especially held up Joan of Arc as an appropriate model, for she had driven from France 'the ancestors of these same British, whose odious yoke we have just shaken off, and whom it is necessary that we drive from this Continent.'

Esther Reed then addressed the question of propriety. Some men might perhaps 'disapprove' women's activity, she admitted. But in the current dismal state of affairs anyone who raised this objection would not be 'a good citizen.' Any man who truly understood the soldiers' needs, she wrote, could only 'applaud our efforts for the relief of the armies which defend our lives, our possessions, our liberty.' By thus hinting that critics of her scheme would be unpatriotic, Mrs. Reed cleverly defused possible traditionalist objections even before they could be advanced.

Finally, she outlined her plan. Recalling the contributions women had made to the nonimportation and home manufacture movements, Esther Reed recommended that female Americans renounce 'vain ornaments,' donating the money they would no longer spend on extravagant clothing and elaborate hairstyles to the patriot troops as 'the offering of the Ladies.'

Her appeal drew an immediate response. Three days after the publication of the broadside, thirty-six Philadelphia women met to decide how to implement its suggestions. The results of their deliberations were printed as an appendix to Sentiments when it appeared in the June 21 issue of the Pennsylvania Gazette. Entitled 'Ideas, relative to the manner of forwarding to the American Soldiers, the Presents of the American Women,' the plan proposed the mobilization of the entire female population. Contributions would be accepted from any woman, in any amount. Ultimately, all contributions would be sent to Martha Washington to be used for the benefit of the troops. Only one restriction was placed on the employment of the contributions: 'It is an extraordinary bounty intended to render the condition of the soldier more pleasant, and not to hold place of the things which they ought to receive from the Congress, or from the States.'

The Philadelphians set to work collecting funds even before the publication of their 'Ideas.' Dividing the city into ten equal districts, they assigned between two and five of their number to each area. Traveling in pairs, the canvassers visited every house, requesting contributions from 'each woman and girl without any distinction.' Among the collectors in the fifth ward, Market to Chestnut Streets, were Sarah Franklin Bache and Anne Willing (Mrs. Tench) Francis, sister of Elizabeth Wiling Powel; Julia Stockton (Mrs. Benjamin) Rush worked in district six; and in the eighth ward, Spruce to Pine Streets, the canvassers included Alice Lee Shippen, Mrs. Robert Morris, and Sally McKean, wife of the Pennsylvania chief justice. The fact that women of such social standing undertook the very unfeminine task of soliciting contributions not only from friends and neighbors but also also from strangers, poor people, and servants supports the contention of one of the Philadelphians that they 'considered it as a great honour' to be invited to serve as canvassers...

Accounts of the women's reception differ. [An] anonymous letter writer claimed that 'as the cause of their visit was known, they were received with all the respect due to so honourable a commission.' She explained that no house was omitted, not even those inhabited by Quakers, and that even there the subscription met with success, for 'nothing is more easy than to reconcile a beneficient scheme with a beneficient religion.' But Anna Rawle's description of the canvassing of Quaker homes painted a different picture. 'Of all the absurdities the Ladies going about for money exceeded everything,' she told her mother, Rebecca Shoemaker, whose second husband, Samuel, was a loyalist exile. Sarah Bache had come to their door, Anna reported, but had turned away, saying that 'she did not chuse to face Mrs. S. or her daughters.' Anna characterized the collectors as 'so extremely importunate that people were obliged to give them something to get rid of them.' Even 'the meanest ale house' did not escape their net, and men were harassed until they contributed in the name of their wives or sweethearts. 'I fancy they raised a considerable sum by this extorted contribution,' Anna concluded, but in her opinion the requests were carried to such an excess of meanness as the nobleness of no cause whatsoever could excuse.'

Whether the letter writer's examples of women proudly and voluntarily giving to the cause or Anna Rawle's account of reluctant contributors is more accurate is impossible to determine. But by the time the Philadelphia canvass was completed in early July, more than $300,000 continental dollars had been collected from over 1600 persons... In financial terms, the city canvass was a smashing success.