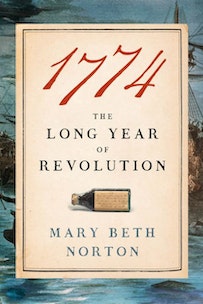 1774: The Long Year of Revolution by Mary Beth Norton

Purchase the book from the publisher, Penguin Random House.

What difference did 365 days make in the midst of the American Revolution? Years and eras, movements and moments: how do historians use primary sources to determine start times and stopping points for analyzing change over time? In 1774: The Long Year of Revolution, Dr. Mary Beth Norton, the Mary Donlon Alger Professor Emerita of American History at Cornell University, expands her focus from 12 months to 16 months to argue for “the long 1774,” identifying when loyalists to King George III started to form conflicting opinions that led to their accepting the inevitability of war against the British Empire and to the clashes at Lexington and Concord, Massachusetts, in April 1775.

In the Museum’s galleries, we distinguish between the Revolutionary era (1760-1800), the Revolutionary War (1775-1783), and the ongoing American Revolution, an evolving idea and influencer of events throughout American and world history. We interpret the Revolution as a series of predicaments: real events that happened to real people who did not know the outcomes or what the future would hold.

In 1774, Norton turns back the clock to 1773 in order to trace how British loyalists living in the American colonies changed their minds about the nature of society and government. By early 1775, governors throughout the colonies informed colonial officials in London that they were unable to thwart the increasing power of the committees and their allied provincial congresses.

Learn Norton’s scholarly motivation to define “the long 1774”, introducing the book’s organization and goals to present political discourse surrounding events as they happened, in real time.

How did people become Revolutionaries? Discover how the American Colonists – most of them content and even proud British subjects – became Revolutionaries as the roots of rebellion took hold. See Content

In 1774, the phenomenon known as loyalism first appeared, as did the term “Loyalist.” The emergence of people who called themselves Loyalists signaled an important change in the colonial political climate, for their presence implied the existence of the opposite phenomenon: people who were openly disloyal. Before 1774, most politically aware Americans were united in criticizing policies about colonial taxation and governance that Parliament adopted after the end of the Seven Years’ War in 1763. Conservatives and radicals debated methods of resistance, but well into the 1770s free colonists uniformly identified themselves as loyal subjects of King George III and gloried in their membership to the British Empire. For revolution to occur, that identification as loyal Britons had to change: some men and women had to start thinking differently about America’s relationship with empire, while others persisted in retaining their traditional loyalty to the Crown. I have come to term the period of dramatic change “the long 1774”—that is, the sixteen months between December 1773 and mid-April 1775. The unprecedented events that occurred in the English colonies in North America during those months are the subject of this book.

Almost all historians who study the Revolution as a whole have focused on the revolutionaries— the men who led resistance to Great Britain starting in the mid-1760s. For such scholars, developments in 1774 appear to be of a piece with previous occurrences. The Stamp Act riots of 1765, opposition to the Townshend Acts in 1767-1770, the Boston Massacre of 1770, the Gaspee incident of 1772: all seem to lead inexorably, if not almost inevitably, to the revolutionary war that followed. When historians have concentrated on events preceding the outbreak of fighting, they have devoted considerably more attention to Massachusetts than to the rest of eastern North America.

Yet a focus on those who remained loyal to the empire points up the significance of events in 1774 throughout the colonies, not just in Massachusetts. The evolving tactics pursued by colonial opponents of British policies began to cause new divisions in popular opinion, everywhere leading to increasing political polarization. Still, almost all scholars who have studied the Loyalists have confined their attention specifically to that subject, rather than venturing to approach the wider topic of the Revolution as a whole from the perspective of their previous work on those loyal to the Crown.

This book, by contrast, has been shaped by my long-standing interest in the Loyalists. Rather than viewing the months between December 1773 and April 1775 with the common implicit or explicit assumption that resistance leaders commanded a people largely unified around a radical agenda, it reveals many debates, disagreements, and disruptions that characterized the period in all the colonies, from New Hampshire south to Georgia. Instead of privileging the viewpoints of men like Samuel Adams and focusing almost exclusively on his province of Massachusetts, it gives voice to such moderate colonists as Joseph Reed and John Dickinson of Pennsylvania and details the disputes that rolled New York throughout the year. It pays attention to the opinions of colonial officials and others who sent regular reports to London about political circumstances in their colonies. It also analyzes the writings of the Loyalist pamphleteers, who first published their vehement dissents while the Continental Congress was in session in September, and examines how more radical authors responded to Loyalists’ arguments.

I aim, in short, to include the views of all of those who participated in formal political discourse in the colonies in 1774, regardless of their gender, race, or place of residence. I sought evidence in a variety of libraries, from the National Archives of the United Kingdom to the Huntington Library in San Marino, California, and many universities and state historical societies. The narrative has been constructed from the published and unpublished correspondence of political leaders and ordinary folk alike; from pamphlets and broadsides; from the official records of colonial governments and their revolutionary successors; and from newspapers with reports of local meetings and other activities, along with essays expressing a wide range of opinions. Because of the emphasis on formal political discourse, it devotes less attention to those who are often termed “the people out of doors,” although it does not exclude them entirely from consideration. As will be seen in the following pages, people who did not leave written records of their opinions nevertheless revealed their ideas through their actions.

This book’s basic narrative is perhaps deceptively familiar. It begins in October 1773, when seven ships carrying East India Company (EIC) tea sailed from Great Britain to North America under the terms of the recently adopted Tea Act, which for the first time allowed the EIC to sell its tea directly to colonists. Five arrived in the ports of Boston, Charles, and Philadelphia in December, while another wrecked on Cape Cod. The other vessel, blown far off course by an Atlantic gale, did not reach New York until April after spending the winter in Antigua. In Charleston, customs officers seized and stored the tea; in Philadelphia and New York, the ships were not allowed to enter the harbor; and in Boston, famously, men crudely disguised as Indians destroyed the tea. Subsequently, colonists had to await Britain’s reaction to the fate of the ships. News of that reaction first arrived in mid-Mary, with further details trickling in over the next few months. Americans learned that Parliament had closed the port of Boston until the tea was paid for, then followed up with a series of punitive laws known as the Coercive Acts.

During the summer of 1774, Americans everywhere discussed the appropriate response to such parliamentary measures, leading to the convening of the (First) Continental Congress in September. Before adjourning in late October, the congressmen adopted resolutions on the controversy and, more important, called for the creation of a series of local committees to enforce a trade boycott of Great Britain. Throughout the rest of the year, the committees worked to establish their legitimacy and, in conjunction with newly elected provincial congresses, began to challenge the authority of the existing colonial governments. By the first months of 1775, many people were expressing the belief that war would begin in the spring, and those predictions proved correct when clashes occurred at Lexington and Concord in mid-April.

That story is well known to historians. The debates and disagreements that lay behind it have commonly been ignored, with the partial exception of some local and state-level studies.

Ordinary people did not always act in accordance with the wishes of their nominal leaders, sometimes pursuing more radical actions, sometimes rejecting what seemed to be the verities of the resistance movement, such as boycotting EIC tea.

In short, the standard narrative of events that focuses solely or primarily on revolutionary leaders, especially those in Massachusetts, and their opinions and publications omits or elides many key aspects of what happened during “the long 1774.” Americans today tend to look back on the politics of those days and see unity in support of revolution. That vision is false. The population was divided politically then, as now.