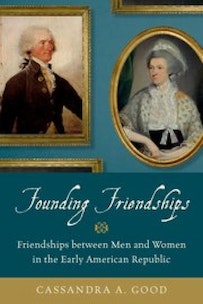 Founding Friendships: Friendships Between Men and Women in the Early American Republic by Cassandra Good

The American Revolution ushered in a period of increased political importance for elite women, spurred in part by valued friendships between men and women. Women gained political access, influence, and information through their male friends in political office. This adapted essay from Cassandra Good's Founding Friendships: Friendships Between Men and Women in the Early American Republic shows how crucial these friendships were as a channel for women to be informed and have their voices heard.

The American Revolution not only ushered in a new political system but also spurred changes in the roles of and expectations for men and women. The American and French revolutions inspired people on both sides of the Atlantic to experiment with new forms of relationships and even new ways of feeling. Intimate relationships were seen as key to the success of new political arrangements. The formation of a republic ruled by the people rather than a king meant that the bonds that held the polity together were vital; only through social ties would a body of people scattered across thirteen colonies connect as a political whole. Friendship, marriage, and family would knit together the body politic in the early decades of the young republic.

Male leaders often recognized their female friends as political beings who sought the best interest of the new nation. George Washington told Annis Boudinot Stockton in 1788 that women had helped America win the Revolution and that "you Ladies are in the number of the best Patriots America can boast." In 1775 John Adams wrote that "I have ever been convinced that Politicks and War, have in every age, been influenced, and in many, guided and controuled [sic]" by women. The next year, Adams wrote to James Warren's wife Mercy Otis Warren of his hopes for a new republican government. At the beginning of the letter, he declared that "the Ladies I think are the greatest Politicians," but tempered his language by stating that his letter was "a very grave and solemn Discourse to a Lady." He continued, "True, and I thank God, that his Providence has made me Acquainted with two Ladies at least, who can bear it." Perhaps not all women could engage in politics, but many men certainly believed their wives and friends could.

Mercy Otis Warren explained that private conversation between friends was precisely how women could share political opinions and influence. In 1774 she wrote: I disregard the opinion that women make but indifferent politicians... When the observations are just and do honor to the heart and character, I think it very immaterial whether they flow from a female lip in the soft whispers of private friendship or whether thundered in the senate in the bolder language of the other sex.

Women shared their observations in the only way society allowed at the time: in quiet conversation rather than public speeches. The ability to do so required a level of access to male leaders only available to personal friends. Friendship, rather than an open public forum, was a space for politics. Implicit, too, in her statement is that observations were not mere chatter; they could influence broader political opinion and effect change.

Warren certainly spoke from experience. Her friend John Adams valued her political insights. Indeed, before leaving for the First Continental Congress in Philadelphia in June 1774, he wrote James Warren to request "the Favour of your Sentiments and Mrs. Warrens what is proper, praticable expedient, wise, just, good necessary to be done at Phyladelphia [sic]." Adams again praised the political judgment of Mercy Otis Warren, as well as his wife, Abigail, admitting that "I suspect they understand it [politics] better than we do." The Warrens wrote back separately but on the same sheet, with James providing specific advice and Mercy suggesting "that a preparatory Conference should be held" for her to share her opinions. It is unsurprising, then, that she would comment on the political value of "the soft whispers of private friendship" later that same year.

Women also valued access to political news obtained through their male friends in political office. This was a central aspect of the friendship between Abigail Adams and James Lovell while John Adams was abroad during the American Revolution. Lovell, in his position in the Continental Congress, could supply inside information to Abigail Adams on politics and the Congress' plans for her husband. While in America, John Adams had "always indulged" her in sending along political news, but during his time in Europe, she needed Lovell to keep her up to date on "any important and interesting matters which may take place." She asked Lovell: "Am I entitled to the journals of Congress[?], if you think so I should be much obliged to you if you would convey them to me." It appears that it was a special favor for women to receive such information, making friends who did supply it — like Lovell — particularly valuable.

Around the same time, Catherine "Kitty" Livingston learned the latest developments from the battlefield from her friend Alexander Hamilton. Hamilton, who had been friends with the Livingston family of New Jersey for many years, wrote Livingston a playfully flirtatious letter from the encampment of the Continental Army in Morristown in April 1777. He had heard from her sister Susan that Kitty Livingston had "a relish for politics" and thus Susan "wishes me to engage on the footing of a political correspondent." He would write her about politics, he said, but he would also "make excursions in the flowery walks, and roseate bowers of Cupid." Whether this was a serious romantic gesture or not, Livingston appears to have rebuffed it while continuing to press Hamilton for updates on the war. Since she and her family had moved several times to avoid fighting, such updates were a matter of great importance to her and he was a useful friend to have. She was surely pleased to hear from him the next month that some believed the British would soon leave New Jersey.