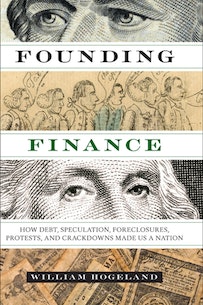 Founding Finance: How Debt, Speculation, Foreclosures, Protests, and Crackdowns Made Us a Nation by William Hogeland

Purchase the book from University of Texas Press.

The possession of Money will acquire influence. Influence will lead to Authority, and authority will open the Purses of the People.

The First Bank of the United States, hub of the comprehensive system of national finance, was created by the first U.S. Treasury secretary, Alexander Hamilton, which he developed from the ideas of his mentor, Philadelphia merchant Robert Morris. It was chartered by Congress in 1791 for 20 years as the country’s first national financial institution. The First Bank building, completed in 1797, is located directly across Third Street from the Museum.

In Founding Finance: How Debt, Speculation, Foreclosures, Protests, and Crackdowns Made Us a Nation, William Hogeland presents the people and economics behind a financial system that combined funding the public war debt on a long-term basis via national taxation with growing and consolidating the debt by assuming the states’ debts in the national obligation. The First Bank was that system’s hub, and while it withstood two threatened crashes during Hamilton’s tenure, his opponents Thomas Jefferson and James Madison excoriated its existence as unconstitutional. In 1801, when Jefferson and Madison came to power, the new agenda was to dismantle Hamilton’s entire system. How has it evolved since?

Read an excerpt from Chapter 4: Conceived in War Debt (1776-1783), in which Hogeland introduces the viewpoints of Morris and Hamilton.

Watch William Hogeland's October 2022 lecture, Hamilton's Hub: The First Bank of the U.S. in the Creation of the American Economy. Watch

By 1781, the British seemed to be winning the war. Washington’s army was a disaster. Both the military and the financial position of the country seemed on the verge of collapse. State legislatures stopped collecting or even imposing taxes for requisitions to Congress. The economy was crashing.

The Congress called again on Morris. He had money and expertise, and he had ideas for stabilizing the Congress’s finances. One of those ideas amounted to a central bank. The Bank of North America, as he wanted to call it, wasn’t intended to operate like a “land bank,” that populist tradition in which a legislature issued small, easy-term loans to ordinary freeholders, with land as collateral. Morris’s bank would be privately financed, with Morris and his friends, including his business partner Willing, serving at once as subscribers and as the governing board. Yet it would operate as a public corporation, publicly chartered both by Pennsylvania and by the Congress.

The charter would make board members immune from personal lawsuits. They could use the bank’s capital for investments they deemed interesting. The bank would meanwhile lend to the Congress and manage its finances.

So the Congress made Robert Morris its superintendent of finance. He began restructuring the body on the understanding that he would have a free hand, with no more quibbles about mingling public finance with his own. Committees became executive departments, headed by men reporting directly to Morris, not only Finance but also Foreign Affairs and War. Morris and General Washington have often been paired, the two most powerful Americans during the Revolution. Yet it may be fair to say, as Morris apologists always have, that by 1783, when America achieved victory, it was Robert Morris as much as George Washington who had kept the Continental Army in the field. The richest man in America, our first central banker, controlled the Congress.

Get biweekly Read the Revolution featured excerpts sent right to your inbox.

Here Alexander Hamilton makes his entrance to the story of founding finance, in which he would play such a famous and decisive role. Hamilton was young compared to many of the other famous actors. He came to New York from the Caribbean island Nevis, where he was raised in destitute circumstances; he lacked the period of subsistence within the colonial-imperial system in North America that marked the lives of so many of his famous contemporaries. He was forward-looking, improvisatory, a voracious quick study. Intensely ambitious, yet charming, fluid, and socially adept, he made an attractive up-and-comer. He studied at Columbia and wrote in favor of American rights, then entered the war with excitement, hoping for military glory. He was quickly assigned to General Washington’s staff and made himself its de facto chief.

During his time on the staff, he married Betsey Schuyler, daughter of Washington’s friend and comrade Philip Schuyler, a leader of New York high society. Then he distinguished himself in the field, at the last minute, leading a bayonet charge at the Battle of Yorktown, where American victory signaled the end of the war. He was fully arrived.

Hamilton came to the Congress in 1782, almost straight from the Continental Army, and made himself indispensable, as was his practice, to the most powerful man in the room. He and Morris had been communicating even earlier; Hamilton’s main interest, besides military adventure, was public finance. He’d been reading Hume and the economist Jacques Necker and others, and he’d written Morris a letter, offering what he called some ideas, which in fact ran to thirty pages of figures and argument on banking technique. Hamilton’s sense of finance was already sophisticated. His letter counseled Morris to issue smaller, more generally usable bills, and he pushed for larger capitalization than Morris had originally deemed prudent.

When Hamilton took his seat in the State House in Philadelphia, Robert Morris was facing some big problems. In helping his mentor address them, Hamilton became for the first time a political actor at the highest levels of government. He took part in a climactic series of events that combined and integrated his favorite things, high finance and military hierarchy, in the quest for great nationhood.

Morris enlisted the young Hamilton in a project to get the whole country focused on what Morris had come to see as its unifying basis: paying interest to the federal bondholding class. The obstacle to that project lay in the attitudes and capabilities of the state governments. Even governments not so radically egalitarian as Pennsylvania’s were subject to traditional pressure and noncompliance from their under-enfranchised citizens. And the governing elites in some states — little Rhode Island most notably — objected in any event, and on general high-Whig principles of liberty, to the degree of centralized control by the Congress that Morris’s public finance plans tried to force the states to submit to.

By 1782, Morris was pushing the states as hard as he could to pay their war requisitions. States were resisting, so he suspended army pay. He controlled the funding of the Continental Army, and he prohibited legislatures, too, from paying their own soldiers. States must send all required money to the Congress. The Congress must distribute the money as Morris deemed proper. One of the chief things Morris deemed proper was to sustain the interstate bondholders by paying their interest.

This premium that Morris began placing on enriching the high financiers over salarying the Revolutionary soldiers challenges his apologists’ contention that their man was dedicated above all things, and at high cost to himself, to financing army supply. His decisions outrage others today, as they outraged many at the time, who see Morris’s activities as nothing but brutally self-interested. Yet while he was personally interested, I believe, in virtually every transaction he ever undertook, Morris’s ambitions during the war may best be understood in the light of his desire not only to achieve victory but also, at least as important, to unify the country as a nation. Lately many people, of varying political leanings, have adopted Hamilton as their favorite founder, the guiding spirit of responsible public finance. As we’ll see, in the 1790s, Hamiltonian finance brought to fruition Morris’s embattled plans of the 1780s. Writing off Morris as nothing but a money-grubbing profiteer would mean writing off Hamilton that way too.

Those today who abhor Hamilton would be happy to caricature him as a hypocritical greed-head obsessed with money and status. What, then, of James Madison? He’d come to the Congress two years before Hamilton, and the two young delegates formed a friendship based on their shared desire to strengthen federal power. Madison defended Robert Morris from accusations by Madison’s fellow Virginians that the financier’s programs had corrupt and tyrannical goals.

Madison’s relationship to the Morris crew was complicated. In some ways, nobody was a more committed nationalist than Madison; in the confederation Congress he gave every effort to carrying out the Morris plan. Yet he seems never to have adopted the overarching goal of anchoring powerful nationhood in debt. Where some historians associate him with Morris’s programs, others note that as a traditional Virginian, Madison felt intuitive horror at the prospect of public debt and central banking. He opposed the Congress’s chartering a bank; he said it had no explicit power to do so. He nevertheless sought implicit powers in the Congress’s Articles of Confederation to carry out other Morris projects.

In any event, Madison didn’t see Morris in the negative way of many of his contemporaries. There are contradictions between Hamilton’s and Madison’s shared ambitions for the United States and many people’s ambitions for it today.

William Hogeland, Founding Finance: How Debt, Speculation, Foreclosures, Protests, and Crackdowns Made Us a Nation (University of Texas Press, 2012), 80-83. 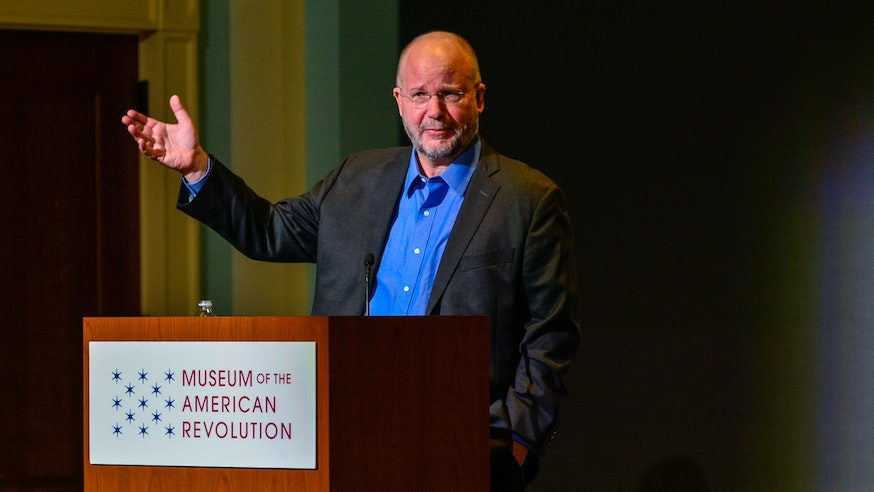 Watch William Hogeland's October 2022 lecture, Hamilton's Hub: The First Bank of the U.S. in the Creation of the American Economy.
Read More 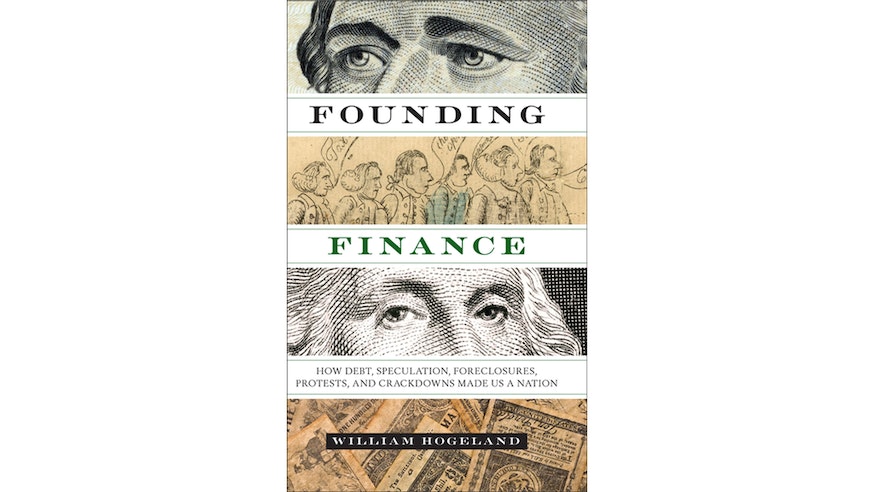 Read an excerpt from William Hogeland's book, Founding Finance: How Debt, Speculation, Foreclosures, Protests, and Crackdowns Made Us a Nation.
Read More