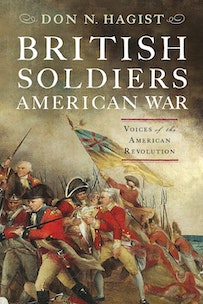 Caught in the midst of loading his musket at the Battle of Long Island in August 1776, Private William Burke of the British Army’s 45th Regiment of Foot is the subject of one of the Museum of the American Revolution’s life-sized figure tableaux. Such dramatic scenes help to bring the people of the American Revolution to life in the museum’s core exhibition. Burke’s personal memory of fighting in America as a young man, which inspired the tableau, and his eventual desertion from the army is one of nine stories featured in this week’s Read the Revolution book, Don Hagist’s British Soldiers, American War: Voices of the American Revolution.

Narrative accounts of military service during the Revolutionary War written by enlisted men of the British Army are scarce. In British Soldiers, American War, Hagist compiled narratives of nine such soldiers and added contextual essays to point the reader to the historical value of these rare primary sources. The narratives tell stories of the harsh realities of life for the common people of the British Isles, the British Army’s recruitment practices, the enticements and dangers of desertion, and the experiences of British soldiers mingling with the diverse American population. Together, they reveal the humanity of the British soldiers who served in America and help to dispel long-standing myths about the enlisted ranks of the British Army being filled with criminals forced into overseas military service.

William Burke’s memoir, originally published in 1837, which is partially reprinted in British Soldiers, American War. In this selection, Burke describes his early life growing up in County Galway, Ireland, and his subsequent decision to join the British Army.

I was born in the county of Galway, Ireland, A.D. 1752, and by the death of both my parents, I was left an orphan nine or ten years old. My father died soon after my mother; they were, Roman Catholics. At the time of their death I knew no better than to go to the priest, and confess my sins and receive his absolution; he would tell me that I was then as free from sin as the child unborn. Soon after the death of my father I was sent to school. I became fond of going to school, and at the age of fourteen could read and write very well. About this time, Mr. James Morrison, a dancing master, came from England, and set up a school in the town where I then lived. I went to his school; he taught reading and writing, as well as dancing. I soon grew very fond of dancing, and made great proficiency in the art.

By this time, I had grown to the size of a man, was 16 or 17 years old, and went to live with Thomas Hudson, Esq., near the town of Aithlone, 65 miles west of the city of Dublin, in the capacity of steward. I collected his laborers, and kept accounts of the number of days they worked, &c. After living with this gentleman two years, I went to live with the Rev. Mr. Young, a clergyman of the Church of England, who lived in the town of Aithlone. With him I lived two years; my employment was the collection of his salary. From thence I went to live with Pierce Fitsgerald, Esq., of Baltimore, with 30 miles of Dublin. At this time the British officers were beating up for volunteers, and as I had a wish to become a soldier, I took a seat in the stage coach for Limerick, where was the 45th regiment of foot, commanded by the Hon. Col. Henry Monckton, who was shortly to sail with his regiment up the straits of Minorca. When I arrived, I went to Col. Monckton and told him who I was, as he had some knowledge of my father’s family. I joined his regiment, and soon after this, a soldier having deserted from the regiment, I offered to go as one of the four men whom the colonel was to send with the corporal in pursuit of the man. The colonel smiled and said I might go. So we took off our scarlet coats, and put on others, to prevent our being known by the deserter if we should come where he was. The corporal and the other three had but little knowledge of the customs and manners of the Catholic Irish, but I was well versed in their language, and well acquainted with their customs. The corporal gave up the command and the management of the business to me. We had sixty or seventy miles to go among the wild Irish, and meeting one of the king’s tide-waiters, he told us he believed he knew where the deserter might be found. We set off directly for the place which had been pointed, and arrived there just at dark. Having lain by till the people in the house had all retired to rest, I then set a sentry at each door, and entered the house with the corporal and one of the men, lighted a candle, and went to his bed room, where the man of the house and his sons were lying, and told them if they made any noise they were dead men; instantly placed a sentinel over them, and went with the corporal, into the room where the deserter was in bed with a young woman who had ran away in his company. I sprung to the bed-side, put my bayonet to his breast, and told him he was my prisoner. We then took him, and set off for the river that runs from that place to Limerick; we had seven or eight miles to march o the place where we had seen the king’s tide-waiter; we arrived at day-light, and embarked on board a sloop for Limerick, and arrived there the afternoon of the next day.

When we came to the castle the whole regiment flocked around us to see the deserter; they had thought that we should all have been killed by the Catholic Irish. The colonel ordered the sergeant of the guard to take the deserter to the guard house; he then thanked us for our faithfulness, and when he understood from all the party that young Burke was the sole means of taking the prisoner, he told me he would not forget me, and then out his hand into his pocket, and gave me a guinea. Soon after this, I was sent to the town of Aithlone in pursuit of a deserter. I found him and enlisted three or four young men. When I returned the colonel was highly pleased, and told me that if I went on as I had begun, I should soon have a commission. This was in the autumn of 1774; early the next April we received orders to be ready for foreign service, and shortly afterwards we marched to the city of cork. We tarried there six days. While there our regiment was ordered under arms to guard a man to the gallows; this was the first time that I had seen a man hung.

On the 12th of May, 1775, we embarked for Minorca; there were several transports employed to convey the whole regiment, which was one thousand strong, besides officers and women and children. Our voyage was very pleasant till we arrived in the bay of Biscay, where we had such a terrible storm for two days and nights that the captain ordered the hatchway closed down, and tarpauling nailed over it. My situation was now very unpleasant, as I had never been ten times on the salt water before. I would have made my own bed and felt that I must lie on it.

I begged and prayed for mercy, although I was very ignorant of that holy God upon whom I called. I had been taught to pray in the Catholic manner from a child, and always kept a prayer book. Soon the Lord was pleased to send us calm weather. The ship seemed to work regular; we sailed onward until we came near Gibralter, when one morning, to our great surprise a British man of war came in sight, and fired a great gun over our ship. We did not know what it meant. She soon came up with us and hailed. Our captain replied “to Minorca.” The commodore asked what troops were on board, and we answered the 45th regiment. “Who commands them?” “The Hon. Col. Monckton.” “Tell him to come on board my ship.” The colonel went on board the man of war, and was ordered to sail for New York, North America, as the king’s colonies had rebelled. So we were all countermanded. The troops were all sorry, but could not help themselves. We arrived at Sandy Hook, and found the harbor of New York full of transports with British troops. The same day, as soon as we had dropped anchor, the Admiral hoisted signals for all the captains of the transports to come on board his ship to receive orders. In two hours they returned with others to sail directly for Boston, as the British army had been defeated at Bunker Hill.

For more about the British Army during the Revolutionary War, learn about the Museum’s 2019-20 special exhibition, Cost of Revolution: The Life and Death of an Irish Soldier.