Tickets Now on Sale for 2022 Conference on “Collecting the Revolutionary War,” April 7–9 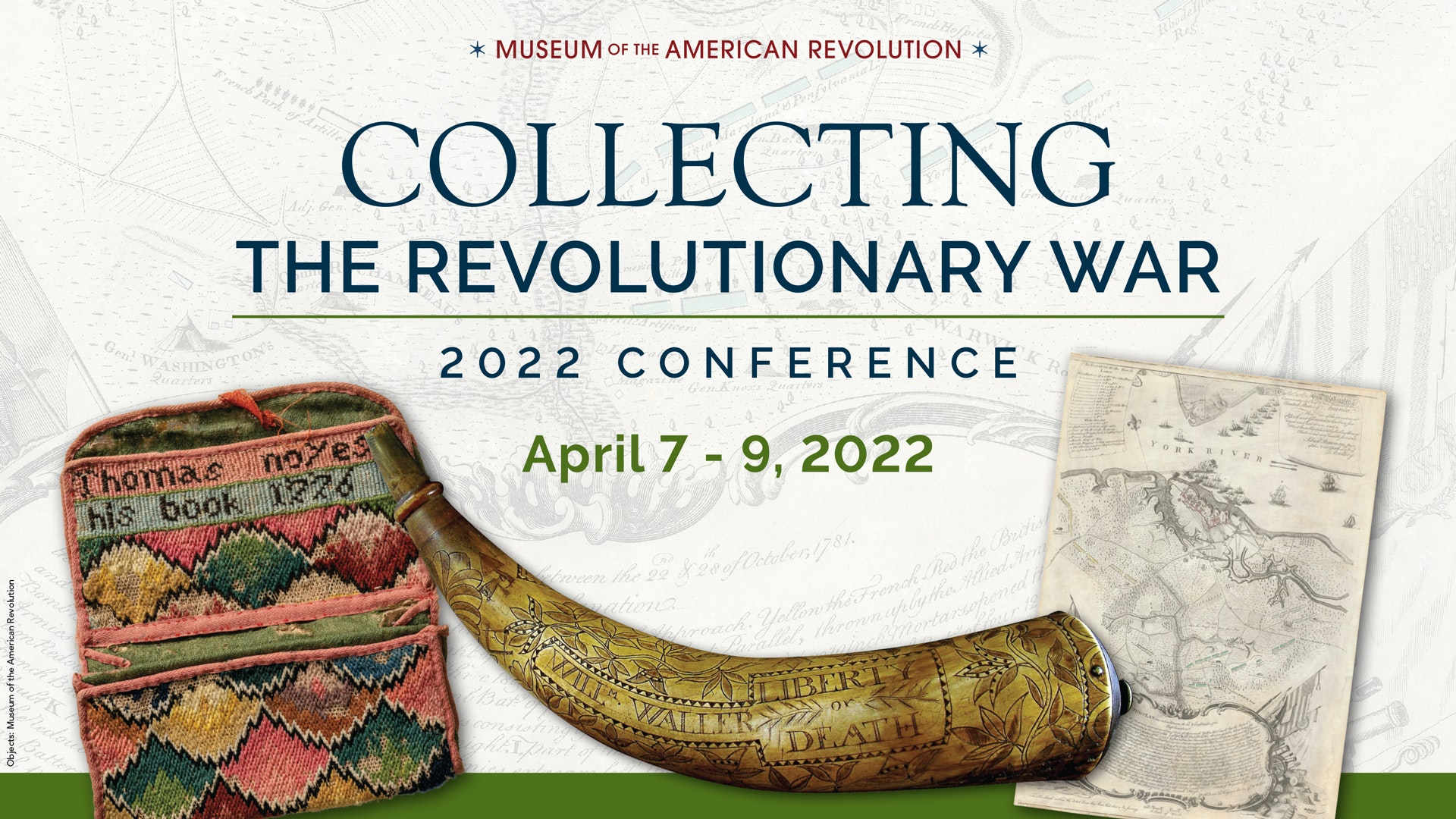 How were military objects created, used, and collected during and after the Revolutionary War? What personal memories and meanings did these objects hold for the War’s survivors, veterans, and later generations who sought to save them as relics of the Revolutionary era? The Museum of the American Revolution’s 2022 Conference on Collecting the Revolutionary War from April 7–9, 2022, will bring historians, museum professionals, and collectors together to discuss how ideas about these objects have influenced collecting and public history over the past 250 years. All sessions will be held live at the Museum and will be livestreamed for online ticketholders.

Distinguished speakers will share their work and participate in lively Q&A with onsite and online audiences. Sessions will highlight independent scholarship and include experts from Colonial Williamsburg Foundation, DAR Museum, Fort Ticonderoga, Seneca Art and Culture Center at Ganondagan State Historic Site, and University of Delaware, among others. Additional sessions will be announced on the conference website.

The conference will begin with an opening keynote lecture by President Emeritus at Historic Deerfield Philip Zea, titled “Revealing the Culture of Conflict: Engraved Powder Horns from the French and Indian War and the American Revolution,” hosted by Museum President & CEO Dr. R. Scott Stephenson. ﻿Zea will explore the world of the citizen soldier through the cultural meanings of powder horns and related equipment.

With topics in material culture ranging from family and national treasures to battlefield archaeology, the conference will explore the first generation of collectors in the 1770s, early institutional collections founded in the 1800s, and more recent discoveries about these wartime artifacts and their influence on historical interpretation in collections, exhibitions, and digital initiatives today. The conference aims to inspire a scholarly investigation of the meaning of Revolutionary War collections and to deepen curatorial conversations about how priorities in collecting should fit into upcoming commemorations of the 250th anniversary of the Revolutionary War.

Tickets begin at $60 and are available for purchase here. Scholarships are available for students, educators, and young professionals. Onsite tickets include select meals; a happy hour session of 10-minute “flash” artifact talks on Friday, April 8, presented by Young Friends of the Museum; full access to the Museum’s exhibits including the special exhibition Liberty: Don Troiani’s Paintings of the Revolutionary War; and networking opportunities.

About Philip Zea
Philip Zea became President & CEO of Historic Deerfield, Inc. in Deerfield, Massachusetts, in 2003. He worked as Vice President for Museums and Collections at the Society for the Preservation of New England Antiquities (now Historic New England) in Boston between 2001 and 2003 and prior to that as Curator of Furniture at the Colonial Williamsburg Foundation in Williamsburg, Virginia. He was employed previously by Historic Deerfield for eighteen years, concluding as Deputy Director and Chief Curator. Zea has also been a staff member of the New Hampshire Historical Society, where he is now on the board of trustees. He has consulted for many museums on the topics of early furniture, clocks, engraved powder horns and historical interpretation.