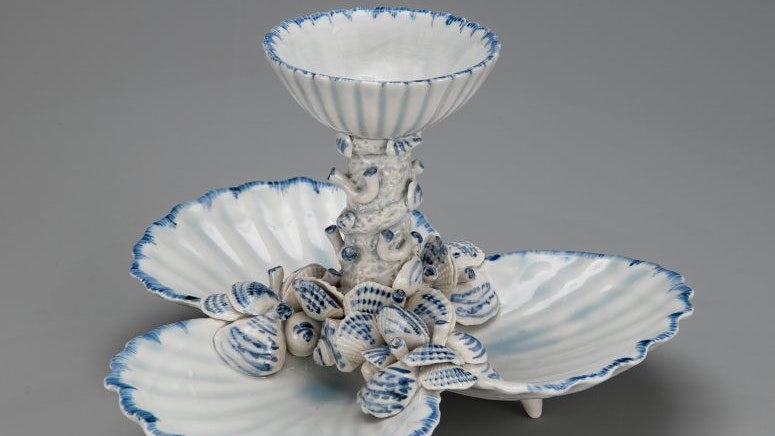 What can one piece of porcelain tell us about the American Revolution?

In a newly released 18-minute film, master ceramicist Michelle Erickson recreates an 18th-century Philadelphia-made masterwork known as a Bonnin and Morris pickle stand – an exquisite tiered serving dish – and explores the political significance of American-made porcelain during the Revolutionary era.

During the Revolutionary era, ceramics were often emblazoned with messages that advocated for political change and social justice. Colonists also made a political statement by purchasing American-made porcelain rather than British imports. Inspired by this tradition, Erickson often creates works that offer commentary on 21st-century social, environmental, and geopolitical issues. Her politically charged pieces comment on topics from gun control to mass incarceration.

“I was awed by Michelle’s creative vision and technical ability the first time I saw her work nearly 30 years ago,” said Dr. R. Scott Stephenson, Museum President and CEO. “Reaching back into the past for insights and inspiration even as she passionately embraces contemporary issues, her work is a perfect expression of the Museum’s vision to ensure that the promise of the American Revolution endures.”

Erickson was artist-in-residence at the Museum in December 2018. The residency included a display of Erickson’s historically inspired contemporary work titled American Pickle, an evening program, and a live ceramic demonstration which was filmed for this video.

Erickson’s recreated pickle stand, produced in this film and acquired through the generosity of James D. and Pamela J. Penny, will be displayed in the Museum’s family-friendly discovery center Revolution Place, which recreates the Museum’s Philadelphia neighborhood in the 1770s. Also housed in this space are artifacts excavated from the Museum’s site during an archaeological excavation that produced large 18th-century ceramic deposits, including a bowl identified as the first example of American hard-paste porcelain.

The film was made possible by The Kaufman Americana Foundation; Reeves Museum of Ceramics, The Museums at Washington and Lee University; and The Philadelphia Museum of Art. Thanks to James D. and Pamela J. Penny and Gavin Ashworth Photography. Special thanks to Ceramics in America, Robert Hunter, and Graham Hood. Film by Jorin Hood.

About Michelle Erickson
Michelle Erickson is a Virginia-based independent ceramic artist and scholar, internationally recognized for her mastery of colonial-era ceramic techniques her pieces reinvent ceramic history to create 21st-century social political and environmental narratives. Her ceramic artworks are in the collections of major museums in America and Britain, including the Museum of Arts and Design in New York, Seattle Art Museum, The Potteries Museum & Art Gallery at Stoke on Trent, and the Victoria and Albert Museum in London. Erickson’s body of scholarship concerning the rediscovery of 17th and 18th century ceramics techniques has been documented in many publications, most notably several volumes of the annual journal Ceramics in America. Erickon has designed and produced ceramics for major motion pictures and television series including The Patriot and HBO’s John Adams. In 2007, she was commissioned to design and create the official gift to be given to Her Majesty Queen Elizabeth II during her historic visit to celebrate the 400th anniversary of the founding of Jamestown. In 2012 Michelle was artist-in-residence at the Victoria and Albert Museum in London in the category of World Class Maker. For more information, visit www.michelleericksonceramics.com.