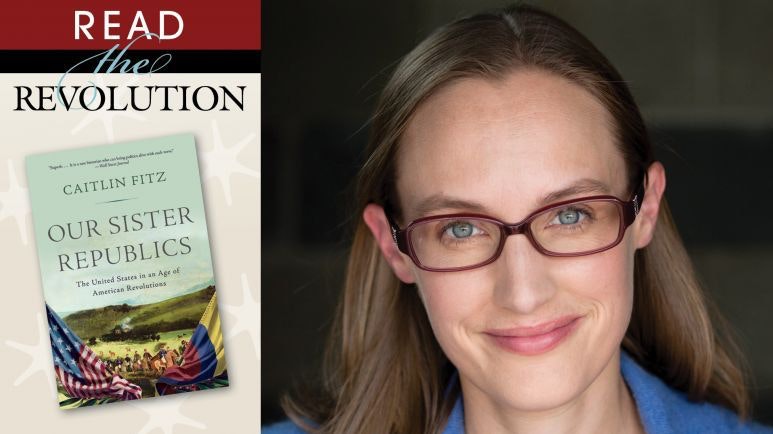 Author and historian Dr. Caitlin Fitz will discuss her award-winning first book, Our Sister Republics: The United States in an Age of American Revolutions, on Tuesday, June 30 at 6 p.m. The virtual conversation with Museum of the American Revolution President and CEO Dr. R. Scott Stephenson is part of the Museum’s popular Read the Revolution Speaker Series. The event is free, but registration is required here.

Winner of the 2016 James H. Broussard First Book Prize, Our Sister Republics: The United States in an Age of American Revolutions (W.W. Norton, Liveright, 2016) shows how Latin America’s wars for independence shaped popular understandings of race, revolution, and republicanism in the United States. Fitz draws on sources and archives in four languages to address how citizens of the new U.S. compared their Revolution and republicanism with Latin America’s independence movements.

“[Fitz] is a deft guide to this reinterpretation of early American history, a time when ‘earlier rhetoric of inalienable rights and self-evident truths was increasingly challenged by assertions of white superiority and U.S. exceptionalism’… Fitz shows that history is not always written by wars, treaties, and administrative actions; often, the people take the lead.” – Kirkus Reviews

“This study, based on strong academic foundations and written in captivating and elegant prose, is an impressive achievement that suggests intriguing origins of American exceptionalism.” – Publishers Weekly

Dr. Caitlin Fitz is a historian of early America and Associate Professor of History at Northwestern University. Her work explores early U.S. engagement with foreign communities and cultures, as well as the relationship between ordinary people and formal politics. In addition to Our Sister Republics, Fitz has written about the hemispheric dimensions of the War of 1812 (Journal of American History, 2015), U.S. citizens in insurgent Brazil (The Americas, 2008), Iroquois communities during the U.S. revolution (Journal of the Early Republic, 2008), and antislavery activists in Tennessee (Civil War History, 2006). She currently serves on the Editorial Board of Early American Studies, as well as on the nominations committee of the Society for Historians of the Early American Republic.

Fitz has written essays, reviews, and opinion pieces for The Wall Street Journal, The Atlantic, and The Los Angeles Times, and she has held fellowships from the Fulbright Foundation, the American Council of Learned Societies, and the Andrew W. Mellon Foundation. Recipient of a Weinberg Distinguished Teaching Award, she offers courses on American history through 1865. She received a doctoral degree in History from Yale University in 2010.