Dr. Martin Myrone, Senior Curator of British Art to 1800 at Tate Britain in London, explored the extraordinary life and art of Richard St. George in its art historical context in his talk "From Gainsborough to Gothic Nightmares" at the Museum of the American Revolution in Philadelphia on Thursday, March 5, 2020.

Myrone discussed how he identified St. George as the sitter for Thomas Gainsborough’s portrait, previously known to art historians only as An Officer of the 4th Regiment of Foot, on loan from the National Gallery of Victoria (Melbourne, Australia) through the run of the Museum of the American Revolution's special exhibit Cost of Revolution: The Life and Death of an Irish Soldier (Sept. 28, 2019 through March 17, 2020). Re-identifying this striking portrait opened up an expected set of connections between the historical trauma of the Revolution and the fantastical culture of the Gothic, involving cheap shocks, weird plots, and amateur dramatics.

Martin Myrone is Senior Curator, British Art to 1800, at Tate Britain, and has been Visiting Tutor in the History of Art at the University of York and at the Courtauld Institute of Art. As a specialist in eighteenth- and nineteenth-century British art, he has delivered a range of exhibition and display projects at Tate Britain, including Gothic Nightmares: Fuseli, Blake and the Romantic Imagination (2006), William Blake’s 1809 Exhibition (2009), John Martin: Apocalypse (2011–12), and British Folk Art (2014), all complete with published exhibition catalogs. 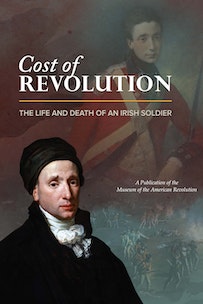 Explore the life and death of Richard St. George, whose dramatic journey is one of the most visually rich stories of a person who was not a statesman, a nobleman, or a high ranking military officer during the Revolutionary era.