One of the greatest treasures in the Museum’s collection is George Washington’s Headquarters Tent. It was Washington’s sleeping and office quarters through most of the Revolutionary War — where he planned military campaigns, met with allies, and wrote his correspondence. Decisions that changed the course of history were made beneath its linen walls.

Learn more about the tent's history from Revolutionary War battlefields to its permanent home at the Museum with the historical timeline below.

after I have once got into a Tent I shall not soon quit it.

General George Washington sends his aide, Colonel Joseph Reed, to Philadelphia to meet with Congress, carry his dispatches, and help Washington prepare to take the field in the coming year.

Washington writes to Reed that “I cannot take the field without equipage, and after I have once got into a tent, I shall not soon quit it.”

Washington writes to Congress that “I desired Colo. Reed when he left Cambridge in the Fall to get me a Sett of Camp Equipage—Tents—and a Baggage Waggon made at Philadelphia under his own Inspection and sent to me.”

Colonel Reed purchases a set of campaign tents for Washington from Philadelphia upholsterer Plunkett Fleeson. According to the surviving receipt for this order, Fleeson makes two “marquees,” one tent for dining and one tent for sleeping, as well as a baggage tent.

Breaking from normal practice, the Continental Army remains in the field well into the winter, until January 1777.

General George Weedon writes to a friend that “His excellency our good Old General, has also spread his Tent, and lives amongst us…”

Washington writes to his brother John Augustine Washington from camp at Middlebrook, New Jersey, on June 29 that in response to British forces under General William Howe in the area, “I began to collect mine at this place; (a strong piece of ground) ten Miles distant from him, where I have now been in my Tent about 5 Weeks.”

The Continental Army marches into Valley Forge for winter quarters on December 19, 1777. After two hard campaigns against British forces in 1776 and 1777, Washington’s set of campaign tents are apparently worn beyond repair.

Colonel James Abeel writes to report the status of Washington’s order for the new campaign tents: "...His Excellencys Marque is all done to binding & fixing the Hooks & Eyes this is made by Women..."

Washington’s field headquarters travels everywhere he does for four more years of war. In this time, Washington returns to his home in Virginia, Mount Vernon, only once.

Washington and his headquarters complex arrive at Yorktown, Virginia, where it is depicted on American artillery officer Sebastian Bauman’s map of the siege. Today, you can stand on the same spot and see the inner chamber of Washington’s sleeping marquee on display at the National Park Service’s Yorktown Visitor Center.

A French officer visiting the Continental Army encampment at Verplanck’s Point, New York, notes that “Opposite the Camp, and on distinct eminences, stood the tents of some of the general officers, over which towered, predominant, that of General Washington. I had seen all the camps in England, from many of which, drawings and engravings have been taken; but this was truly a subject worthy of the pencil of the first artist.”

According to the terms of Washington’s will, the tents remain at Mount Vernon until Martha Washington’s death in 1802.

Beginning in about 1806, George Washington Parke Custis holds an annual tradition of pitching Washington’s tents at Arlington. These events coincide with awards for the improvement of American sheep breeds and orations by Custis about Washington’s legacy and the future of the republic.

The Marquis de Lafayette returns to the United States for a national tour. To honor his return, George Washington Parke Custis hosts Lafayette in a reception at Fort McHenry in Baltimore under one of Washington’s tents. The Boston Commercial Gazette reported that on October 14, “[Lafayette] was conducted to the TENT OF WASHINGTON! He was conducted to this sacred relic of departed greatness by Governor Stevens and suite, and within which the Society of the Cincinnati were waiting to receive him. He entered, and there was a solemn grandeur in the moment, there was a cast about the place, and around those who were assembled, a reverential awe which language could but ill paint—the heart swelled and tears spoke what words could not utter.”

After George Washington Parke Custis’s death in 1857, his only daughter, Mary Custis Lee, inherits Arlington and lives there with her husband, General Robert E. Lee, and their family. In 1861, Lee accepts a commission from the Confederate States of America. As a result, Mary Custis Lee and their family depart for Richmond, Virginia, leaving Washington artifacts, including the tent, behind at Arlington, which is soon occupied by the Union Army.

Selina Gray, an enslaved woman at Arlington who assumes responsibility for the estate’s contents, alerts the occupying Union Army that the Washington-Custis-Lee family collection is in danger. Union General Irvin McDowell arranges to transfer select Washington objects across the Potomac River for safekeeping in the United States Patent Office in Washington, D.C.

Alongside other Washington-Custis-Lee family objects from Arlington House, the marquee tent is seen by public visitors to the United States Patent Office and exhibitions at the Smithsonian Institution.

President William McKinley orders that the items from Arlington House, housed in the Smithsonian Institution, should be returned to descendants of Mrs. Mary Custis Lee. She had petitioned federal courts for these items’ return from 1865 until her death in 1873. Lee’s eldest daughter, Miss Mary Custis Lee, is granted Power of Attorney as the legal caretaker for the Washington artifacts.

Burk and Lee agree to the sale of one of Washington’s tents, the sleeping marquee, to be displayed at Burk’s new Valley Forge Museum of American History under construction with the Washington Memorial Chapel.

The Smithsonian Institution writes to Lee that certain items have been transferred to Burk’s new museum in Valley Forge: “...I beg to advise you that the articles below were delivered on August 19th to Rev. W. Herbert Burk[e]...
A marquee tent;
tent roof;
1/2 wall curtain;
Leather tent case;
2 poles, 4 sections;
14 pins"
Other Washington objects, including the dining marquee, remain at the Smithsonian.

The Washington artifacts that Burk acquired are preserved, along with a growing collection of other materials at Washington Memorial Chapel. Later, his Valley Forge Museum of American History at the Chapel becomes Valley Forge Historical Society and its successor organization, the Museum of the American Revolution. Thousands of people view the tent at the Historical Society at Washington Memorial Chapel and during its on loan to the National Park Service Valley Forge National Historical Park during the United States Bicentennial, before it goes into storage and is carefully conserved for future display.

The Museum of the American Revolution opens in Philadelphia on April 19, including as its centerpiece a display of Washington’s marquee as part of a special theatrical experience, Washington’s War Tent.

General George Washington's original sleeping and office tent is the cornerstone of our collection. 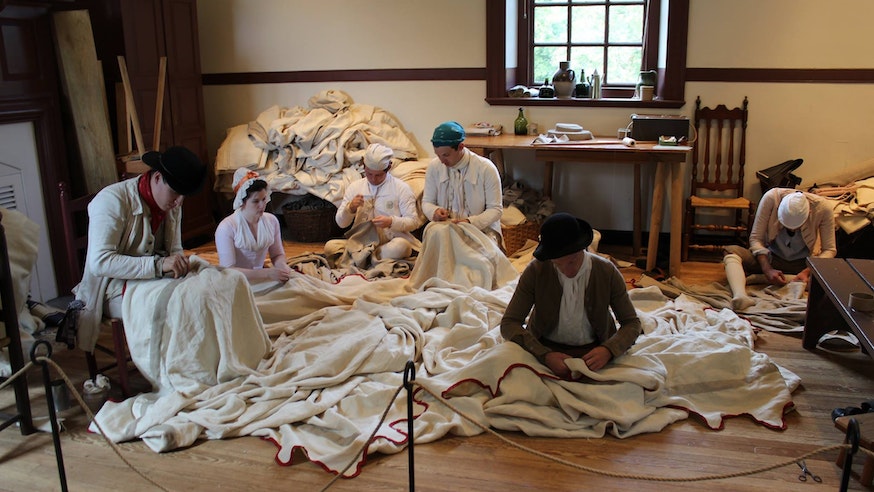 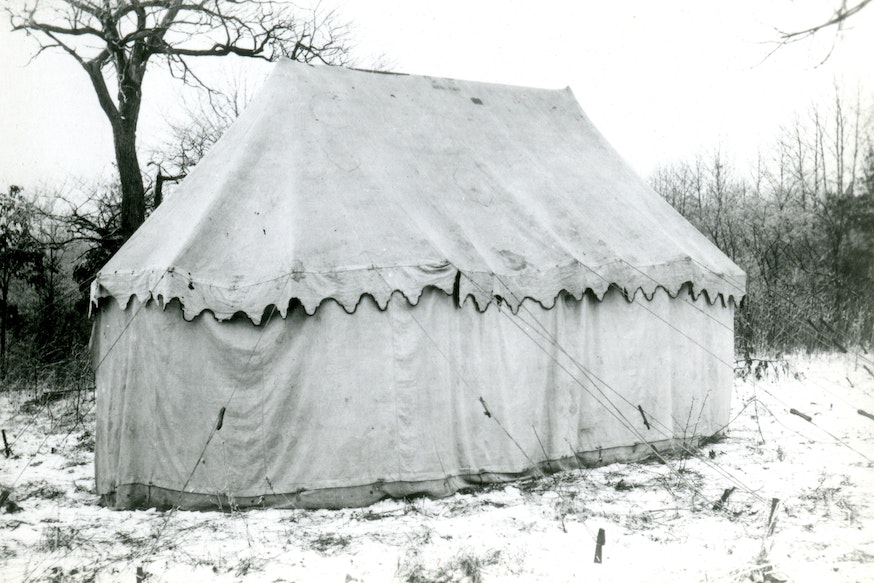