What does women’s fashion tell us about politics? Throughout the “Year of Hamilton” and inspired by paintings, historical research and Paul Tazewell’s costume design for Hamilton: An American Musical, seamstress Samantha McCarty will use 18th-century techniques to create two historically accurate gowns as if they had been pulled right from Eliza Schuyler Hamilton’s closet.

In ongoing gallery education and public programs for Hamilton Was Here: Rising Up in Revolutionary Philadelphia, visitors to the Museum will learn how women’s fashion changed in the tumultuous period from the Revolutionary War to the early Republic.

In conversation with I, Eliza Hamilton (Kensington, 2017) author and co-founder of the blog Two Nerdy History Girls, Susan Holloway Scott, follow the process to make two gowns online from start to finish throughout the “Year of Hamilton” programming at the Museum. 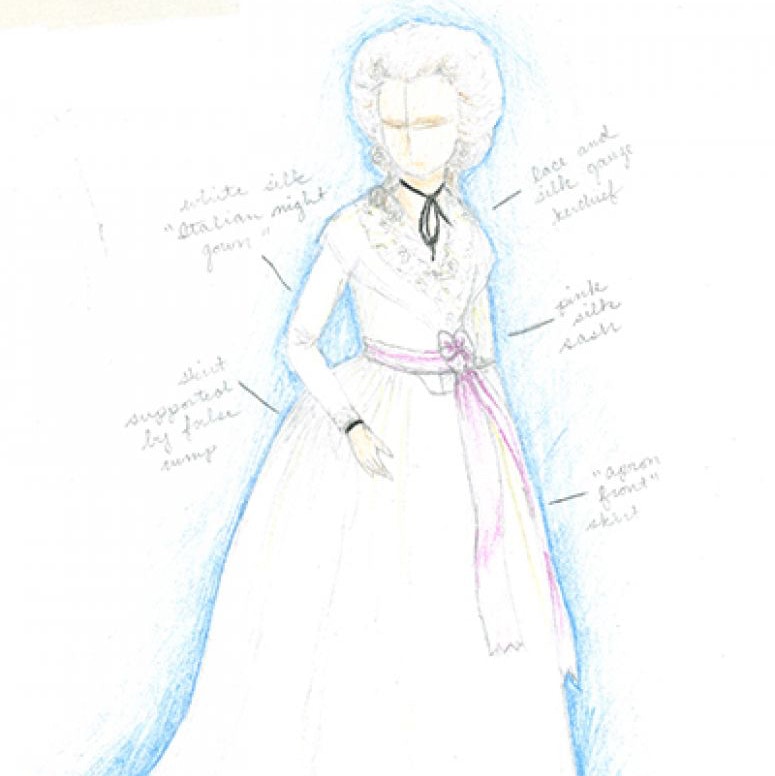 Visit Hamilton Was Here: Rising Up in Revolutionary Philadelphia on Saturdays at 12 p.m. to meet a costumed educator wearing a recreated gown as if it had been pulled right from Eliza Schuyler Hamilton’s closet in 1787. This gown was featured in her 1787 portrait by Ralph Earl. 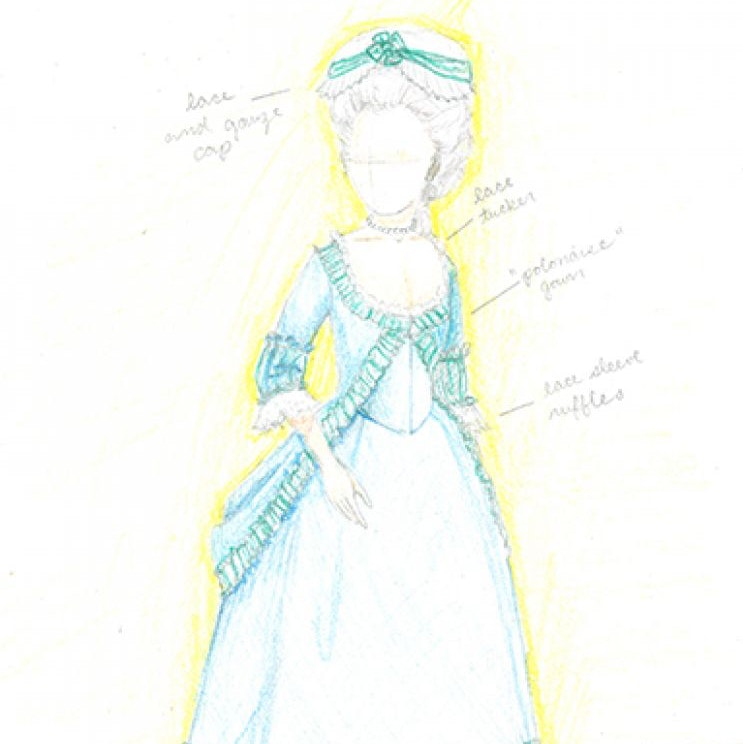 Visit and see Samantha McCarty work in person on Saturday and Sunday, December 29th-30th, as she fits the 1777 gown to a Museum educator.

Samantha McCarty is currently the tailor for the Jamestown-Yorktown Foundation, where she researches, designs, and constructs garments from the early 17th and late 18th centuries. In 2012, she served a ten week internship with the Margaret Hunter millinery shop learning the arts and mysteries of mantua-making and millinery at Colonial Williamsburg Foundation. She was part of the First Oval Office Project which reproduced by hand the marquis tents of George Washington for the Museum of the American Revolution in Philadelphia, PA. Her interests include studying mourning clothing of the mid-19th century.

Susan Holloway Scott is the author of over fifty historical novels and novellas. Her bestselling books have received numerous awards and honors, and with more than three million copies in print, she has been published in nineteen foreign countries around the world. She also writes as half of the popular history blog Two Nerdy History Girls (www.twonerdyhistorygirls.com). A graduate of Brown University, her most recent novel is I, ELIZA HAMILTON. For more information about Susan and her books, please visit her website: www.susanhollowayscott.com.

Amber Mendenhall Welch is a clothing historian and historical seamstress from Mount Vernon, Ohio. She has a B.S.S. in American History and Historical Costume Construction from Ohio University and interned at the Margaret Hunter Millinery Shop in Colonial Williamsburg. She now owns her own historical clothing business, Virgil's Fine Goods, creating historically accurate accessories for living historians and costume enthusiasts. Her specialties include handsewing 18th-century finery, historical hairstyling and millinery/hatmaking. You can follow her at her blog: Lady of the Wilderness or on Instagram @ladyofthewilderness or @virgilsfinegoods.

Museum of the American Revolution Staff: