These are the times that try men's souls.

Core Question #2: How did the Revolution survive its darkest hour?

America would soon learn that it was one thing to declare independence, and quite another to secure it. The Battle for New York during the fall of 1776 tested Commander-in-Chief General George Washington and his Continental Army. Follow the American retreat from New York through the Battles of Long Island, White Plains, and Fort Washington, as 1776 came to a close and American troop numbers and morale began to dwindle.

Walk across a floor-sized map of the campaign in New York, while looking at original witness objects from those battles. Many of these objects have never been displayed in a public museum before. Design your own soldier uniform with an interactive display, and learn about how soldiers displayed their loyalties and ideas of liberty by engraving mottos on their equipment, or by choosing a particular fashion of fighting clothes.

Chart the action on an interactive map that highlights the encampments, advances, and encounters of the American army and the British and Hessian army at the Battles of Trenton and Princeton. Examine their weapons and uniforms in a touchscreen interactive; and read narratives of their wartime experiences, like that of Joseph Plumb Martin during the New York Campaign or Private Johannes Reuber, a Hessian soldier taken prisoner at the Battle of Trenton.

Arms of Independence - The Weapons of War Enter this object theater and gaze upon an impressive wall display of world-class weapons used during the Revolutionary War and read about many citizen soldiers who carried this weaponry. Visitors can immerse themselves in a 360-degree, detailed view of the weapons and personal accoutrements on display, including muskets, swords, powder horns, cartridge boxes, and more.

Women and the War

Live the Battle of Saratoga in New York through the eyes of a Hessian soldier's wife, who documented her harrowing wartime experience in her diary. Join Quaker schoolmistress Hannah Catherall and her fellow Quakers and glimpse Independence Hall (where the Declaration of Independence was signed) in a way you never expected to — as a prison for American officers and barracks for British soldiers during the British occupation of Philadelphia in 1777. Battlefield Theater
In the panoramic Battlefield Theater, experience the fear and frenzy of being on the front line as you are confronted by an all-out British infantry charge at the Battle of Brandywine. The terror of war comes to life in this intense theater experience. 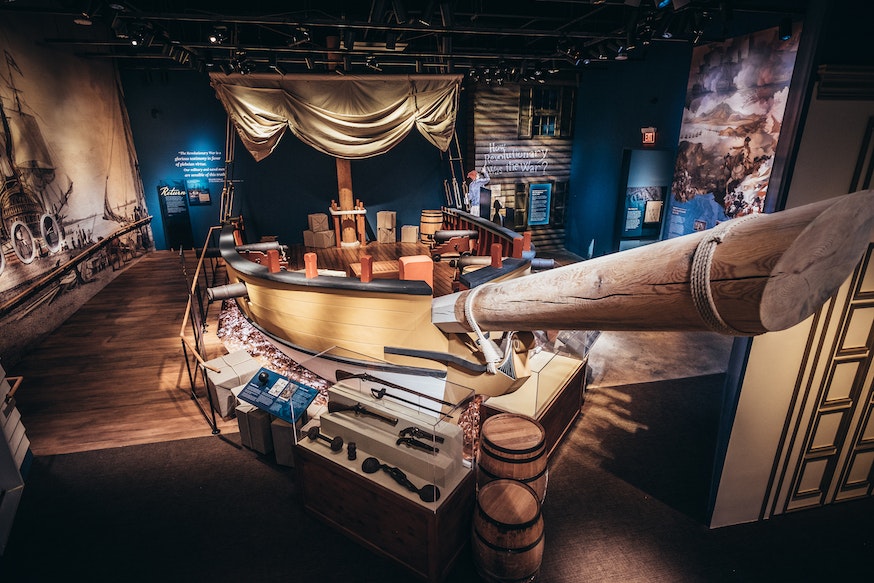