Richard St. George's story was featured in the Museum's special exhibition, Cost of Revolution: The Life and Death of an Irish Soldier, which ran from Sept. 2019 to March 2020. Read more below about St. George's life, the trauma he faced, and his untimely death.

Born into a wealthy Irish family in County Galway in about 1752, Richard St. George grew up as a member of the Protestant ruling class of Ireland. At the time, Ireland was part of the British Empire. St. George became a landlord when he inherited thousands of acres of his family’s land as a young man. In 1776, he joined the British Army and crossed the Atlantic to fight against the American Revolution. He battled with George Washington’s army around New York and Philadelphia. 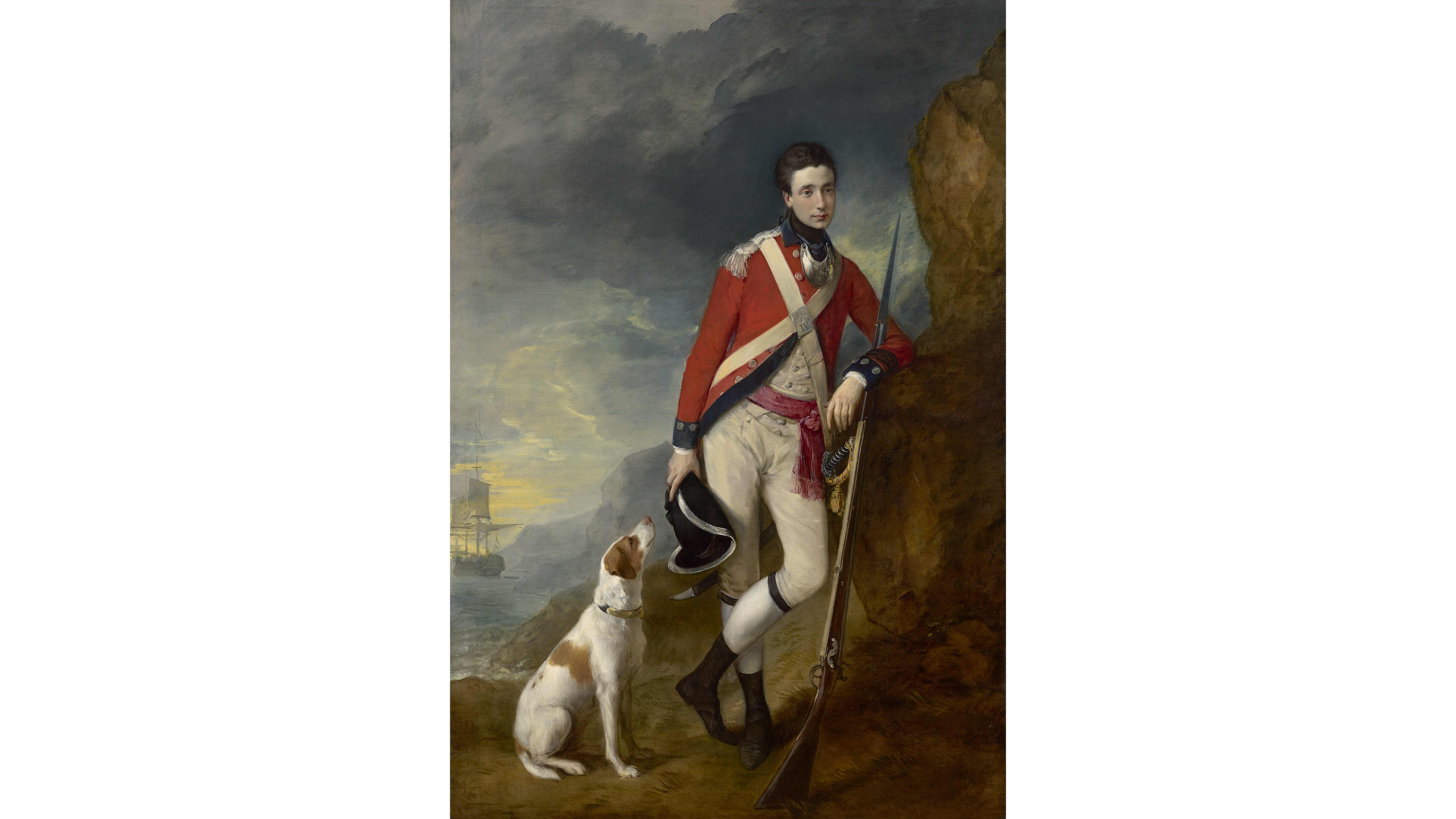 Richard St. George in 1776, painted by Thomas Gainsborough, just prior to leaving for war in America. National Gallery of Victoria, Melbourne, Felton Bequest, 1922

St. George served as an officer in the British light infantry during the campaign to capture Philadelphia in 1777. Fellow officers remembered his aggressiveness on the battlefield and his artistic abilities. A published cartoonist, St. George drew sketches of his experiences fighting in America. At the battles of Brandywine and Paoli, he saw, firsthand, the brutality of war. 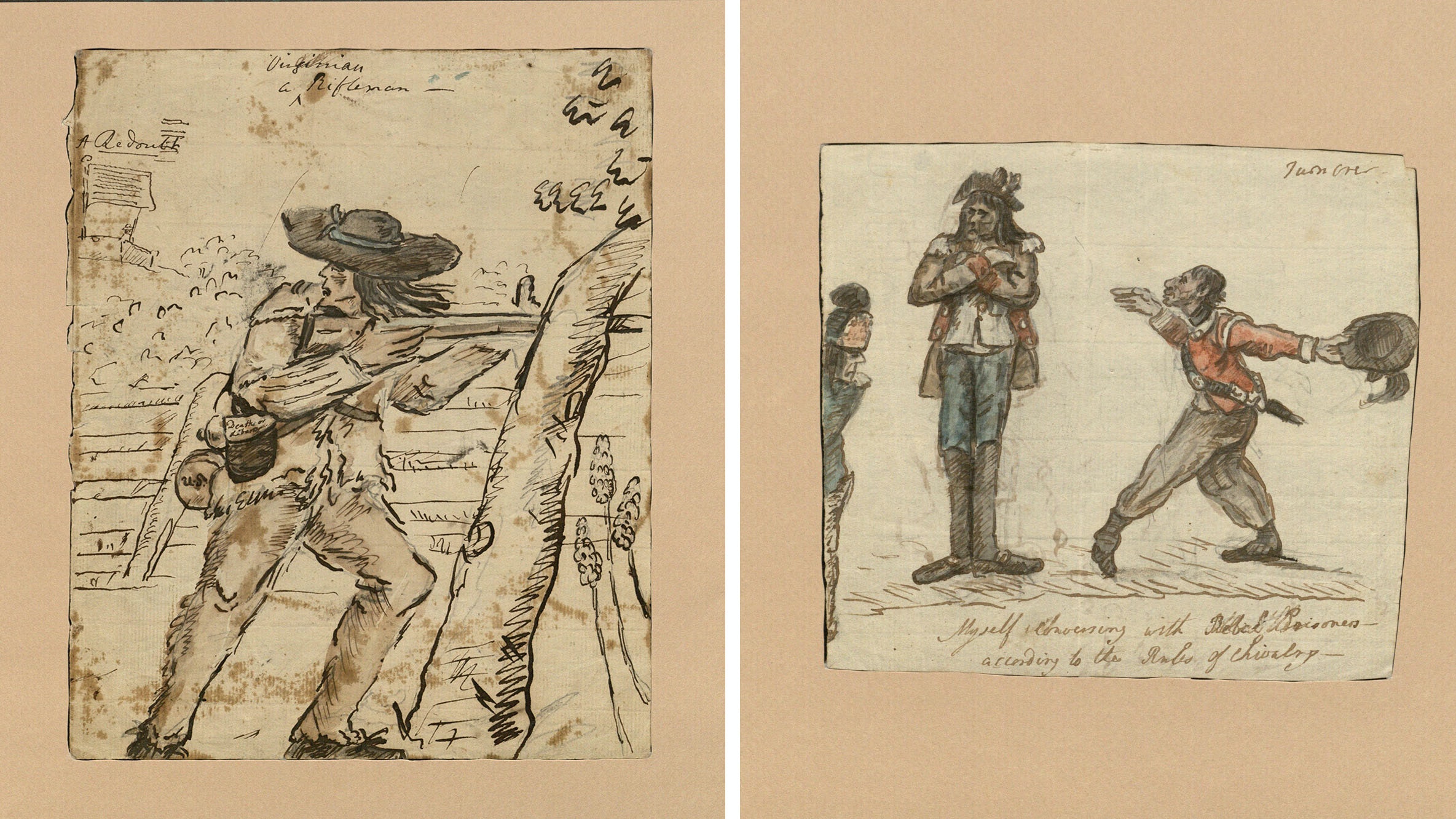 St. George sketched vignettes from his wartime experience including this depiction of a rifleman from Virginia (left) and his own mockery of American prisoners of war (right). Harlan Crow Library, Dallas, Texas

On October 4, 1777, St. George was shot in the head at the Battle of Germantown but amazingly survived. He endured a skull operation in Philadelphia and suffered from the effects of this traumatic event for the rest of his life. Richard St. George drew a sketch of himself being carted into Philadelphia following his wounding at the Battle of Germantown. He added sardonic humor to this traumatic event by titling the sketch, “My triumphant entry into Philadelphia.” Harlan Crow Library, Dallas, Texas

Richard St. George returned home to Ireland in 1778 to recover from his wound. St. George wore a black silk head wrap to cover his injured skull. He caught the attention of poets and fellow artists who were fascinated by his story of survival and his experience in war. 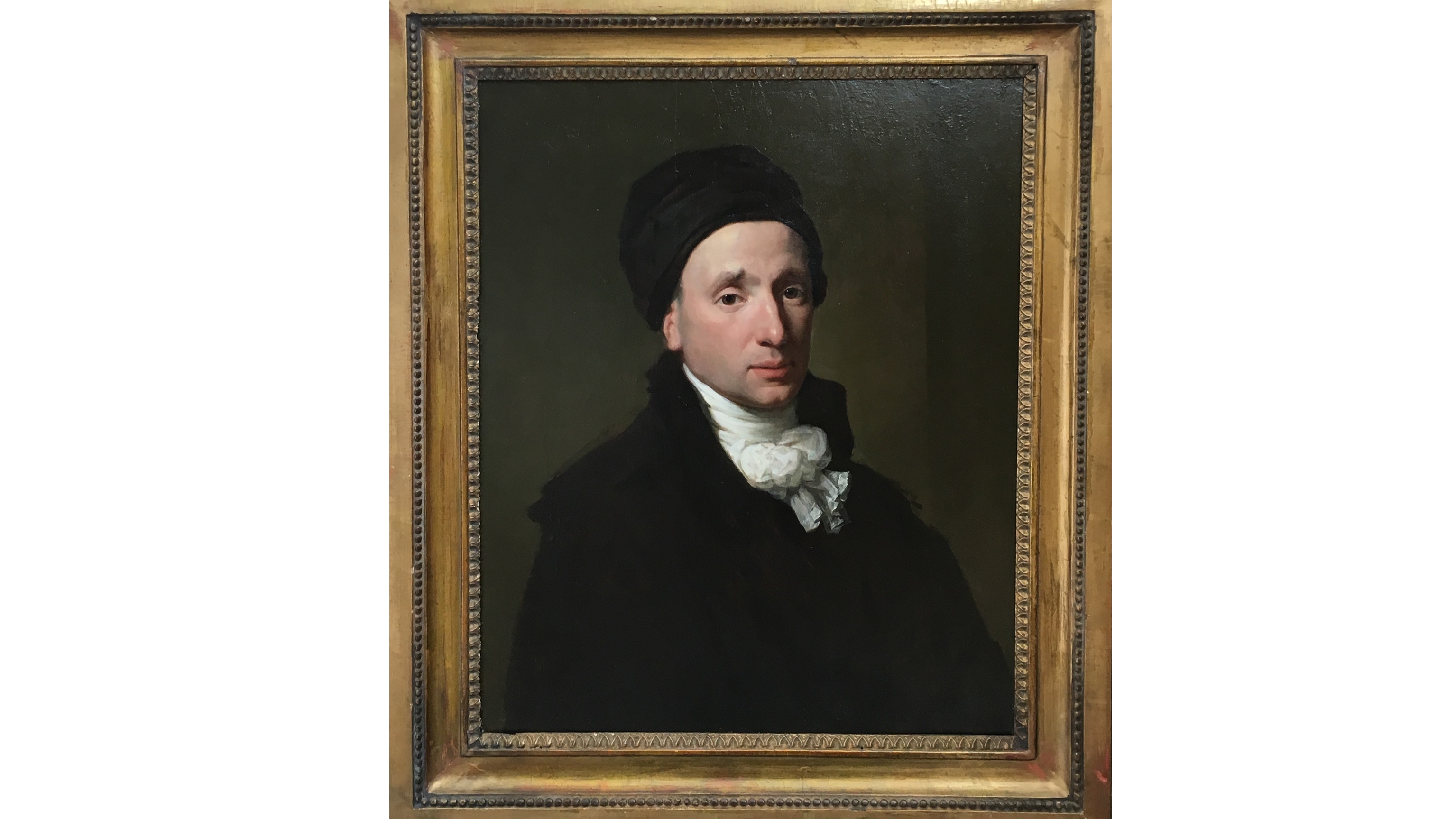 In search of a warmer climate to relieve his head pain, St. George took trips to Italy in the 1780s. In Naples, he met artist Xavier della Gatta and worked with him to capture the drama of the battles of Paoli and Germantown in two paintings. St. George had himself included in the Germantown painting being carried off the battlefield. The two paintings may have helped St. George deal with his memories of violence. 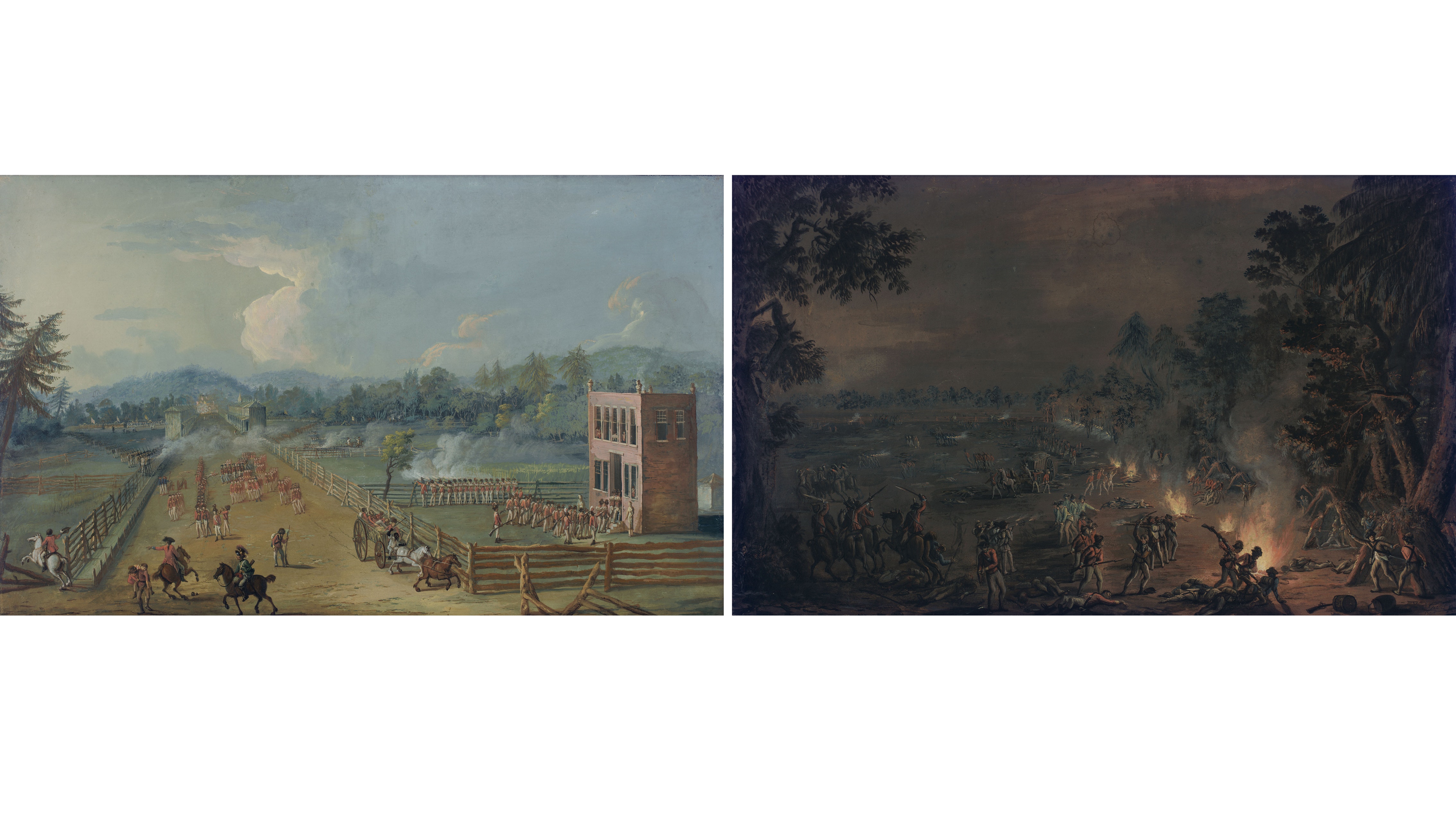 St. George continued to produce sketches after returning home from war. Observers described that his artwork depicted “melancholy or horrific subjects” and may have reflected the daily pain and constant hallucinations he experienced as a result of his head wound. St. George also befriended the artist Henry Fuseli who helped to usher in the Romantic era of art with his famous paintings of fantasies and horrific scenes. Fuseli’s art may have influenced St. George’s personal artwork. Richard St. George’s self-portrait may capture one of his trauma-induced hallucinations on paper. He sketched himself in a ruinous, melancholic landscape with two demonic figures staring at him. Museum of the American Revolution, Gift of Mr. Roger Shuttlewood

St. George’s life took a tragic turn when his wife, Anne Stepney, died in 1792, four years into their marriage. Anne Stepney St. George’s sudden death left Richard St. George as a widower with two young sons. He plunged into deep depression and wrote about his feelings. He even devised a plan to have Henry Fuseli paint his portrait that conveyed his grief. The painting was to be locked away in a room at St. George’s home so that his young sons would have access to it only when they were mature enough to understand their father’s suffering. St. George seems to have never shared his plan with Fuseli. He instead commissioned a large portrait of himself mourning at his wife’s tomb painted by Hugh Douglas Hamilton. 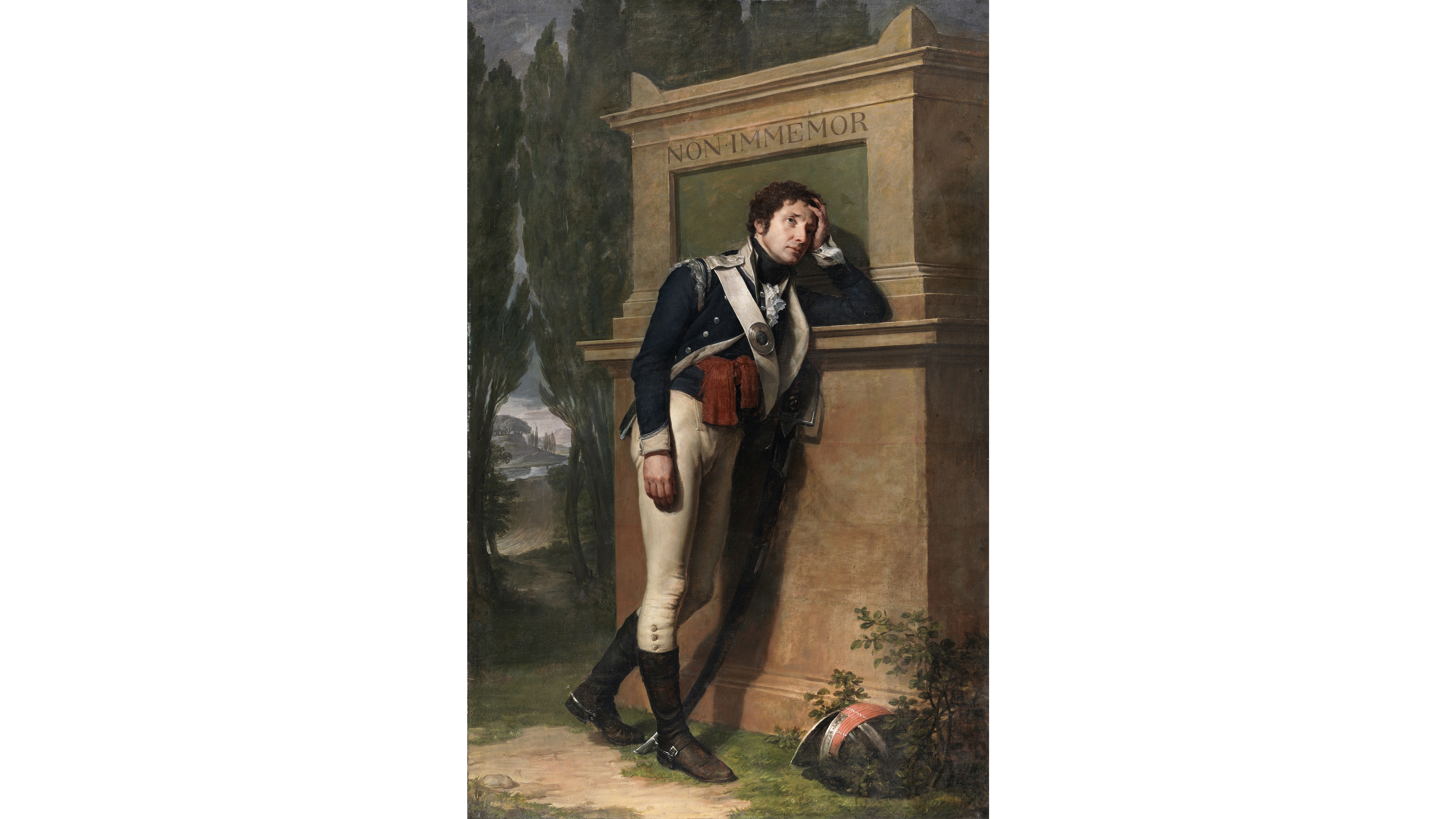 Painted in about 1796, this portrait by Hugh Douglas Hamilton shows Richard St. George mourning at his wife’s tomb, which bears the inscription “NON IMMEMOR” (not forgotten). St. George wears the blue uniform of the British 18th Light Dragoons. At the time, he worked to stop a growing revolution in Ireland in the 1790s. Photo © National Gallery of Ireland 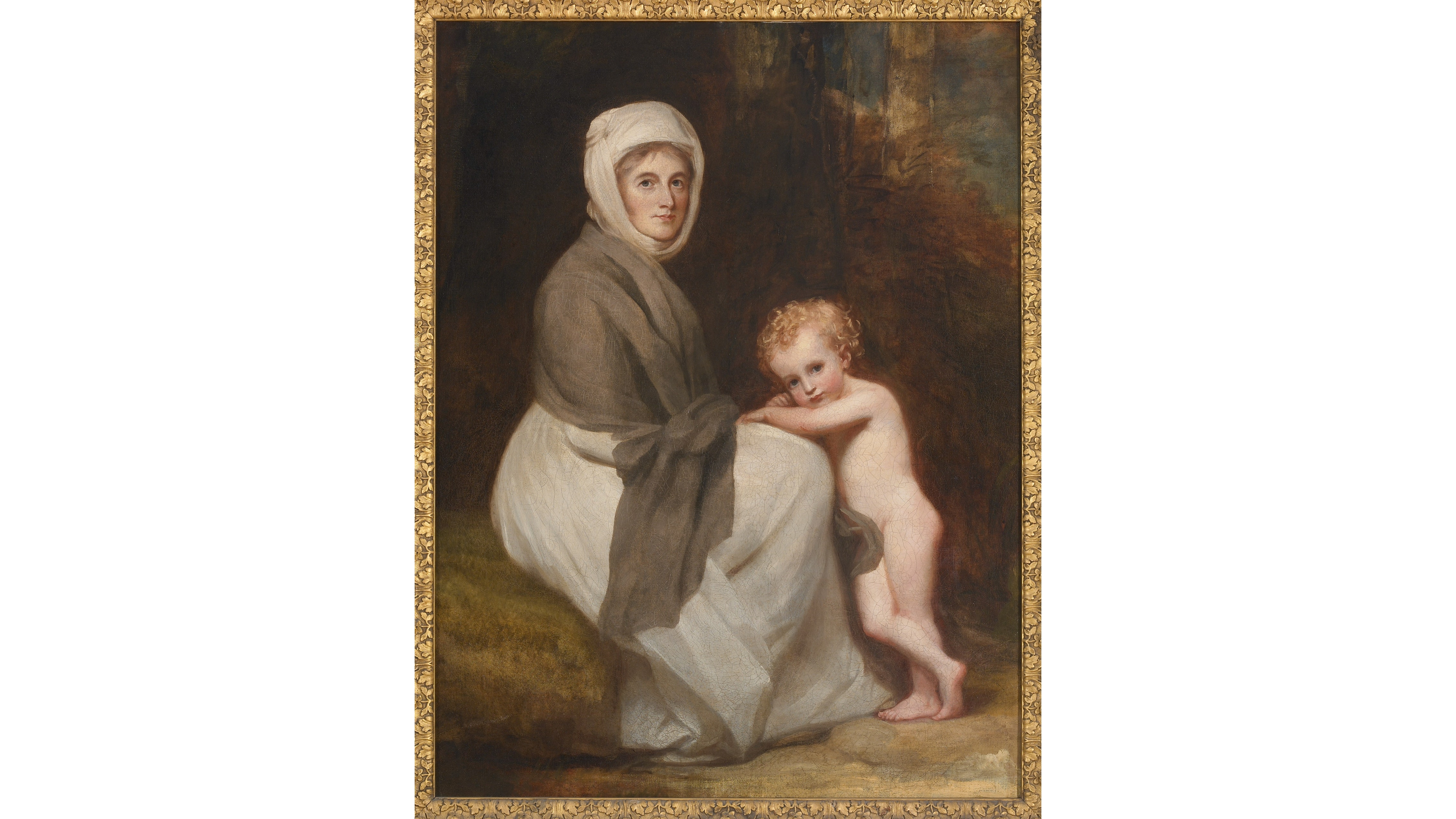 In the 1790s, St. George became an outspoken opponent of a movement for Irish independence from Great Britain. Inspired by the republican ideals of the American and French revolutions, Irish Revolutionaries led by the United Irishmen dreamed of creating an Irish republic free from control by the British. From St. George’s perspective, the Irish Revolutionaries threatened the British Empire and his position as a wealthy landlord. St. George took violent action to stop “rebellious” activity among his tenants and made enemies. On the night of February 9, 1798, a group of St. George’s tenants ambushed and killed him. To them, St. George represented the British control that needed to be eliminated from Ireland. In May 1798, the United Irishmen launched their revolt. Ireland became engulfed in civil war, but the British and their loyal Irish supporters defeated the United Irishmen months later. 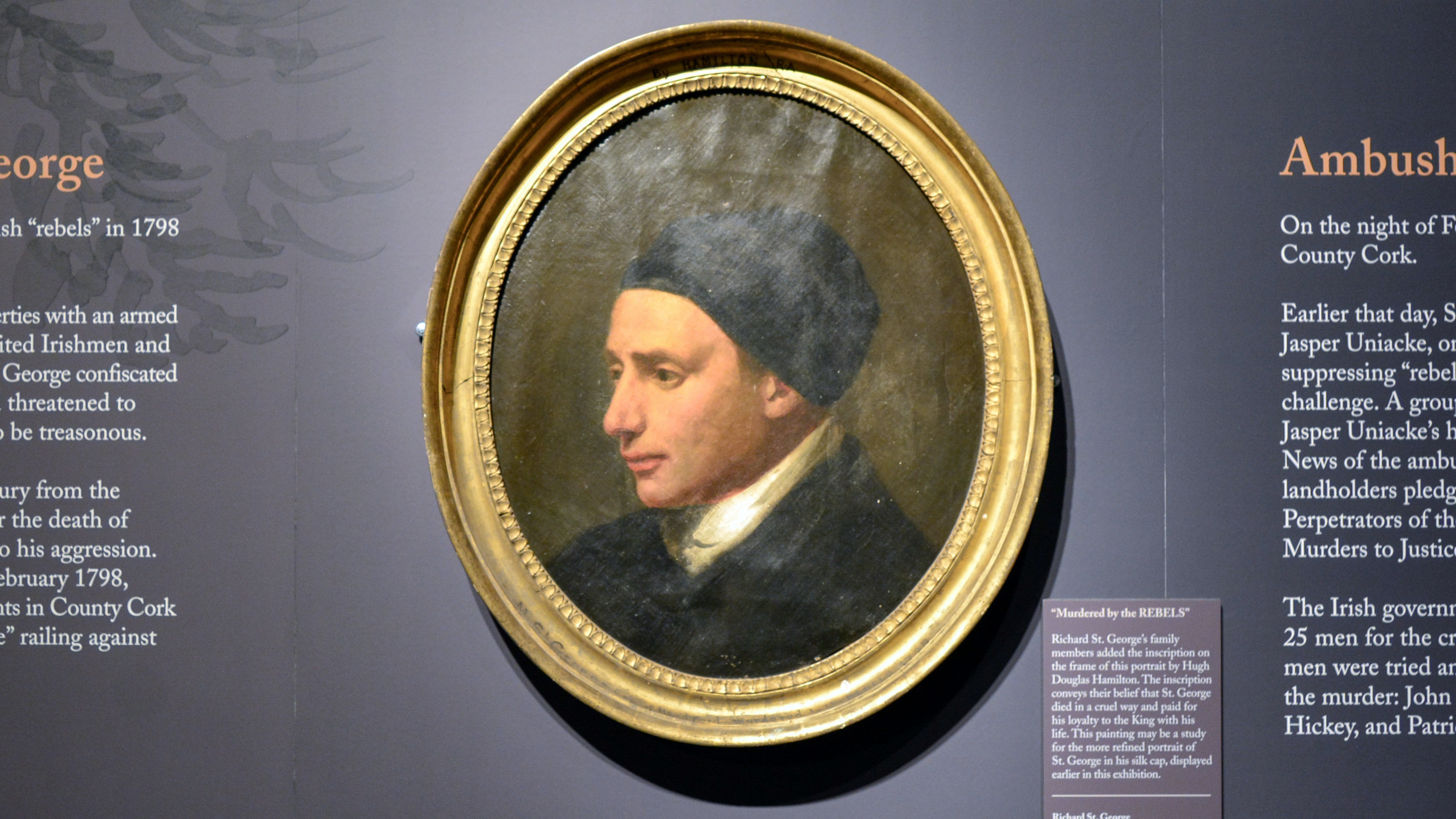 Richard St. George’s descendants added the inscription “murdered by the REBELS” to the frame surrounding this portrait of him painted by Hugh Douglas Hamilton. St. George’s friends and family mourned his death and many loyal supporters of Britain’s rule over Ireland considered him to be a martyr for the Crown. Private Collection