Women of the Republic 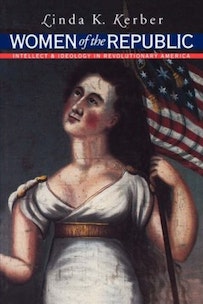 Women of the Republic: Intellect and Ideology in Revolutionary American by Linda Kerber

First published in 1980, Women of the Republic: Intellect and Ideology in Revolutionary America is now considered both a foundational text in the field of women's history and a defining work for the history of early America. In this groundbreaking study of women's letters, diaries, and legal records, Linda Kerber revealed new insights in how women exercised their rights as political beings and examined the rise of the "Republic Motherhood" ideology. From a woman's perspective the American Revolution was a "strongly politicizing experience," as women served the war effort as nurses, cooks, laundresses, and sometimes as soldiers and spies. In the wake of the war women found themselves in the new Republic without a clear political role and so they shifted their political energies to nurturing civic virtue in their sons and daughters.

The following excerpt introduces the concept of "Republic Motherhood" and explores its lasting legacy on the American Republic.

In the years of the early Republic a consensus developed around the idea that a mother, committed to the service of her family and to the state, might serve a political purpose. Those who opposed women in politics had to meet the proposal that women could-and should-play a political role through the raising of a patriotic child. The Republican Mother was to encourage in her sons civic interest and participation. She was to educate her children and guide them in the paths of morality and virtue. But she was not to tell her male relatives for whom to vote. She was a citizen but not really a constituent.

Western political theory, even during the Enlightenment, had only occasionally contemplated the role of women in the civic culture. It had habitually considered women only in domestic relationships, only as wives and mothers. A political community that accepted women as political actors would have to eliminate the Rousseauistic assumption that the world of women is separate from the empire of men. The ideology of Republican Motherhood seemed to accomplish what the Enlightenment had not by identifying the intersection of the woman's private domain and the polis.

The notion that a mother can perform a political function represents the recognition that a citizen's political socialization takes place at an early age, that the family is a basic part of the system of political communication, and that patterns of family authority influence the general political culture. Yet most premodern political societies-and even some fairly modern democracies-maintained unarticulated, but nevertheless very firm, social restrictions that isolated the female domestic world from politics. The willingness of the American woman to overcome this ancient separation brought her into the all-male political community. In this sense, Republican Motherhood was a very important, even revolutionary, invention. It altered the female domain in which most women had always lived out their lives; it justified women's absorption and participation in the civic culture.

Women had the major role in developing this formulation.... Those who shared the vision of the Republican Mother usually insisted upon better education, clearer recognition of women's economic contributions, and a strong political identification with the Republic. The idea could be pulled in both conservative and reform directions. It would be vulnerable to absorption in the domestic feminism of the Victorian period, to romanticization, even, in the 'cult of true womanhood.' It would be revived as a rallying point for twentieth-century Progressive women reformers, who saw their commitment to honest politics, efficient urban sanitation, and pure food and drug laws as an extension of their responsibilities as mothers. Yet despite its contradictory elements, this ideology was strong enough to rout Philanthropos and Morpheus by redefining female political behavior as valuable rather than abnormal, as a source of strength to the Republic rather than an embarrassment.

The triumph of Republican Motherhood also represented a stage in the process of women's political socialization. In recent years, political socialization has been viewed as a process in which an individual develops a definition of self as related to the state. One of the intermediate stages in that process is called deference, in which a person expects to influence the political system, but only to a limited extent. Deference represents not a negation of citizenship, but an approach to full participation in the civic culture.

Deference was adopted and displayed by many women at a time when men were gradually abandoning that attitude; the politicization of women and men in America, as elsewhere, was out of phase. Women were still thinking of themselves as subjects while men were deferential citizens. As men then replaced the restrained, deferential democracy of the Republic with an aggressive, egalitarian democracy of a modern sort, women invented a restrained, deferential, but nonetheless political, role.

There was a direct relationship between the developing egalitarian democracy among men and the expectation of continued deferential behavior among women. Just as planters claimed that democracy in the antebellum South rested on the economic base of slavery, so egalitarian society was said to rest on the moral base of deference among a class of people-women-who would devote their efforts to service: raising sons and disciplining husbands to be virtuous citizens of the Republic. The learned woman, who might very well wish to make choices as well as to influence attitudes, was a visible threat to this arrangement.

Republican Motherhood was a concept that legitimized a minimum of political sophistication and interest, and only of a most generalized sort. Skeptics could easily maintain that women should be content to perform this narrow political role permanently and ought not to wish for fuller participation. Women could be encouraged to contain their judgments as republicans within their homes and families rather than to bridge the world outside and the world within. In this sense, restricting women's politicization was one of a series of conservative choices that Americans made in the postwar years as they avoided the full implications of their own revolutionary radicalism. In America, responsibility for maintaining public virtue was channeled into domestic life. By these decisions Americans may well have been spared the agony of the French cycle of revolution and counterrevolution, which spilled more blood and produced a political system more retrogressive than had the American war. Nevertheless, the impact of many of these choices was to inhibit the resolution of matters of particular concern to women.

It has often been noted that an apparently apathetic population can become intensely political when real issues present themselves. But despite the increasing political sophistication of the male public, women were left with only the most primitive of political mechanisms: the personal or collective petition. That women made increasingly effective use of this option throughout the antebellum period does not negate the point that only a deferential political role was thought to be appropriate for them. The failure to establish an effective pension system for war widows suggests the limited responsiveness of legislators to women's real needs. Another index of the conservatism of the early Republic is the failure to give high priority to the liberalization of divorce. It is true that in Massachusetts and Connecticut, women made extensive use of the opportunity for divorce provided by colonial law, but most colonies did not have simple divorce codes, nor did any except Pennsylvania hurry to provide them after the Revolution.

When the war was over, Judith Sargent Murray predicted 'a new era in female history.' That new era remained to be created by women, fortified by their memories and myths of female strength during the trials of war, politicized by their resentment of male legislators slighting issues of greatest significance to women. But it could not be created until the inherent paradox of Republican Motherhood was resolved, until the world was not separated into a woman's realm of domesticity and nurture and a man's world of politics and intellect. The promises of the Republic had yet to be fulfilled; remembering the Revolution helped to keep confidence alive. 'Yes, gentlemen,' said Elizabeth Cady Stanton to the New York Legislature in 1854, 'in republican America...we, the daughters of the revolutionary heroes of '76 demand at your hands the redress of our grievances-a revision of your State constitution-a new code of laws.' Stanton would wrestle throughout her own career with the contradictory demands of domesticity and civic activism. The ambivalent relationship between motherhood and citizenship would be one of the most lasting, and most paradoxical, legacies of the Revolutionary generation.