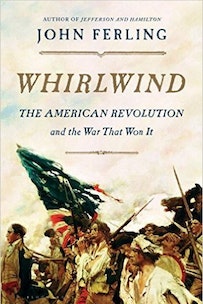 Whirlwind: The American Revolution and the War That Won It by John Ferling

The War of Independence took a toll on all it touched — men and women, Patriots and Loyalists. In this excerpt from John Ferling's Whirlwind: The American Revolution and the War That Won It he shows the trials and tribulations women faced during the long conflict.

The burden of the war fell on both sexes, which may have been a factor in Abigail Adams famously asking her congressman-husband to 'Remember the Ladies' in the 'New Code of Laws' that independence would necessitate. Like thousands of women whose husbands were away at war, Abigail Adams was left at home alone to cope with the children, the family's economic concerns, and the travail caused by the war. After assisting refugees from occupied Boston during the first months of fighting, the war came to her doorstep when camp diseases — ranging from smallpox to assorted fevers — spread from the siege lines in Boston to Braintree. Casualty rates were appalling. 'Some poor parents are mourning the loss of 3, 4 & 5 children, and some families are wholly stripped of every Member,' she reported to her husband in Philadelphia. She came to believe that the plight of civilians caused by the 'desolation of War' and the 'Havock made by the pestilence' equaled the distress faced by the soldiery, and in fact civilian deaths in Braintree late in 1775 may have been proportionally greater than the death rate among soldiers besieging Boston...

Abigail Adams was separated from her husband for all but about twelve months during the decade between 1774 and 1784. Most women whose husbands went to war faced a separation consisting of months, perhaps a year or two. Many of these women were compelled to take on the duties ordinarily performed by their spouse — 'to plough and hoe... and raise bread,' as a Virginian put it, but also to market what was grown and to manage the family's finances — in addition to their customary responsibilities of caring for children and the house. A Connecticut woman whose husband was serving at Fort Ticonderoga noted that her 'duties were not light' and left her with 'no time for aught but my work.' Even Abigail Adams, who was far more affluent than most, took on assignments that she had never previously faced. The Adamses' prewar income had come from the farm and John's law practice; the high cost of wartime labor stripped the farm of much of its profitability, and for all practical purposes, John never again practiced law after the summer of 1774, when he attended the First Continental Congress. Abigail never walked behind a plow, but she learned how to supervise those who were hired to tend to the farm, and in time she grew to be a successful manager of the couple's financial resources. She bought and sold land, and invested in bonds and securities, and in the end she succeeded in preserving the family's solvency despite the severe economic dislocations brought on by the war.

For some women, the experience of taking charge of family and farm was transformative. Early in the war, one woman wrote to her husband at the front about 'Your farming business'; in time, she subtly shifted to writing about 'our farming business.' For women whose husbands were away, the war brought loneliness, endless toil, uncertainty, and apprehension, and for some it brought the grim news that their loved one had either died or been seriously wounded while serving his country. For the handful living near the front lines, or in the no-man's land of civil warfare in, say, New Jersey in 1776 or South Carolina after 1780, there was the churning fear of mistreatment, including molestation, at the hands of an armed soldier.

The war wore on women, as it did on men, and though fervor for the ideals of the American Revolution may not have vanished for those of either sex, the protracted nature of these hostilities tested their willingness to sacrifice. Sarah Hodgkins was twenty-four years old and married to an Ipswich, Massachusetts, shoemaker when the war began and her husband, Joseph, enlisted. Sarah was caught up in the patriotic fervor at the outset of hostilities, but as the war continued seemingly without end, and Joseph reenlisted time and again, Sarah's patriotic intensity waned. At home with seven children — one of whom died during the conflict — she eventually expressed her disappointment with Joseph's unremitting service, notifying him that he had a 'duty to come home to [his] family.' Telling Joseph that she felt like a 'widow,' Sarah finally said, 'Let some body else take your place.' He did, though not until he had served for four years. For all her support of the war, Abigail Adams came to share Sarah's frustration. In 1782, three years after she had last seen her husband, Abigail told John that she felt 'deserted, unprotected, unassisted, uncounseled.' She added that his absence was nothing less than a 'moral evil,' for in the 'holy [marriage] ceremony' he had agreed to the vow 'What God has joined Let no Man put asunder.' Two additional years passed before they were reunited.

The wives of husbands who chose loyalty to the king faced even greater trials. Many Tory families were driven from their homes and forced to flee to strange surroundings. None fell further than Grace Galloway. At the time of her marriage to Joseph, some fifteen years before the war erupted, she and her husband were widely thought to be the wealthiest family in Pennsylvania. They owned five houses, including a mansion on a spacious Bucks County estate. But she lost everything in the course of the war — her houses, their contents, even her friends. After the British army abandoned Philadelphia in June 1778, Grace was forced to spend her last years living alone in a tiny back alley apartment while her husband was in London desperately trying to persuade the British to continue to wage the war. Saying that she was 'undone' and 'could Not forgive' Joseph for having picked the wrong side, she acknowledged that she was 'easey Nay happy not to be with him.' She died alone in Philadelphia not long after the war ended.

Whirlwind: The American Revolution and the War That Won It, by John Ferling (Bloomsbury Press, p. 252-254).