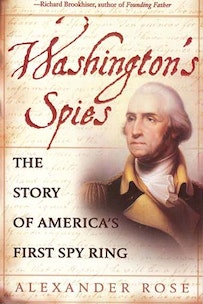 In the summer of 1778 George Washington authorized the formation of a secret chain of agents known as the Culper Ring. Operating in British-occupied New York, this spy ring gathered and shared military intelligence on the British Army’s tactical operations using a coded language and a disappearing ink dubbed the ‘sympathetic stain.’ Those involved in the Culper Ring did so at great personal risk to their lives and honor–covertly traveling through occupied territory and swearing oaths of allegiance to the king–all the while passing information to Washington.

The following excerpt from Alexander Rose’s, Washington’s Spies: The Story of America’s First Spy Ring, describes the establishment of the Culper Ring and the risks involved with eighteenth-century espionage.

On creating the Culper Ring:

[Benjamin] Tallmadge had learned from Nathaniel Sackett how to disguise agents as enemy sympathizers using realistic cover stories, and from John Parke that a spy could nestle within the beast of an unsuspecting foe for months, perhaps years, at a time–provided he enjoyed a secure chain of communication back to base. Tallmadge ambitiously envisioned combining these two approaches to create a network of agents-in-place permanently embedded in occupied New York and running to Long Island, then across the Sound to his headquarters in Connecticut, where the intel would be digested and passed upstairs to the commander-in-chief-with Tallmadge's summary and analysis attached.

[Washington] now wanted a chain of agents stationed permanently in enemy territory. His choice of chief agent was Tallmadge’s recruit, ‘Mr. C–––––,’ because if he ‘could be engaged in a work of this sort, his discernment, and means of information, would enable him to give important advices.’

Invigorated by this unexpected support, Tallmadge intended to forge [Abraham] Woodhull and [Caleb] Brewster into the nucleus of a network–what would become known as the Culper Ring….

Henceforth…Tallmadge adopted a set of aliases: Tallmadge became the anodyne ‘John Bolton,’ and Woodhull, ‘Samuel Culper.’ Washington, [Charles] Scott, and Tallmadge collaborated to invent the latter code name. Samuel Culper's reversed initials are those of Charles Scott, while Washington lightheartedly amended the name of Culpeper County, Virginia–where, aged seventeen, he had worked as a surveyor back in 1749–to ‘Culper.’… Brewster himself preferred to forgo an alias: Being a bluff and reckless fellow willing to take his chances, he always insisted on scrawling his real name, in very prominent letters, on all of his correspondence.

A trusting chain of agents:

Tallmadge was from coastal Setauket, in Suffolk County, the small town in which Woodhull still lived and whence Brewster had left in the years before the war. The three of them had grown up together. Setauket, in every other respect, was an entirely unexceptional Long Island settlement.”

In such an insular and isolated place as eighteenth-century Setauket, everyone knew each other. This complex web of personal relationships, continuing down through generations and concentrated in one compact locality, was key to the Culper Ring’s later success. Its members refused to work with anyone they didn’t know, and insisted on using Tallmadge as their sole channel to Washington. They were one-man dogs.

The fear of being found out:

On October 29, 1778, after having sworn his oath of loyalty to His Majesty, Woodhull dispatched his first ‘Samuel Culper’ letter. Hitherto he had passed on intelligence verbally for fear of incriminating documents falling into the enemy's hands, so Tallmadge had assured him that none but he and Brewster knew his real name, and that, if captured, they would destroy the letters before surrendering. For safety's sake, Tallmadge did destroy Woodhull's original letter after copying it verbatim in his own handwriting and passing that version to headquarters. There was nothing left now to trace it back to Woodhull though the experience of transcribing Woodhull's epistles must have bored the busy Tallmadge, and he soon resorted to just sending on the originals-without telling his trusting correspondent.

Whereas Washington, equipped with a staff of private secretaries, and Tallmadge, nursed on Cicero's cadences and blessed with a Yale education, composed splendidly styled, flowing sentences, Woodhull's provincialism made his punctuation idiosyncratic and spelling atrocious. He used such words as ‘doth’ and ‘hath’-antiquated even by the standards of the time-but as time progressed, so too did Woodhull's abilities.

Because Tallmadge lacked a permanent agent in the city, Woodhull performed double duty by acting as Brewster’s liaison in Setauket and then traveling to New York every few weeks to pick up news. Woodhull hated making that trip: it was by far the riskiest aspect of his job, for not only did villains, Tory plunderers, and British patrols infest the fifty-five-mile road to New York, but worse, he had to leave his aged parents for several days at a time, stay in expensive (for him) inns on the way, and travel by himself in the cold and through the muck.

On October 31, at one British checkpoint where he was routinely questioned, Woodhull ‘received their threats for coming there that make me almost tremble knowing…my business.’ After that little scare, Woodhull’s innate caution prompted him to tell his chiefs to ‘destroy every letter instantly after reading for fear of some unforeseen accident that may befall you and the letter get into the enemies hands and probably find me out and take me before I have any warning.’ (Woodhull would have suffered an apoplexy had he ever discovered that Washington’s staff, despite Tallmadge’s assurances that his agent’s wishes were being carried out, actually kept his letters for administrative reasons–so allowing us to read them today–though Woodhull’s real name was never used at headquarters.)