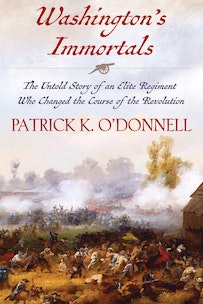 Washington's Immortals: The Untold Story of an Elite Regiment Who Changed the Course of the Revolution by Patrick O'Donnell

Military historian Patrick O'Donnell's Washington's Immortals: The Untold Story of an Elite Regiment Who Changed the Course of the Revolution tells the dramatic story of the First Maryland Regiment and the War for Independence. Known as Smallwood's Battalion, the First Maryland Regiment was present at many of the major battles of the Revolutionary War, including the battles of Trenton, Princeton, Camden, Cowpens, Guilford Courthouse, and Yorktown.

Memorialized as the "Immortal 400," Smallwood's Battalion is remembered for their heroic actions at the Battle of Brooklyn in late August 1776. With Washington's army surrounded on three sides by the formidable British forces, 400 soldiers from the battalion held off the British, allowing the rest of the trapped Continental Army to escape across the Gowanus Creek to safety. The battalion suffered heavy losses for their bravery with 256 dead or missing and many wounded or taken prisoner by the British. As Washington watched the carnage unfold, he remarked, "Good God! What brave fellows I must this day lose!"

The following excerpt describes the formation of Smallwood's Battalion in 1775 in response to the Second Continental Congress' call for the establishment of a Continental Army.

After establishing that [George] Washington would lead the colonial army, the penniless Continental Congress set about raising that army. In a series of resolutions, the Congress recommended that each of the thirteen colonies establish a battalion 'at the expense of the Continent.' Maryland answered this call in a unique way: a battalion with a core cadre of officers and NCOs from the independent cadets at its heart. Smallwood's Battalion was born.

In December 1775 the Maryland Convention, Maryland's Patriot government during the early part of the Revolution, resolved to raise an army of 1,444 troops 'in the pay and for the defense' of Maryland. The following month, the government finalized its plan, determining that the force would consist 'of a battalion of 9 companies, 7 independent companies, [and] 2 companies of artillery.' Each company consisted of at least sixty-eight privates, and some included as many as one hundred. All the men were to be volunteers, described as 'young hearty robust men, who are tied by birth or family connection or property to this country; and are well practiced in the use of firearms.'

Answering the call of the Second Continental Congress to enlist regulars for a Continental Army, Maryland created a force unique in the thirteen colonies because it was neither militia nor Continental; instead, it was a state-funded (from taxes levied from Marylanders and later the seizure of Loyalist property) defense force created to protect Maryland from the British and from the internal threat of Americans loyal to the Crown.

These volunteer regulars enlisted for a year and earned wages paid by Maryland for their service. Privates initially received five and a third dollars; sergeants eight dollars; and the highest-paid member of the unit, the colonel, fifty dollars. These wages, even when they were paid, were barely enough for any member of the force to scrape by. Many of them never received their full wages, which were docked to pay for uniforms. Some soldiers in good standing later received a land bounty.

Smallwood's Battalion also had a tiny contingent of musicians, specifically drummers and fifers. In the eighteenth century men could hardly hear shouted commands over the roar of cannon and muskets, so they learned to follow orders given by the beat of a drum. Each army had scores of drum signals, and men who drilled to them instantly followed these commands. Fifers and drummers also played marching music, popular tunes that the men sang along to. Slowly, these drills and martial music welded men together as they formed a sense of unity.

The men needed shoes, buckles, stockings, shirts, overalls, a hat, a comb, a blanket, a knife, tents, a camp kettle, and other related items in addition to weapons. In the beginning, they supplied many of these needs themselves. Housing and tents were also in short supply. One officer noted that his company was so poorly equipped that the men had to 'encamp out among the pine without Blankets or Tents.' He complained, 'We stand here exposed and remain in a most Defenceless state.' Over time, they needed replacements for their clothing and equipment. Sometimes Congress or the states provided these for the troops, but more often, the men went without.

The new troops also needed food. Officers exchanged many letters on the subject of acquiring meat and bread to fill the battalion's stomachs. Congress fixed rations at a pound of beef, three-quarters of a pound of pork, or a pound of fish per day. Provisions also included peas, beans, vegetables, 'cyder,' and molasses. But like the uniforms and equipment, the rations were more hope than reality. As the war progressed, many Marylanders starved, wore rags, and went barefoot.

Informally, the Marylanders referred to these companies collectively as Smallwood's Battalion, as the colony placed the bulk of the existing independent companies...under the leadership of Colonel William Smallwood. Born in Charles County, Maryland, and educated at Eton College in England, Smallwood came from a family of politicians. After serving in the French and Indian War, he was elected as a representative in the Maryland provincial assembly, the local government for the colony. At the time of his appointment, he was a portly forty-three-year-old planter who was highly respected in Maryland but who also possessed a pettiness that didn't endear him to many of his men.