They Were Good Soldiers 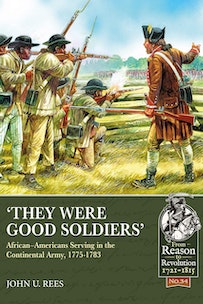 'They Were Good Soldiers:' African-Americans Serving in the Continental Army by John U. Rees

Author John U. Rees drew the title for this engaging and deeply researched book from the recollections of a white veteran of the Massachusetts Line, Henry Hallowell, who in recalling the names of African American men who served with him during the Revolutionary War observed that “they were good soldiers.” While thousands of Black men fought on land and sea in the cause of American Independence, Rees focuses this work on those who served in the Continental Army. Well-organized chapters provide an excellent overview of Black service in both the British and American armies, as well as in-depth explorations of Black soldiers’ experiences in the regiments of each Revolutionary state. In addition to soldiers, Rees has also uncovered remarkable stories of free and enslaved Black women who accompanied the armies, including Hannah Till, who gained her freedom during the war.

The real gold in ‘They Were Good Soldiers:’ African-Americans Serving in the Continental Army, 1775-1783 is in the personal histories and narratives that Rees has laboriously mined in a wide variety of archival sources. Most hauntingly, he recovers the voices of aged Black veterans who wrote or dictated their wartime experiences and details their pursuits of the modest veterans’ pensions enacted by the United States Congress in the early 1800s. Although these early pension depositions are briefer than the narratives gathered by the WPA in the 1930s from formerly enslaved African Americans, they reveal the perspectives of the first generation of Black Americans to call on the new United States to live up to the ideals expressed in the Declaration of Independence. Rees’ research discoveries, collected in this publication, align with our Museum mission to uncover and share these surprising stories. Watch a recent discussion with Rees joined by Adrienne G. Whaley, the Museum’s Senior Manager for K-12 Education, hosted by the American Battlefield Trust on Facebook.

In these two excerpts from Rees, Black veterans share details of their service, emancipation, and freedom in the midst of revolutionary ferment.

"When I was about eight years of age, I was stolen from Africa, my native country, and brought to America; my native name was Prince Dunsick- but on my arrival I was called by my master’s name which was Bailey. By this name of Prince Bailey, I enlisted and served in the Revolutionary War . . .and was discharged by the same name. I never lived with my old master Bailey afterwards, and resumed my former name of Dunsick."

Cuff Ashport’s widow Lydia noted in her 1836 deposition [that] her husband at one time had been called Cuff Mitchell, that he was formerly the slave of Nathan Mitchell of. . .Bridgewater, that he bought his freedom that he bought his freedom in the spring of 1775. Scipio Bartlett enlisted in Colonel Ebenezer Francis’s Regiment in February 1777 and fought at the Battle of Hubbardton in Vermont that July, where Colonel Francis was killed. Bartlett added this postscript:

"I further on oath declare that I was emancipated at the commencement of the Revolutionary War- and was a free man during my whole term of service . . . I am a Black man—but free—and of the age of sixty-six years. . ."

Rees also shares a stirring account of the Battle of Trenton left by Jacob Francis, a free man of color who enlisted in 1775 and who crossed the Delaware River the following year as a soldier in Washington’s Army:

"We received orders to march & Christmas night crossed at the river, down to Trenton early in the morning. Our Regement crossed at Howells ferry four miles above Trenton & marched down the river Road & entered the West end of the town- General Washington with the rest of the Army crossed at McConkey’s ferry four miles above Howells & marched down the Scotch road & came into the North End of the town- We marched down the street from the river road into the town to the Corner where it crosses the street running out towards the scotch road & turned up that street & General Washington was at the head of that street coming down towards us & some of the hessians between us & there we had the fight & the principal firing was. After about half an hour the firing ceased & some officers among whom I recollect was General Lord Stirling rode up to Coll: Sergeant & conversed with him then we were ordered to follow him And with these officers & Col Sergeant at our head. We marched down thro the town toward Assanpenk & cross the Assanpe on the North side of it & to the East of the Town where we formed in a line and in View of the Hessians who were paraded on the south side of the Assanpenk & grounded their arms & left them there & marched down to the Old ferry below the Assanpenk between Trenton & Lamberdon, soon after that a number of Men from our Regement were detailed to go down & ferry the Hessians Across to Pennsylvania I went & about noon it began to rain & rained Very hard we were engaged all the afternoon ferrying them across til it was quite dark when we quit, I slept that night in an Old Mill hous above the ferry on the Pennsylvania side/ the next morning I joined my Regement where I had left them the Day before up the Assanpenk East of Trenton."