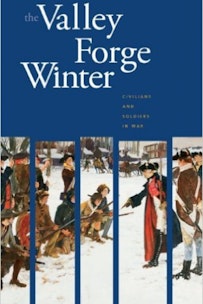 The Valley Forge Winter: Civilians and Soldiers in War by Wayne Bodle

On December 19, 1777, Washington and his war weary troops marched into Valley Forge. The next six months proved to be turning point for the Continental Army. Wayne Bodle's The Valley Forge Winter: Civilians and Soldiers in War presents the story of the winter of 1777-1778 with details that may be new to most readers. Bodle moves beyond the myths and legends that besiege and blur the historical significance of the cantonment. Instead, he uses Valley Forge to explain the complex relationship between the American Army, Continental Congress, state governments, and civilian population during the Revolutionary War.

The following excerpt from The Valley Forge Winter discusses the width and breadth of the American Army's encampment during the winter of 1777-1778. With Valley forge as a headquarters, the Army encircled British-occupied Philadelphia. Troops from both the Continental Army and Pennsylvania Militia manned outposts from Wilmington, Delaware to Trenton, New Jersey. This strategy allowed the Americans to watch over and harass Howe's army throughout the winter. It also helped to keep their supply chains moving. However, the plan had its share of problems.

It is convenient to imagine the Continental Army in terms of the conventional notion that it 'spent' the winter of 1777-78 at Valley Forge, but the reality of its deployment was much more complex. Valley Forge was most importantly the site of 'Head Quarters.' It housed by far the largest single contingent of troops and officers, it was the heart of the logistical system, and it was the place from which orders came and to which most intelligence was sent. Before the systematic training of the regiments began in late March, however, and to a lesser extent thereafter, many important elements of the army's winter mission were conducted along the far-flung perimeter of the British garrison at Philadelphia. The army perched in a broad, crescent shaped configuration along that perimeter. The crescent was thickest at its center, at Valley Forge, and tapered in either direction toward anchoring points on the Delaware River below Philadelphia at Wilmington, and, more tenuously, above the city at Trenton.

The post at Wilmington was hobbled by a supply situation nearly as bad as the one at Valley Forge, by an acute shortage of horses for scouting and security details, and by the poor turnout of area militia. Smallwood's troops staged the army's biggest coup of the early winter by looting the stranded British brig Symmetry on January 1, but the outpost's chief military value was defensive. Indeed, Washington seized the town largely to prevent the British from doing so. The presence of armed Americans in Wilmington forced the enemy to move warily past it on the Delaware River, constrained their mobility southwest of Philadelphia, and provided much intelligence about enemy movements. The post protected the supply and reinforcement lines to the army from the southern states via the Chesapeake Bay, and it theoretically afforded protection to Whigs and discouragement to Tories in Delaware's three counties and in Salem County, New Jersey, across the river. After the excitement of the brig's capture passed, the garrison settled into a period of relative quiescence. Both the problems and the pleasures of life there reflected those at Valley Forge. Smallwood observed that his troops, like Washington's, were 'pennyless, and are dissatisfied and clamorous.' Between alarms provoked by the movement of enemy ships on the Delaware, they passed the time as well as they could. Whenever they saw the opportunity, many of them deserted and went home.

In Pennsylvania, the detachments were small, mobile, scattered, and frequently mounted, and their responsibilities were more varied than at Wilmington. They had more frequent contact with the enemy and almost constant interaction with civilians as a result of their efforts to enforce the embargo between the city and its hinterland. For administrative purposes, and by tacit agreement between the state and Washington, the area was divided by the Schuylkill River, with the respective spheres designated as 'west' and 'east' of the river. Responsibility for covering the west side was assumed by the Continental Army and was carried out by small rotating patrols from Valley Forge. These parries operated largely autonomously, but their overall supervision after Lord Stirling returned to camp in late December fell to Captain Henry Lee of Virginia, who commanded a company of dragoons. Lee took charge of John Clark's intelligence service in January and assumed responsibility for disrupting trade with Philadelphia west of the river and for the camp's security.

Like many officers whose duties involved regular close contact with civilians, Lee recognized the impossibility of completely segregating them from the enemy. He also developed a keen appreciation for the local inhabitants' point of view, for the unfairness with which the war imposed upon them, and for the need to find flexible solutions to these problems. He drafted a plan for consulting with the farmers in his area to mutually determine the amounts of food and forage they could realistically spare for the maintenance of his patrols. Individuals who agreed to deliver their surplus goods to his quarters would be paid for them and given a 'protection' for the rest of their crops. This would relieve the Continental wagon service, Lee reasoned, and farmers would be 'eased from the dread of the forage masters, whose general injudicious conduct afford[s] just cause for murmers [sic] and complaint.'

It is doubtful whether Lee's project was ever implemented, but it would have been greatly appreciated by local inhabitants. Continental authorities later acknowledged that 'plunder' and 'abuses' were endemic within a radius of 'three miles in every direction' from the camp between December 26 and January 6, after which the regular supply system stabilized. This was a conservative estimate of the spatial and temporal boundaries of the looting that accompanied the move to Valley Forge and the collapse of the Commissary Department. John Lesher, a forgemaster at Oley, twenty-five miles northwest of Valley Forge, complained to state authorities that he considered himself 'no more master of any individual thing I possess,' due to his frequent losses to American soldiers and foraging teams from the Continental wagon service. Lesher endorsed the idea of making requisitions proportional to the needs and resources of civilians, as an alternative to the actual behavior of American troops, who 'under the shadows of the Bayonet and the appellation [of] Tory act as they please.' Farmers in his neighborhood were so discouraged, he wrote, that they were threatening not to plant their fields for the coming season. From Trappe, six miles north of the American camp, Henry Muhlenberg could not find transportation because most wagons and horses had been pressed into service for the army. By late January, Muhlenberg observed, there was a shortage of animal fodder 'over almost the whole [of Providence] Township' because of continuous Continental requisitioning in the area.

Considerable evidence suggests that the decision to concentrate Continental resources west of the Schuylkill was initially effective in suppressing rural trade with the city there. Howe's army, like Washington's, became relatively quiescent during the early weeks of 1778. Having retired to winter quarters at the beginning of the year, well stocked with supplies seized on their late-December forays, the British were generally content to let the area's inhabitants assume the risks of the road with whatever supplementary foodstuffs they were willing to sell. Johann Ewald, a Hessian captain attached to a jaeger corps assigned to patrol the inner periphery of the city, observed that by the middle of January 'Washington began to make the highways around Philadelphia so unsafe with [detached} parties ... that the country people no longer dared to bring provisions to market.' The result, Ewald reported, was a precipitous rise in the 'already too high' prices of beef, poultry, milk, and sugar.

By the end of January, Ewald revealed, British commanders found it necessary to resume 'partisan warfare activities ... to protect the country people going to market.' Such activities included a more aggressive policy of British patrolling on both sides of the Schuylkill. These patrols generally found themselves 'surrounded by spies,' however, who helped the Continentals frustrate British tactics. Somewhat more effective were the counterrevolutionary measures organized with the help of-and often on the initiative of-local inhabitants whose political sympathies lay with the Crown. Many of the area's Loyalist inhabitants fled to the protection of the British army in the city. A few organized auxiliary militia units to work in cooperation with regular British army patrols to terrorize their Whig neighbors. Jacob James, from Goshen Township in Chester County, joined the British side a few days before the battle of Brandywine. He served as a guide for the Redcoats and worked as a freelance intelligence officer during the autumn. On December 1, 1777, he received a warrant from General Howe to raise an 'independent troop of light dragoons' among his neighbors. By early January, James unleashed his guerrilla squadron on his enemies. Within six weeks this group had become a scourge to the friends of the revolutionary government in Chester County and a source of protection to Loyalists and opportunistic neutrals, and it had come to the alarmed attention of Continental authorities.