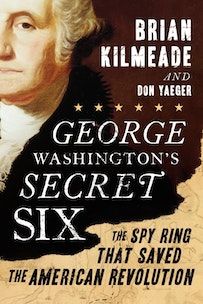 General Washington's military strategy was carried out not only on battlefields, but in the realm of intelligence and counterintelligence. At the heart of these operations was a six-person group called the Culper Spy Ring, whose history has recently been documented in Brian Kilmeade and Don Yaeger's book George Washington's Secret Six. The Culper Spy Ring was headed by Robert Townsend, a Quaker merchant and reporter, but the group members' identities were shrouded in secrecy, even from each other. From a tavern keep to a young longshoreman, these ordinary people carried out extraordinary—and extremely dangerous—work. In today's Read the Revolution, we focus on the spy ring's last recruit: an "avowedly Tory propagandist" named James Rivington, whose New York City coffeehouse and print shop served as a hive for loose-lipped British officers. "

James Rivington, that same enterprising printer, newspaper editor, and coffeehouse owner with whom both Townsend and Andre had a friendship, was something of an American success story—though his path was far from typical. Whatever misfortunes he had suffered in England, his businesses were thriving in the New World and he was a master of spotting new opportunities. By the middle of the 1770s, his New York-based newspaper was being read at least as far south as Baltimore. When the sparks of revolution became the full-fledged flames of war in 1775, however, Rivington's shop was looted and burned by the Sons of Liberty, with some of his presses and typefaces being melted down for ammunition. He moved his family back to England for their own safety, then returned to New York in 1777, where he opened his businesses near Townsend's shop.

"While Rivington was away, his surviving presses were busy serving the king without him. On June 26, 1776, a counterfeiter named Israel Young testified to having heard from a trusted source that a ship in New York waters, the Duchess of Gordon, had been the site of a counterfeiting workshop. What was more, Young recounted, the work was overseen by none other than New York's colonial governor, William Tryon. Young swore that he heard from his source that 'he had also seen Gouvernour Tryon often, and that the Gouvernour would talk very free with them; that they had on board a number of Rivington's types and one of his printers.' The source 'received a letter which he said was from the Gouvernour, and also some water-work money, which he said they counterfeited on board the Duchess, and he himself had seen them printing it off; that they had a chest of it.'

"Whether it was with Rivington's knowledge at the time or not, his name was thus linked with the counterfeiting trade and he undoubtedly drank free in British circles afterward for having such a reputation. Any rumors of counterfeiting schemes circulating among the British officer corps of New York would have certainly been considered of interest to Rivington, and he may have even been consulted as to the best way to carry out the endeavor. With Townsend in his employ and frequenting the coffeehouse, word of the plan could have easily slipped out either accidentally or as a matter of interest to the curious part-time reporter.

"As it turns out, there was much more to James Rivington, 'Printer to the King's Most Excellent Majesty,' than met the eye. At some point following his return to America from England at the end of 1777, it seems that his loyalties shifted. It remains unclear whether he was driven by a change of heart toward the American cause, a desire for monetary gain, or simply frustration at the Crown's objections and prohibitions to his printing criticisms of the leadership of General Howe in the autumn of 1778. But what is certain is that Rivington secretly threw in his lot with the Americans and began to work alongside Robert Townsend gathering information and conveying it outside the city to General Washington's waiting hands.

"Rivington's name was the last to appear among the Culper code monikers, 726, indicating that Townsend had recruited him soon after his own engagement, probably by the late summer of 1779, when the code was developed. The code first lists the spies' names, concluding with Rivington as 726, then seamlessly moves on from personal names to place-names, with New York designated as 727. How so cautious and reserved a man as Townsend was able to establish a confidence with an avowedly Tory propagandist is hard to imagine. Once the connection was made, however, Rivington's mischievous nature must have delighted in the irony of his recruitment. This was the same man, after all, who found great amusement in seeing himself hung in effigy and who happily reprinted damning letters about his character from Patriot circulars in his own newspaper.

"His unconventional humor aside, Rivington proved a valuable asset to Townsend's work. Taking advantage of his profession, he provided books for the spies' use. Sometimes the books' bindings hid slips of paper holding intelligence Rivington himself had gleaned from his Loyalist guests and friends.

"Several years later, William Hooper, a North Carolina lawyer who had signed the Declaration of Independence, wrote to his friend and future Supreme Court justice James Iredell: It has come out as there is now no longer any reason to conceal it that Rivington has been very useful to General Washington by furnishing him with intelligence. The unusual confidence which the British placed in him owing in a great measure to his liberal abuse of the Americans gave him ample opportunities to obtain information which he had bountifully communicated to our friends.

"The British were being played, and from the least likely of corners. But they remained oblivious to the double-dealings in their midst. The parties went on, the coffeehouse debates continued as the officers went about surrounded by their circles of admirers... The wine and the words flowed freely as they bantered about their plans. The army was in garrison—comfortable, amused, and completely oblivious to the fact that any shopkeeper, newspaperman, or charming lady in their midst was listening, remembering, and plotting."