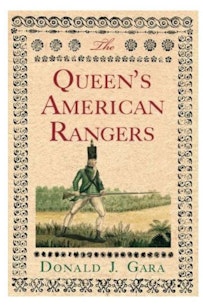 Present at the battles of Brandywine, Monmouth, Charleston, and Yorktown and known for their green uniforms and unconventional, yet effective military tactics, the Queen’s American Rangers operated as one of the most successful Loyalist regiments throughout the Revolutionary War.

The following excerpt from Donald J. Gara’s, The Queen’s American Rangers, details Simcoe’s efforts to remake the unit in 1777 during the early months of the British occupation of Philadelphia.

Simcoe began reorganizing the Queen's Rangers. He created a distinctive highland company, complete with kilts and a piper, the command of which was given to Captain John McKay. A small hussar troop was also organized, consisting of twelve volunteers detached from the various companies, command of which was given to Sergeant Benjamin Kelly, a deserter from the American army. Horses an.cl equipment for the troop were furnished by Brigadier General Sir Willian, Erskine, commander of the British and Hessian mounted troops, but they were not of the best quality, consisting mostly of hand-me-downs from the regulars.

Now that the vacant officer positions were filled and the new recruits trained in the basic use of musket and bayonet, Simcoe proceeded to put into effect his long-considered tactical theories and ideas. He disregarded the regular British practice of grouping men by size and appearance within companies. Instead, he issued instructions that the two files (rows) in the center and the two on each flank of every company would consist of seasoned soldiers with the inexperienced rank-and-file enclosed between them. On the move, the battalion would always march in three groups, a hundred yards from one another, so as to make it more difficult for any enemy to ambush the entire force. For additional protection, the hussars would lead the march in advance of the infantry, followed by the light company, with the grenadiers and highland companies on the right and left flanks. To reduce the chance of loose tongues alerting the enemy about when, where, and how they were going to march, secrecy would be maintained until the last moment before setting out on patrol. Written orders would be kept at a minimum, and the ranger officers would be verbally instructed as to what was required of them to eliminate possible misunderstandings or misinterpretations. All written orders would be delivered to the rank-and-file at daily parade.

Simcoe's tactics for attacking an enemy would vary depending on circumstance, but the basic attack formation would place more emphasis on the use of the bayonet as follows. The light company, in the lead, would fire one or more volleys to disorganize the enemy, and then the battalion companies, kept thirty feet behind, would charge with fixed bayonets. To ensure that the rank-and-file of the battalion companies used their bayonets, their muskets would be kept unloaded. The grenadier and highland companies, with loaded muskets, would protect the battalion's flanks and engage the enemy wherever possible.

In the regular British army, officers had little personal contact with their men. Supervision and training were generally left up to the noncommissioned officers. Simcoe required all ranger officers to keep themselves informed of the proper care and cleanliness of their men. As an added measure, commissioned officers were placed in charge of all guard details as added insurance for better camp security.

The ranger officers were informed that assignments would be given to whoever was the most capable of carrying out those orders and not simply to the most senior officer available. Merit, not seniority, would be the road to advancement in the corps. In addition, the importance of any mission would not to be judged based on the number of men assigned to it, but on the nature of the assignment.

In between training and instruction, the Queen's Rangers made frequent patrols in the Kensington and Frankfort areas. Their main task was to ensure that the Bristol Road be kept open for traffic (to and from Philadelphia) to enable the local farmers to bring their produce to market. To win and keep the support of the local inhabitants, Simcoe forbade his men to do any marauding in the area. Since words were not always enough, Simcoe would often halt his men for rest periods in a wood, keep them in ranks, and send guards to watch over nearby houses. The battalion companies would generally average ninety miles a week, or thirteen miles a day; when they also marched with the three line companies, they would march even farther. The patrols were not always uneventful, for frequent skirmishes with American militia occurred. The militia was usually engaged in trying to stop the flow of produce into Philadelphia, but they also attempted, whenever possible, to obtain intelligence for Washington's army.

The rangers, accompanied by thirty men of the 16th Light Dragoons under Lieutenant Thomas Pidcock, attacked a party of militia encamped at Frankfort village in early November. They began their march at midnight and eventually arrived at the rear of the Jolly Post Tavern, where the militiamen were quartered. In the process of taking positions behind the building, they were spotted by nearby militia sentries. These men fled into the woods, seeing that they were cut off from the tavern. They fired no shots to warn their compatriots and Were not pursued. The Queen's Rangers moved into position behind the tavern while the British dragoons went out to the road in front to Position themselves at the tavern's entrance. The militiamen within Were taken completely by surprise and surrendered without a fight. One officer and twenty men were taken prisoner, with two or three slightly wounded in an abortive escape attempt.

Simcoe was not bloodthirsty. He generally preferred, when on Patrol, to take prisoners rather than just kill the enemy. Whenever Possible, he would try to prevent unnecessary killing. It was a frequent practice for soldiers of both armies to plunder not only the dead and wounded but also to rob prisoners of their possessions. Simcoe issued orders that the rangers were not to rob prisoners-especially of watches, which were a favorite piece of booty. He was later obliged to reconsider this rule when he overheard one of the ranger rank-and-file stating that it was not worthwhile to take prisoners. Simcoe considered that protecting a prisoner was a point of honor, and a more important duty than trying to prevent a captive having his personal possessions forcefully taken away from him. A particular instance of Simcoe 's concern for avoiding unnecessary bloodshed was when, on approaching an American militia post in the Frankfort vicinity, he sent word to the sentinel to immediately quit his exposed post to avoid being shot. The sentry took the hint, and from then on the militia avoided maintaining fixed posts within the patrol area of the Queen's Rangers.